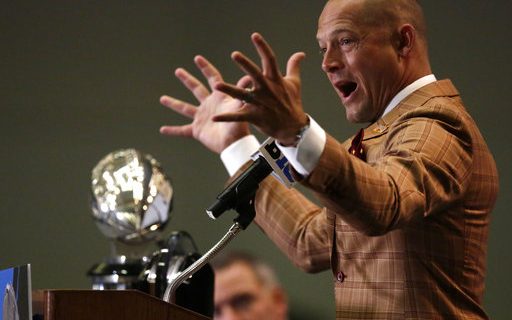 Buffalo Bills coach Sean McDermott often says “Respect the Process.”  It’s displayed all over the walls at One Bills Drive.  The walls at UB’s Murchie Center may not have that exact wording, but the message applies there too.  As Lance Leipold enters his third season as the Bulls coach tonight against Minnesota, his process is ready to take another step forward.  The third year is an important season for a head coach.  Year one is inheriting another coach’s team and instilling the new message. Year two is rebuilding, adding players that fit that coach’s vision.  Now, year three is when those players will assume key roles and develop a winning attitude.  This year’s Bulls roster has a majority of players that Leipold and his staff have recruited. While still young veterans, they will lead the Running of the Bulls towards success.

It starts against a Minnesota team going through a similar rebuilding.  Exuberant and excitable P.J. Fleck has come from Western Michigan to, in his words, “awaken a sleeping giant” in Minneapolis.  That means new schemes, new players and a lot of uncertainly not often found in a team that won nine games and a bowl the season before. He even brought his “Row The Boat” slogan with him.  Makes sense, now that he’s in a state with 10,000 lakes.

Fleck played at Northern Illinois, spent 2 seasons playing receiver in the NFL with the 49ers,  coached at Ohio State, Rutgers, and the Tampa Bay Buccaneers before getting the job at Western Michigan.  He’s one of only two Power 5 coaches to have played and coached in the NFL.  Can you name the other?

The excitement about the Bulls offense is focused on quarterback Tyree Jackson, and the heights he can reach.  Yes, that was an intended tall tale.  Now up to six-foot-seven, the sky’s the limit for the sophomore.  Last year, in his 9 starts, Jackson showed the glimpses of his immense talent as he became the first Bulls freshman to throw for 300 yards in a game while also finishing second in rushing.  Now, he’s ready to take the next step by being more consistent, cutting down on the interceptions and finishing drives.  Unlike last year, Tyree spent the entire offseason and preseason knowing he’ll be the starter.  That’s been a huge boost for his confidence, his preparation and his repetitions.  With the help of new quarterbacks coach Jim Zebrowski and an offense that will make him comfortable, Jackson should continue towards what former Bulls QB Joe Licata told The Buffalo News: “the first quarterback drafted out of UB.”…Jackson will have mostly new weapons on offense.  Last year’s top three receivers are gone, and their 121 catches, are gone.  But the group of six wideouts and two tight ends that the Bulls will play should be an upgrade in speed, quickness and big-play ability.  The intriguing new receiver is Anthony Johnson, a junior college recruit who redshirted last year.  He’s the Bulls fastest player, and he looks like an NFL player.  That’s partly because his cousin is Texans star Jadeveon Clowney…Athletic Tyler Mabry moves up to replace Mason Schreck at tight end. Backup Zac Lefebvre has opened eyes in the spring and preseason…Jordan Johnson is now a Buffalo Bill, so the next running back up is Johnathan Hawkins.  UB’s most highly-touted recruit get his chance to be the next great UB ball carrier.  The school has had a 1000 yard rusher in six of the last 10 years.  Compact Emmanuel Reed will also get some carries.  At five-foot-eight, he’ll reminder you of Branden Oliver with his ability to get lost behind the line…Speaking of the line, four starters return.  Center James O’Hagan.  The only new starter will be left tackle Evan Ksiezarczyk, who beat out massive transfer Jacquis Webb to win the job…Minnesota returns six starters on defense.  Defensive tackle Steven Richardson is an NFL prospect who had seven sacks and 41 QB pressures last year.  His position coach?  Former Bills linebacker Bryce Paup…There’s another Bills connection in the Gophers secondary.  Antoine Winfield Jr, the son of the former Bills first round draft pick, is an emerging player at safety….The other starting safety, Duke McGhee, will miss the first half due to a targeting penalty in the fourth quarter of Minnesota’s Holiday Bowl win in December….Linebacker Jonathan Celestin was second on the team in tackles in 2016.

The Bulls return eight starters on defense.  That experience should allow the unit to perform better and fix some of their issues from last year.  It must start with stopping the run.  The Bulls allowed a 100-yard rusher in seven of their twelve games last year.  To combat their trouble controlling edge plays and quarterback read-options, the Bulls moved Ishmael Hargrove from his rover position and inserted quick and athletic Jordan Collier.  Hargrove will rotate with Jarrett Franklin at linebacker.  Collier will focus on stopping the run, but his speed should shut down the corner…It’s hard to think that Khalil Hodge can add top his 123 tackle, 2nd Team All-MAC season.  But he’s bigger, stronger and smarter as the Bulls man in the middle…Demone Harris and Chris Ford return on the defensive line, joined by experienced backups Justin Brandon and Chuck Harris.  Both Harris boys look ready for a breakout season.  Freshman Malcolm Koonce will see time as a pass rusher…The secondary returns three starters.  Safety Ryan Williamson is the most experienced Bull, with 24 starts.  Tim Roberts, the Bayou Banger, led the team in interceptions last year.  Cam Lewis will be the Bulls top coverage cornerback.  Tatum Slack and Brandon Williams will battle to start.  Look for newcomer Devon Russell, a transfer and former Eastern Michigan player, to be a key coverage contributor…Minnesota has the least experienced quarterbacks of any Power 5 team.  They will use two.  Senior Connor Rhoda has played in five games, with one start.  Sophomore Demry Croft has three games and no starts.  Because of that, expect the Gophers to rely on their outstanding running game.  Rodney Smith ran for 1158 yard and 16 TD last year.  Backup Shannon Brooks totaled 650 yards…When Rhoda & Croft throw, they’ll be doing it to an inexperienced group of wideouts.  But there are good tight ends.  Brandon Lingen had 33 catches and 2 100-yard games in 2015.  Nate Wozniak, at six-foot-ten, is the tallest skill position player in the NCAA.

When the Bulls lost at Western Michigan late last season, everyone expected Fleck to move on to a bigger job.  I’m not sure Bulls fans expected him to go to Minnesota, and then face the Bulls twice in three games.  Fleck’s move to the Big 10 has been a boost in publicity for a Gophers program that fights the Vikings, Twins, Timberwolves & Wild for Minneapolis attention.  His “Being PJ Fleck” TV show ran for a month on ESPNU.  He will wake up the program just like he did at WMU.  Keep this in mind.  The last time the Bulls faced Fleck while he was rebuilding a program during his first season, they beat the Broncos 33-0 in 2013.

It’s another Big 10 coach, and a famous one.  Michigan’s Jim Harbaugh joins Fleck as the only other Power 5 head coach who has played and coached in the NFL.  Harbaugh played with 5 NFL teams, and was the former head coach of the 49ers.

Please join me, color analyst Scott Wilson, game host Brad Riter and postgame host Bob Gaughan for the broadcast on the Bulls Football Network.  Our pregame show starts at 6:00pm.  You can hear it in Buffalo on ESPN 1520 and in Rochester on Fox Sports 1280.  A link to the online broadcast is also available here and on the Tune In app.