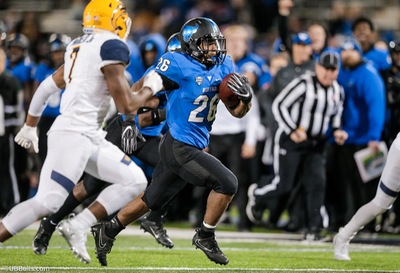 Bulls RB Jaret Patterson will be a key player as UB tries to clinch the MAC East title Wednesday at Ohio. (UB Athletics)

Lance Leipold might want to send Miami Head Coach Chuck Martin a trophy or some other token of appreciation. The Redhawks win last week over Ohio completely changed the impact of Wednesday’s Bulls-Bobcats game. Had Ohio won, this game would have been the MAC East championship game, with the winner basically getting the title. Instead, the Bulls are in the driver’s seat for the division title, no matter what happens in Athens. All UB needs is one win in their last two games to clinch a spot in the MAC Championship game. That can come against the Bobcats, or next week against last place Bowling Green.

But ask Leipold, or his players about this and you get one answer. They want to win both games. They don’t want to wait, they want to clinch the title in this game. Doing that against their main division rival, in a stadium they haven’t won at in ten years, is the next step in this magical Buffalo season.

“The only difference is what we can be. So this week is the same as every other week. We’ve just got to go 1-0 for the week. Going 1-0 has helped us so far,” says Bulls senior defensive tackle Justin Brandon.

Bull Session Trivia: With 763 yards, Jaret Patterson is 154 yards away from the UB freshman rushing record. What player set that record back in 2002?

On the first play of the Kent State game, Patterson gained seven yards and nearly broke it for more. So what did Offensive Coordinator Andy Kotelnicki do? He called the same play. This time, Patterson did break free for the 64-yard touchdown that set the tone for the dominating win over the Golden Flashes. Patterson referred to that tactic as “groundhogging” it. I assume that’s a reference to the Bill Murray classic movie Groundhog Day, where he lives the same day over and over again…On those first two plays, the Bulls came out with 359-pound tackle Jacquis Webb as a tight end and extra blocker. He was joined in the formation by 260-pound fullback Jake Molinich. Both threw key blocks to spring Patterson for the big gain. With the weather and focus on running the ball, Molinich saw his most extensive action. Leipold on his fullback: “You talk about a guy with a lot of energy, all about the program, willing to do anything. He’s a physical player who embraces contact.”…Also a key on those plays were blocks by right guard Jacob Gall, who was starting for the first time. He continues to see more action at both guard positions…Patterson’s 187 yards are a freshman record, and the second most yards in a game by any MAC player this season…Five different players scored rushing touchdowns in the game. Emmanuel Reed and Theo Anderson got their first scores of the season…Freshman Dylan McDuffie carried six times for 16 yards. With the new redshirt rules, that appearance won’t prevent him from still using this as a redshirt season…Same for QB Kyle Vantrease, who made his second appearance of 2018. He can play in two more games and still preserve the season…Anthony Johnson’s TD catch gives him nine, and leads the MAC. He’s got six scores in his last three games…The crazy wind limited the passing game, but Tyree Jackson’s TD pass keeps him 10th in the country. He’s also run for six touchdowns in the last five games…The Bulls have scored 30 or more points in eight of their ten games. They are outscoring teams in the first quarter 110-37…Ohio’s defense does give up yards, especially through the air. They rank 8th in the MAC overall, but 11th against the pass. Although in conference games, they are giving up 70 less yards a game…LB Evan Croutch is the leader of the Bobcats defense. He is the top tackler, and his 9.5 tackles for loss rank 8th in the MAC…Safeties Javon Hagan and Kylan Nelson are the strength of the Ohio defense. Both are All-MAC level players, who have combined for over 100 tackles and 3 interceptions…Ohio is young at cornerback. They start a pair of sophomores in Marlin Brooks and Jamal Hudson…The Bobcats have 11 interceptions from eight different players. The have forced 24 turnovers, which is 4th in the country.

Bullet Points: 4. That’s where Patterson ranks among all NCAA freshman running back in yards gained this season.

The level of domination by the Buffalo defense was staggering against Kent State. The Bulls forced punts on the Flashes first 10 drives. Seven of those were three-and-outs. KSU had only 34 total yards through three quarters, after the Bulls held them to 1 yard in the second and -5 yards in the third…Matt Otwinowski, making his first start, had a team-high eight tackles. He was starting because Khalil Hodge was suspended for targeting. To think that there was no drop-off at the position is amazing…Hodge played only six plays once he came back for the second half. He finished with only one tackle, giving him 388 for his career. He is close to becoming just the fourth Bull with 400 tackles in his career…Justin Brandon had a career-high two sacks. As he pointed out, those were the first solo sacks of his career. “Justin is one of the unsung players in our program, and one of the players who have helped turn our program around. Our program would not be where it’s at with Justin Brandon,” says Leipold…Brandon’s sacks came because of pressure from Chuck Harris, who returned after missing two games…The Bulls are 11th in the nation in pass defense…They continue to dominate the MAC defensive stats: #1 yards allowed, #3 rushing defense, #4 passing defense, #2 third down defense, #3 sacks, #2 interceptions…That’s big reason why defensive coordinator Brian Borland has been nominated for the Broyles Award, given to the nation’s top assistant coach…Ohio will be the Bulls biggest challenge of the year. The Bobcats lead the MAC in points, yards, rushing yards and third downs. They average 39 points per game…The Ohio offense is led by dynamic QB Nathan Rourke. The Oakville, Ontario native leads the conference in total offense and passing efficiency. He is the #6 passer and #7 rusher. Last year, in the season finale, the Bulls defense did a pretty good job on him. But Rourke still ran for two TDs and passed for one…Rourke averages 14.5 yards per completion, which is 8th in the country. That’s an indicator of Ohio’s big play offense. Rourke’s ability run the ball sets up those big plays…His favorite target is versatile Papi White. The speedy wideout has eight scores this season, and ranks 4th in the MAC in yards…RB A.J. Ouellette is a familiar foe for Bulls fans. He ran for 155 yards against UB back in 2014, his freshman season. He is Ohio’s 4th all-time leading rusher. This season, his 777 yards rank 3rd in the MAC…Backup Maleek Irons and his 614 yards rank 5th…The Bobcats have a veteran offensive line, led by the left side of Joe Lowery and Joe Anderson.

If lack of penalties is an indication of smarts, discipline and coaching, then this game features the two best-coached teams in the MAC. Not a surprise with Leipold and his former mentor Frank Solich running the sidelines. Buffalo and Ohio are 1-2 in fewest penalties, and most penalties by their opponents.

Both teams average around five penalties a game, while their opponents average eight. For the Bulls, the difference is in the yardage. It gets UB an extra 37 yards per game, based on the penalty yardage. It’s something that pleases the Head Coach.

“I am extremely proud of it. From a head coach’s perspective, it comes from the little things we demand from our guys…I think it’s how we practice, what we demand, what we won’t tolerate in practice. We consistently build the habits that help us not beat ourselves.”
So don’t expect to hear much, or see much of the MAC referee in this game. That’s usually a good thing.