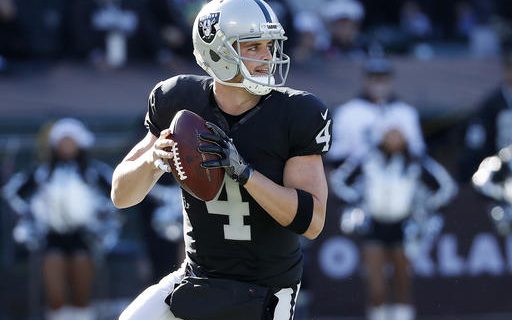 Oakland Raiders quarterback Derek Carr (4) drops back to pass against the Indianapolis Colts during the first half of an NFL football game in Oakland, Calif., Saturday, Dec. 24, 2016. (AP Photo/Tony Avelar)

A few weeks ago, as I was reading the coverage of Kirk Cousins’ contract situation with the Redskins, I thought about how it related to the Bills handling of Tyrod Taylor’s contract. I see some similarities in how both teams made their decisions. The Bills don’t appear to believe Taylor is a QB who can get them to a Super Bowl, or even the playoffs. They refused to commit huge money to him, and it seems as though no one else was willing to do it. That’s why Tyrod is back in Buffalo under a “prove-it” deal. Same with Cousins. My take is the Redskins don’t think he’s the ultimate answer at the position, and aren’t willing to pay him long-term.

Basically, both teams ranked their quarterbacks and based on those rankings, are refusing to pay top ten or even top five money to players who don’t rank in those spots. So it got me thinking about how I would make my own quarterback rankings. So here it is. I present this without specific comments. I’ll save that for another post. The QB’s are not ranked based on any statistic or analytical formula. Just one guy who’s seen and covered a lot of football, and knows a good quarterback when I see one.

Ultimately, my point is if I’m the Redskins or the Bills, I’m not paying big money for the #17 or #20 ranked quarterback. I’m looking to find a top ten guy.
Agree with the list? Disagree? Go ahead and give me your feedback.