They're off at the Grassroots Garden race in Niagara Falls.

I didn’t shout that out when I arrived at Grassroots Garden 5K race at LaSalle Waterfront Park at Niagara Falls on Saturday morning. But inside, I felt like it.

I was about to take part in my first road race in more than a year. My last previous race was the Shamrock Run in March of 2020 – a forever ago. Then the pandemic struck, and races fell off the calendar like leaves after a windstorm in late October. I still ran every other day around the neighborhood, but it wasn’t quite the same. I’ve done as many as 50 races in a calendar year, and I’ve gotten to know “the regulars” who show up at races, well, regularly.  In other words, I missed my running friends.

So it was nice to be back at an actual race, even if it wasn’t a typical race by pre-2020 standards. Organizers opted to stage three different races – a 15-kilometer run, 10-kilometer run, and 5-kilometer run, one after another. The original idea was to send people off in waves of 50 people (at most) along the riverfront trail in Niagara Falls. That probably happened earlier in the morning. But by the time it was the 5K runners’ turn, the starter was simply sending the runners off one at a time. With computer chips involved, it didn’t matter when I started or finished. Therefore, I started my 10:30 a.m. race at 10:10, which was great since I didn’t have much to do while waiting to get going.

Everyone was wearing some sort of mask at the start/finish line area in the park. However, we were free to remove them once we started running – especially since there was no one around. It didn’t really feel like a real race without the anticipation of a group start. If anything, it felt more like a leisurely run through a crowded park. Some runners passed me, and I passed some runners. But the view of Niagara River was excellent, and more importantly the view was different than my usual route from my house. There were a few waves and fist bumps along the way from such people as Ed Russell, who greeted me with an enthusiastic “Where have you been?” as we approached each other in different directions with an unmasked smile.

The finish line was still a welcome sight, as it always is, and bottles of water and turkey wraps were available a few steps from it. The days of a three-course meal after a race appear to be a ways down the road, but that’s fine.

What’s up the road?

Afterwards, a few of us launched into a spirited, socially distanced discussion about the future of road racing in the short term and the long-term. In my opinion, things are going to be different.

At this moment, it’s difficult for many spring and summer races to be staged. Yes, they can be run with precautions such as masks and staggered starts, particularly if they are on a self-contained course without traffic problems. But most races don’t fit into that category. They are held on actual streets, with the event turning into something of a festival. To stage such a race of that description is probably going to require a police presence and a permit. However, it’s fair to say that races are not exactly a priority of the authorities at this point. What’s more, we don’t know exactly when those authorities will take up the issue and start approving them.

The problem is that there is lead time involved. Let’s take the WNY Running Hall of Fame race on Labor Day weekend. (Note: I’m on the Board of Directors.) We can’t afford to take the necessary preparations and pay the costs for staging a race – permits, shirts, etc. – without being 100 percent that the race will take place. Most races are in the same boat. I would guess that everyone would need a two-month window to know if the show can go on. So in this case, we’d better have an idea by July 1. This can be applied to other races as well. I would guess some of the events in June are in jeopardy right now.

Once we get into a time that is approaching some sort of normal, the discussion changes. It looks to me as if the running calendar will become much less crowded for the next two years. Experience tells us that once a race takes a break for whatever reason, it’s difficult to restart the event down the road. Most just die off. An annual race is necessary to generate enthusiasm among sponsors and volunteers. Buffalo has had a very crowded race calendar for a couple of decades, especially when compared to cities of similar size.

The big races will do fine. The YMCA will continue to sponsor the Turkey Trot, the Shamrock Run will go on every spring, and so forth. But there will be some pruning of the calendar. I would guess the number of races could fall to 50 percent of pre-pandemic levels, and it will take a few years to reach those numbers again. (Footnote: I hope I’m wrong.)

While on the subject of difficult predictions, the future of the “virtual race” is cloudy as well. That’s where runners cover a certain distance, send in a time and a check, and receive a finisher’s medal and a premium item (usually a shirt) in return. It does keep awareness of the race going, and brings in some revenue during this dark period.

I have entered in some virtual races in the past year. Some of them have been local events, as I consider an entry something of a charitable donation to organizations that are trying to keep races alive. The rest of them have been out-of-town races, featuring places I’ve enjoyed visiting in the past. I’ve run virtually in Boulder, Colorado; Olympic National Park; Kinzua State Park (Pa.); the Drake (Iowa) Relays; and Canton, Ohio (Pro Football Hall of Fame).

No one believes that a virtual race is a good substitute for the real thing. It’s a bit on the sterile side, as it’s more of a good deed than a good time. Even so, the big races across the country might see this as a relatively easy way to raise extra money even with a full house of runners participating. Therefore, I wouldn’t count them out quite yet.

Road races feature two basic traits of human nature: the need for physical activity, and the need to socialize. Those won’t go away, but it’s going to take some time before we all won’t think twice about signing up for an event. In the meantime, just taking part in a race is, naturally, a big step forward. 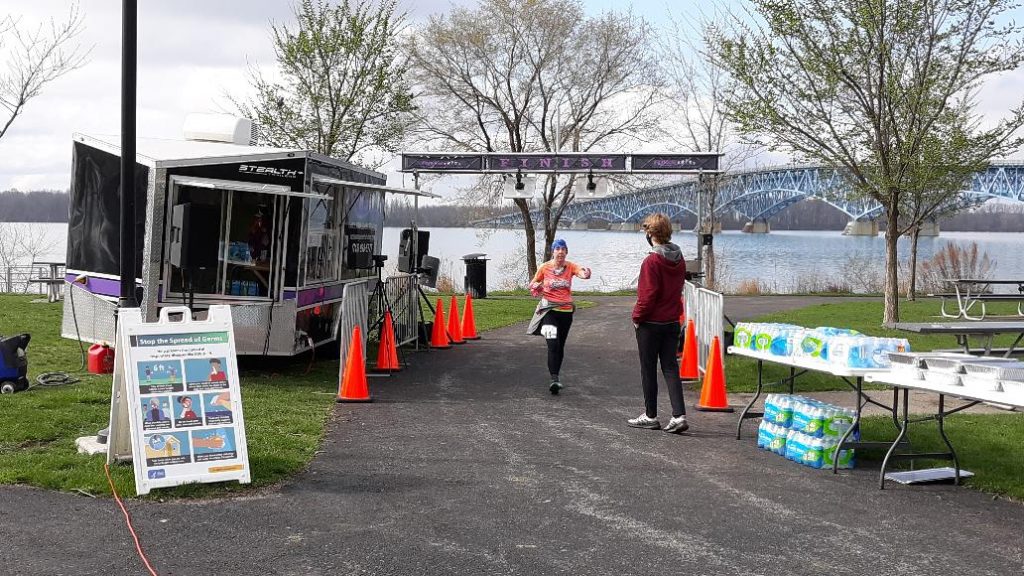