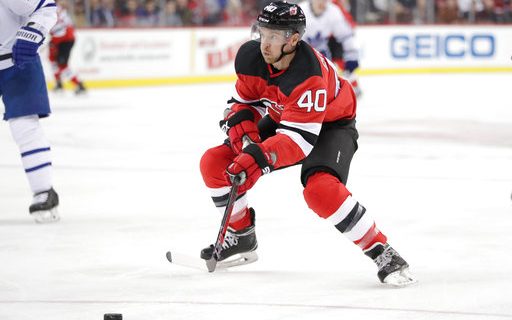 Devils right wing Michael Grabner had 27 goals last season, with none of them coming on the power play. (AP Photo/Julio Cortez)

About 25 years ago, I was looking at the then-incomplete statistical record of Gary Roberts. He had scored 53 goals in 1991-92, something that was a bit of a surprise since he only had 22 the season before. I noticed that had 22 goals in both 1989-90 and 1991-92, with a 39-goal season in between. Was a good goal total without a power-play tally a way to predict that a particular player was ready to score offensively?

Probably not.  But when making up the list for 2017-18 of the top goal-scorers of those without a power-play goal, the name on top jumped out. Michael Grabner of the Devils had 27 goals without getting one with an extra teammate on the ice.

Grabner has had a really odd-looking career. In 2010-11, his first full season as an NHL player, Grabner scored 34 goals for the Islanders. Only two of them came on the power play. But he had 27 more goals without a power-play score in 2016-17, and had the same exact number this past season.

Here is the list of the top 10 in the NHL in this category, and Grabner is the dominant player again for whatever reason.

For the sake of comparison, I went through the Sabres’ all-time list of goals in a season without a power-play score. Grabner would have set a Buffalo team record had he done this for the Sabres. The names on the list describe similar types of players who are classic “two-way” performers – good on offense and defense. You’d think Don Luce, Craig Ramsay, Scott Arniel and Wayne Presley would fit that description, and you’d be right.