Just another summer day for Sabres 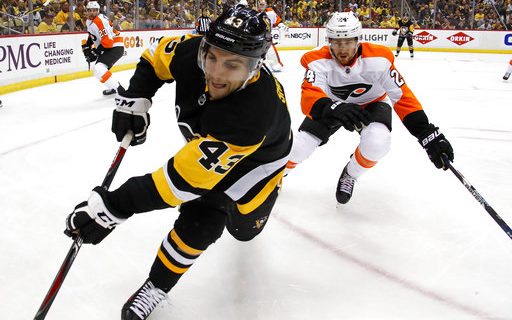 Ah, summer – when the living is easy and thoughts turn to … hockey?

In this case, yes. The Sabres had themselves a busy June 27 by most standards. They added a couple of players in a trade with the Pittsburgh Penguins, and drew a near-capacity crowd to HarborCenter for a rookie practice.

That’s right. A practice. But it did feature the debut of Rasmus Dahlin wearing No. 26 with a Sabre logo, so that’s a little noteworthy.

But first, the trade. Coming to Buffalo are left winger Conor Sheary and defenseman Matt Hunwick. According to reports, the Sabres will give up a fourth-round pick in 2019 that could turn in to a third-rounder if certain conditions are met.

“We were looking to improve out even-strength scoring,” general manager Jason Botterill said. “What I’ve always liked about Conor’s game is that he’s been in playoff situations and had success. He creates a lot of chances. I’m excited about bringing him to the organization. Matt is a guy I’ve followed over the years, and how he handles himself as a pro. I think he’ll help out our group.”

Sheary, 26, has a decent scoring touch. Last season, he had 18 goals and 12 assists for 30 points. The season before, Sheary had 23 goals and 30 assists for 53 points. He is 5-foot-8, 175 pounds. He’s played with center Sidney Crosby, so he knows how to work with a talented linemate. Sheary will be given every chance to provide some offense on the wing in the coming season.

“You’re always looking for guys to add to our group, especially on the wing – to add skill,” Botterill said. “He knows how to play in pressure situations against other teams’ top defenders. We’re bringing in players with playoff experience.”

Hunwick, 33, will be coming to his sixth NHL team when he arrives in Buffalo. He had 10 points in 42 games with the Penguins in 2017-18. Hunwick has also played with the Maple Leafs, Rangers, Avalanche and Bruins.

Both players are considered fast, and a little speed – particularly from a forward – will be appreciated by the Sabres.

The Penguins reportedly were looking to clear salary cap space with free-agent season about to begin. They save more than $5 million for each of the next two seasons with this trade. They reportedly spent some savings when they agreed to terms with free agent-to-be Jack Johnson later on Wednesday.

Meanwhile, the Sabres opened their summer development camp Wednesday afternoon in HarborCenter. Mr. Dahlin was the center of attention among everyone in the building; he probably needs to get used to that for a while if he hasn’t done so already.

Dahlin showed his skating, stickhandling and shooting abilities during the hour-long workout. At one point, he came down the right wing on a drill and zipped a shot into the far top corner – which drew some favorable reaction from the fans.

“Awesome – it was fun training with the crowd,” Dahlin said about the public session.

The players finished their workout around 3:25 p.m., and raised their sticks to salute those in attendance – and received a warm round of applause for the gesture.

The sessions run through Saturday.