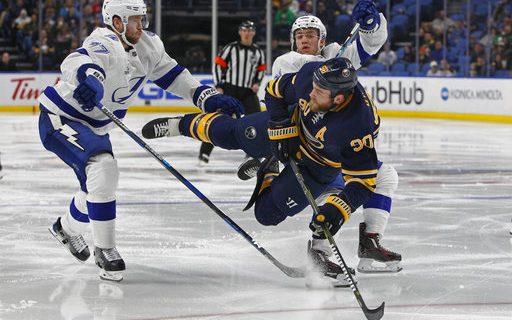 All right, no one is suggesting for a minute that the Buffalo Sabres are a better team without Jack Eichel. He’s been their best player throughout the season, and he is their best long-term hope to lead them into a brighter future.

Yet … Eichel has missed almost three full games with a high ankle sprain, and the Sabres have won two of them – against top teams no less. Buffalo defeated Tampa Bay, 5-3, Tuesday night, before 16,530 in the KeyBank Center. It was only three days after a win against Boston on Saturday night. For a moment, the Sabres have rallied the troops in the face of adversity.

“Our guys did a terrific job,” summarized Sabres coach Phil Housley, and he was right in a large number of categories.

The list starts with special teams. The highlight of the game came in the middle of the second period, when Johan Larsson and Zemgus Girgensons earned minor penalties only seven seconds apart. That gave a powerful Tampa Bay offense one minute and 53 seconds of a five-on-three advantage. Would the league’s second-best power play get one goal or two with such an edge?

None of the above, thanks in part to some great shot-blocking.

“The rest of the guys were inspired by that,” Housley said. “All of the penalty-killers played terrific. They controlled time and space.”

The power play was solid as well. Sam Reinhart and Ryan O’Reilly both had scores with the man-advantage. It was a throwback to last season, when Buffalo had one of the best power plays in the league.

“It took us a while to find that confidence,” O’Reilly said. “We’ve been working hard with that extra man on the ice.”

O’Reilly had his second straight monster game for Buffalo. He finished with a goal and two assists, and went 25-17 on faceoffs. O’Reilly’s ice time was 24:41 for the night, as he’s clearly answered the call created by Eichel’s injury.

“That really helps in finding a rhythm,” O’Reilly said about the extra work. “The line is playing great. Sam and Benny (Pouliot) were outstanding. The puck is finding them, and that’s what we want.”

“He’s stepped up with Jack out in all phases of the game,” Housley said about the two-way center.

Reinhart also had an empty-netter, and now has 16 points (six goals, 10 assists) in his last 13 games. As you could guess, his confidence is high right now.

“For sure – I can hang on to the puck a little more – little things like that,” Reinhart said. “When I score early in the game, I can build on that.”

In goal, the Sabres had the edge as Chad Johnson outplayed Tampa Bay’s Louis Domingue. Johnson was the first to say he had some help.

“They generated some chances off the rush,” he said. “I’m not one of those who dive all over the place and get on the highlight reel. Guys battled hard in front of the net, and that allowed me to see the puck. They blocked a lot of shots. It was a real team effort.”

There’s one last point to be made. Suddenly the Sabres are getting scoring from a variety of sources. Nicholas Baptiste and Scott Wilson had goals against the Lightning. The team’s chances improve when someone besides the members of the first two lines can score, and that has happened very infrequently this season. Buffalo has at least four goals in its last four games. That hasn’t come close to happening all season.

All right, the Sabres have rallied a bit in the face of adversity. You can wonder where that’s been for much of this difficult season. But Johnson is willing to take good news whenever it comes.

“We played a strong game tonight,” he said. “We got the fans in it. We got the energy of the crowd on our side. We kept that for most of the night. It’s huge to have that success. We want to build on that. We want to have that same energy going into Ottawa (on Thursday).”