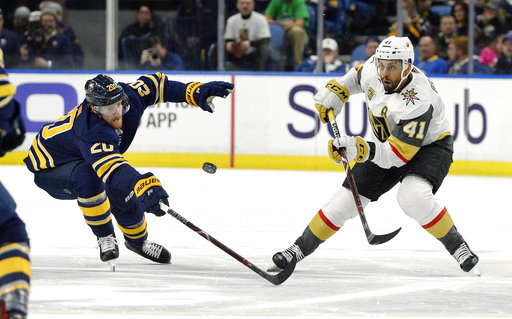 Let’s look on the bright side while taking a look at the Buffalo Sabres’ 2-1 shootout loss to the Vegas Golden Knights on Saturday afternoon.

It was the first-ever visit of the brand-new Golden Knights, who entered the league last fall with relatively low expectations. Since then, they have greatly exceeded all of them and then some. Vegas came into the game with a 10-point lead on San Jose in the Pacific Division, and has to be considered a reasonable contender to win the Stanley Cup later this year. How many times in any sport has that ever happened to an expansion team?

Yet the Sabres stayed right with them for 65 minutes, with the shots and play fairly even throughout the contest.

“Obviously, you look at their lineup and our lineup, and our guys did a terrific job,” Buffalo coach Phil Housley said. “Guys are stepping in. … But we had an opportunity to close that game out with four and a half minutes to go.”

BETTER UNDER THE SUN

The Sabres had played some of their worst hockey of the season in home Saturday matinees, with true stinkers coming against the Stars and Kings. The first two periods weren’t one-sided, but they weren’t going to be used as videos to demonstrate the excitement of the game to potential fans either. The two goalies, Marc-Andre Fleury of the Knights and Robin Lehner of the Sabres, cleaned up when the defenses in front of them had a rare letdown. In other words, if you missed the first 40 minutes, you didn’t miss much.

Luckily for the paying customers, the game picked up a few notches after the second intermission. Benoit Pouliot broke up a pass in the Sabres zone, rushed down the ice to claim the puck, and carried it into the Vegas zone on a two-on-one with Justin Bailey. Pouliot’s pass was perfect, and Bailey – just up from Rochester – made a nifty move to score the game’s first goal.

“I saw the play was going D to D. I went to the middle and tried to poke it,” Pouliot said. “I saw ‘Bails’ flying down the other side, and I wanted to get him the puck. It was a great play, a great goal.”

“It was a great play by Benny, who worked hard to get the puck,” said Bailey, who made a good-sized contribution to the team in return to the NHL.

For quite a while, it looked as if that would be the difference in the game. But then Deryk Engelland got free on the right side with less than five minutes to go. Lehner went out to challenge him, but Engelland skated around the net and banked one off the skate of Marco Scandella. It wasn’t pretty, but it counted just as much as Bailey’s goal.

“I tried to be aggressive and stay with him,” Lehner said. “Scandella was trying to help me out. It was a lucky bounce.”

The Knights had a power play right at the end of the third period but couldn’t score. Then the two teams combined for an exciting overtime that left both teams shaking their heads at times. Lehner made one save that stopped a premature celebration by the Vegas players. It was a solid day for the Buffalo netminder, a good follow-up to Thursday’s win in Ottawa.

“It’s no secret that I was struggling,” Lehner said. “I haven’t practiced too much lately. But I’m getting some confidence back, a little bit at a time.”

Shootouts can be a coin flip in terms of an outcome, and this one came up Vegas’ way eventually. Erik Haula got the winner to close things out in Round Five.

“We played a very good game against one of the best teams in the league right now,” Pouliot said. “It was a good all-around effort. We played much more of the game in their zone than our zone. We cycled the puck well, and we were on them. We kept it simple, and we had success with it. I think we played better than them, and I think we should have won the game.”

The Sabres have a few days to think about this one. Their next game is at home against Toronto on Thursday night.