Sabres join the ranks of winners 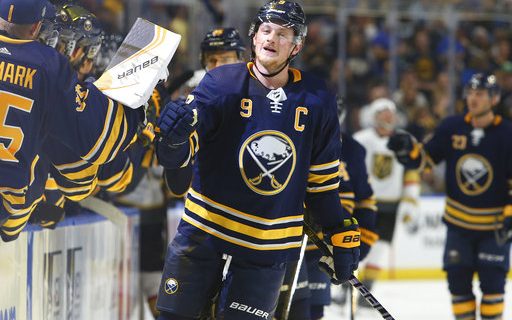 If you check out the current NHL standings, you’ll see that the Buffalo Sabres have more wins than losses.

Your eyes are not deceiving you. This is correct.

Buffalo earned its second win in three starts in the young season on Monday afternoon, a 4-2 decision over the Vegas Golden Knights before 16,004 at the KeyBank Center. The Sabres haven’t enjoyed the rare air of a winning record since January 2013 – around the time when Barack Obama was sworn in for his second term as President.

“That’s a credit to our guys,” said coach Phil Housley, talking about the winning record and not the results of the 2012 election. “They’ve put in a lot of work since training camp. There were a lot of things that we need to clean up, but we put the work in.”

“You can’t explain it, but it feels different in here,” defenseman Marco Scandella said. “Everyone’s excited. There’s lot of young guys here, and there’s a different energy. It feels great.”

The Sabres used the same formula for this game that they had in Saturday’s win against the Rangers. Have someone on the top line score two goals, and let the defense give up more shots than the opponents but fewer goals.

In this case, the goal-scorer was Jack Eichel, who was the dominant player of the contest. His first goal was a one-timer from the left side that was a blur, and the second came on a nifty goal as he skated down the slot alone.

“I think he made a commitment to do it every day,” teammate Kyle Okposo said about Eichel’s effort. “It’s not just when he’s under the bright lights. He does it in practice. If the best player on the team is the hardest worker, the rest of the team will follow.”

“He showed why he is an elite player in this league,” goalie Carter Hutton added. “His skating is great to watch. It’s so effortless.”

As long as Hutton’s name has come up, he provided quality goaltending for the second straight game. The Sabres only had seven shots on goal in the game’s final 40 minutes as they were on their way to finishing with 17. Vegas had 26 on their way to 37. Get outshot by 20, win by two – somebody is doing some good work back there.

“Obviously we found a way to beat a good hockey team,” Hutton said. “We got up early and found a way to hold them off in the third. We did our job. I thought our D did a great job of letting me see the puck and eliminating second chances. … We played great.”

Offensively, the Sabres also had contributions from unexpected sources. Scandella’s shot from the blue line hit a Vegas stick and floated through the air with the greatest of ease – not coming to a stop until it found the net. Jason Pominville added a score 88 seconds later to make it a 4-1 game before 30 minutes had elapsed. Pominville has been part of an effective “fourth line” with Evan Rodriguez and Zemgus Girgensons at times this season.

“Those guys have been some of most consistent players since they’ve been together,” Housley said. “They’ve been trustworthy, reliable. It’s great for them to be rewarded.”

After being on the wrong side of .500 for more than five years, no one is putting too much stock in winning two straight games in early October. Yet the Sabres certainly didn’t want to get off to an awful start that would have everyone in and out of the organization thinking, “Here we go again.” The last two wins have put good thoughts in the heads of the players.

“I don’t think we really over-emphasized (the start),” Hutton said. “We understood what we had coming in. We just took it day by day, shift by shift. We tried to become a team quickly. It all happens so fast. You start camp, and then you’re playing games. We’re trying to chip away, and I think we’re doing a great job at that. Our leaders are doing a great job, and the young people are stepping in.”

“I think we’re coming together as a group,” Eichel added. “We’re not a finished product. You can see the desperation we play with and the togetherness we’ve had the last few games. Three’s a still a lot of things we want to get better. We’ve competed the last few games. We’ve shot ourselves a couple of times in the foot with turnovers. We know we can clean up some things. But when you’re winning games and not playing your best, it’s a good sign.”

Buffalo finishes up the homestand Thursday night against Colorado.