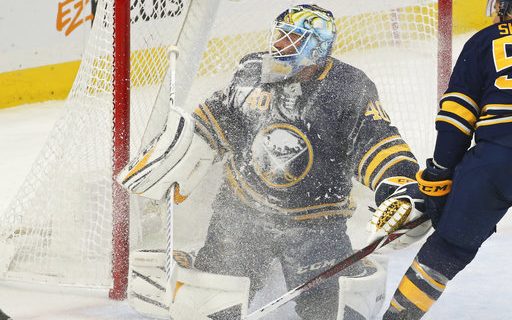 Some National Hockey League coaches like to break the long schedule into 10-game segments. That smaller area is supposed to help the players not think about the entire season all at once.

In that case, let’s take a look at where the Sabres are at the moment before breaking down Thursday’s 4-3 win over the Montreal Canadiens in the KeyBank Center.

Buffalo has won six of its first 10 games this season. Last year, the Sabres won their sixth game on Nov. 24 – and had already lost 17 games. That’s a lot of progress. They are 3-2 at home and 3-2 on the road, so there are points for consistency there. And while there have been a handful of games that you’d like to forget, there have been some that you’d like to remember too.

Thursday was one of those games to remember.

The Sabres came back from not one, not two but three deficits to knock off the Canadiens, a team that had only lost one game out of eight in regulation time previously in the young season.

“We faced a lot of adversity,” Buffalo coach Phil Housley said. “In the first period, we let a guy get in a good position to score, but I liked the way our guys responded all night. They kept working. We had some terrific zone time. They found a way.”

“It shows a lot about the character of this team,” Jason Pominville added.

Indeed, there was general agreement among the team that last year’s edition of the Sabres wouldn’t have been able to handle this much adversity and come out of it with a win. Such a victory is certainly a good sign for a team trying to bury all remains of 2016-17.

“Last year probably we would have gone in a shell, and we wouldn’t have the pushback or the fight-back,” Pominville said. “This year, it’s a different team. The vive in the room has been great even before training camp opened. The city has been buzzing. All of the new faces are nice. It’s nice to have a good start.”

It was an unusual game in some ways. The Canadiens rank as one of the biggest surprises of the young season, as they have tried to turn to speed. For the first half of the first period, Montreal sure looked fast. The Canadiens took a 1-0 lead, and it could have been worse. They just missed a couple of good chances, particularly on an early power play. A 2-0 lead might have changed the tone of the entire contest, but Buffalo kept the margin to one.

“Our penalty kill has struggled at times, but the willingness of all four guys to block shots has been a key component,” said Jake McCabe, who played an extremely strong game.

Slowly, Buffalo found its game as the first period went along. The Sabres outscored the Canadiens, 2-1, in the second period – both goals by Pominville – only to see Max Domi get his second of the game with 13:26 left in regulation time. Last year, that might have been fatal. On this night, it was a mere annoyance.

Conor Sheary’s cross-ice pass to McCabe found its target, and McCabe hit Sam Reinhart for an easy tap-in goal. It was Reinhart’s first of the season.

“I’m happy for Sammy; that was a big goal,” McCabe said. “He’s always in front of the net. He could have had five by now. The post hasn’t been his friend, but a guy like that can really take off.”i

Could see it coming

And by then it sure felt like the Sabres would figure out a way to get two points out of it. The Canadiens were hanging on, and then Joel Armia of Montreal took a penalty with 1:19 left in the period. Bad idea.

Only 18 seconds later, Kyle Okposo took a shot from the right point. Pominville was in the way of goalie Antti Niemi, proving the old hockey axiom that you can’t stop what you can’t see.  Bingo. Game over, more or less.

“I felt like I had the whole side of the net,” Okposo said. “You just have to keep going. You can’t get frustrated when you get behind. When you play the right way, sometimes you still may lose, but usually you get rewarded.”

When the final buzzer went off, the Buffalo backers in the crowd (there were a lot of Montreal jerseys in the building too) let loose with a rousing cheer. They got their money’s worth for this one, and there was another quality that returned to the building as well.

No argument. Now we’ll see if there’s more fun to be had in the next 10 games.