Sabres trade O’Reilly to the Blues 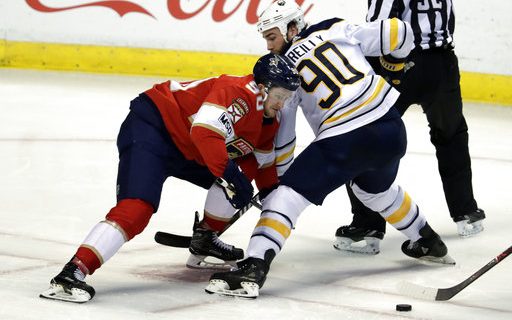 Ryan O'Reilly, right, has played his last game as a member of the Sabres for the time being. He was traded to the Blues on Sunday night. (AP Photo/Lynne Sladky)

Can a last-place team get better by trading its best overall player?

We are about to find out.

The Buffalo Sabres have traded Ryan O’Reilly to the St. Louis Blues on the first day of free agency in the NHL “year.”

In return, Buffalo will receive a first-round pick in 2019, a second-rounder in 2021, center Tage Thompson, center Patrik Berglund and center Vladimir Sobotka. Therefore, it’s a move that transforms the list of Sabres’ forwards – indeed, its roster – in a dramatic way.

“We felt we had to change the dynamic,” he said. “We liked the balance of this move.”

It’s a deal that might bring benefits to both sides. The Blues get a veteran two-way center that should improve their play up the middle next year. St. Louis finished with 94 points, and certainly upgraded its roster with the move. The Sabres hope that the draft choices and Thompson can develop into quality players down the road, while the two veterans also will compete for roles in the coming season.

O’Reilly spent three seasons as a Sabre after coming over from Colorado on June 26, 2015. He and Jamie McGinn came east for Nikita Zadorov, Mikhail Grigorenko, J.T. Compher and a second-round pick. O’Reilly, a Lady Byng Trophy winner with the Avalanche, has his best season as a Sabre statistically last season with 24 goals and 61 points.

O’Reilly also set an NHL record for faceoff victories in a year this past season with 1,274. That number was 248 more than any other player’s total. He was considered by many to be the best two-way player on the team.

The center, 27, made headlines at the end of last season when he said that the team’s losing ways in 2017-18 had robbed him of much of his enthusiasm for hockey.  O’Reilly received some criticism for that, but also earned points for honesty about the team situation from others.

“I won’t let you down. I can’t wait,” O’Reilly said to Blues general manager Doug Armstrong in a phone call Sunday night.

The trade opens up a spot at center for the Sabres behind Jack Eichel. Casey Mittlestadt, a first-round draft pick in 2017, is expected to be given every opportunity to win that job. Another option would be Sam Reinhart, who spent much of last season as a winger.

O’Reilly was scheduled to receive a $7.5 million bonus on July 1. His contract has a $7.5 million hit on the salary cap for 2018-19. St. Louis now is responsible for that bonus payment and for his salary. If the transaction had not been completed before midnight on Sunday, Botterill said that the asking price for O’Reilly would have been different. This deal may free up the Sabres the financial room to pursue more or better players in the free agent pool later this month, although they did have some space under the cap even before this transaction.

There is a contingency to the arrival of the Blues’ top pick next year, in that St. Louis would delay sending the choice to Buffalo if it is in the top 10. Similarly, San Jose’s first-round pick next year, scheduled to come to Buffalo in the Evander Kane deal, also would be delayed in its arrival if the Sharks miss the playoffs. Buffalo has its own choice, so it has the potential to have three picks in the first round in 2019.

The 6-foot-5 Thompson was a first-round pick of the Blues in 2016. He had nine points in 41 games for St. Louis last season, and also spent 30 games with San Antonio of the AHL.

Sobotka, 31, first played in the NHL for Boston in 2007-08. Last season he had 31 points for the Blues, as he returned to that franchise on a full-time basis after three seasons in Europe.

The move capped a busy day for the Sabres. Earlier Buffalo signed free agent goalie Carter Hutton to a reported three-year deal. Brandon Hickey, a Boston University product, also agreed to an entry-level contract with the team after participating in the team’s development camp this past week.