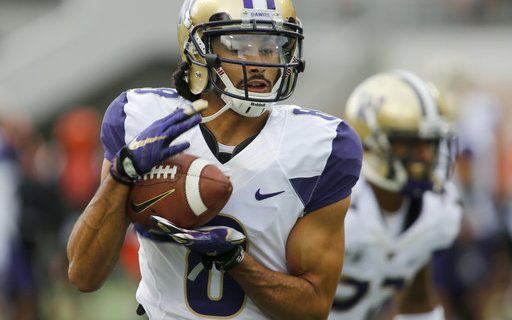 As I wrote earlier this week, the Buffalo Bills could possibly decide to draft a wide receiver with one of their premium round (1st and 2nd) picks. Anthony Miller from Memphis would be a player who could be available when the Bills chose in the second round, while Dante Pettis of Washington would have to be selected with one of their two first round selections. Obviously with wide receiver being a stopwatch-driven position, how these players run at the Combine, will determine their final grades.

Strong Points –Two year starter who has been very productive the last two seasons with 187 total catches. Fast and athletic with very good quick feet and body control. Very good initial quickness. Can defeat jam and get open versus man and zone. Very good hands, can make tough catches and tracks the ball well. Excellent runner after the catch. Showed how tough he was in AAC Championship game playing despite being hurt and coming up with a number of big plays. Has done both kickoff and punt returns in the past.

Weak Points –Just average size for an NFL wide out. Arm length is average. Runs only about four different routes in Memphis offense. Arms seem to be a bit short. Has to improve his blocking.

Summation-A productive fifth year senior. Redshirted in 2013 and missed all of 2014 with an injury. Has been a starter the last two seasons. Very productive in the Memphis offense. Often used on bubble screens and is excellent after the catch. In the Memphis offense he doesn’t have to run very many type routes and has to be considered a raw route runner. Will need some time to develop but has the traits to be an eventual starter as a slot receiver. His quickness and speed will really help get open versus NFL defensive backs. Has some return history and could be a good NFL returner while he develops. Solid mid-round pick. Value could jump because of Combine and pro day workouts.

Strong Points –Been a starter since midway through his freshman year. Smooth with very good overall athleticism. Excellent punt returner. Has a good release off the line of scrimmage, can work by press and get open versus press or zone. Quick in and out of cuts and is able to get separation. Good hands, adjusts to the ball and shows an extended receiving radius. Quick to tuck ball away and get up field after the catch. Good to real good runner with instincts and elusiveness

Weak Points –Lean frame, needs to add some strength and bulk. Willing blocker but not consistently effective. Will have some concentration drops. Needs to be a bit more competitive in traffic.

Summation-Has been a very consistent four year player for Washington. Became the go-to guy in 2017 and touchdown production fell off some. Had receiving 15 TD’s in ’16 and 7 in ’17. He’s a smooth athlete with a good release off the line of scrimmage. Can uncover vs man and zone and is able to get separation. Effective both short and deep and is a reliable runner after the catch. His punt return ability is an added plus as he had 9 return TD’s at Washington. Still needs some development. Will be the starting punt returner and a role player to start out but could be a starter by midway through his rookie year. Has upside.