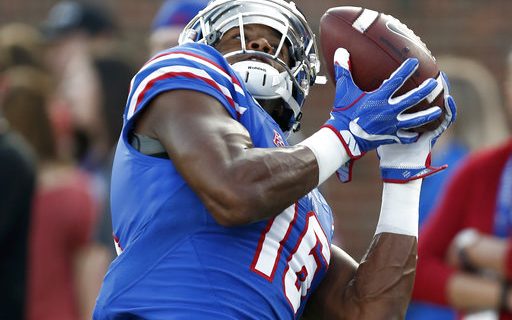 Depending on what happens in free agency, the Buffalo Bills could be looking for a wide receiver with one of their two first round picks. The best receiver in the class, Calvin Ridley, will probably get drafted somewhere in the teens. If that happens there will be a number of wide receivers in which the Bills could choose from. Two of those are SMU’s Courtland Sutton and Oklahoma State’s James Washington.

Strong Points –
Three year starter. Very productive. Great size and length. Very good athlete, smooth with speed and a burst. Excellent hands and ability to adjust to the ball. Very large receiving radius and can snatch the ball. Competes for the ball in traffic. Quick in and out of cuts and is able to get separation. Productive both short and long. Strong runner after the catch with strength and some elusiveness. Willing blocker.

Weak Points –
Not a burner. Has a limited route tree in the SMU offense. Did not play versus the toughest of competition. Semi strider who doesn’t always look as fast as he is.

Summation –
A fourth year junior who is entering the Draft. Got a medical redshirt after playing just two games as a true freshman. Has been a three-year starter and very productive ever since. Sutton is tall and long with speed and very good overall athleticism. He is smooth and can get in and out of cuts very quickly to gain separation. Shows toughness and courage and competes for the ball in traffic. With his height and length he has a huge receiving radius and adjusts to the ball very well. Has big hands and can snatch the ball. Consistently gets yards after the catch and has the ability to turn a short reception into a long gain. Effective both short and deep. Is similar to Alshon Jeffery and may be a little bigger and faster. Will be one of the first receivers drafted.

Strong Points –Fourth year senior who has been a starter since midway through his freshman year. Very productive with 74 receptions for 1549 yards and 13 touchdowns on the season. Has averaged over 20 yards per catch over the last three seasons. Has excellent hands to go along with a very large receiving radius. Adjusts very well to the ball in the air. Excellent runner after the catch. Consistently gets separation on any type route. Willing blocker. Very good athlete with real good speed and a burst. Has very good overall body control and quick feet. Will compete in traffic and come up with the catch.

Weak Points –
Has a limited route tree and mainly runs only three to four different type routes. Built more like a running back than a wide receiver. Plays mostly on the right side of the formation (do see some left side alignments but not many) While he is fast he isn’t “that” fast.

Summation –
Four year starter. Has similar size and athleticism to Sammy Watkins (Rams). Very productive player in a limited spread offense where he doesn’t run the route tree that some schools have. Has speed and a burst and is a legitimate deep threat. Has a burst to go after the deep ball. Always catches the ball in his hands and can adjust to make the difficult catch. After the catch he has top run instincts and very good power for a wide receiver. Consistently gets yards after the catch. Can be a physical player and he will block. Going to need some development time because of the offense he played in but should be a starter sometime in his rookie year. One of the better receivers in this class.