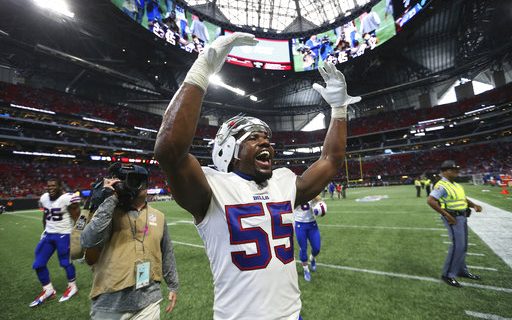 Could Jerry Hughes be a salary cap casulty of the Buffalo Bills this offseason? (AP Photo/John Bazemore)

The Buffalo Bills have some key question marks about their salary cap heading into the start of the 2018 NFL season.  Mike Ginnitti of Spotrac.com takes a look at the team’s biggest decisions, and how those will effect the cap if the players retire, are traded, or are released in the coming weeks.

The 28-year-old former 2nd round pick out of Georgia has All-Pro potential when healthy, but staying on the field has been a problem in recent years. His cap number jumps to $14.45M in 2018, which ranks 2nd on the Bills (for now), & 3rd among active NFL left tackles. His $11.25M cash to be made in 2018 ranks 6th among signed left tackles.

Taylor has been a fairly productive, efficient QB for the Bills across 3 seasons, but with draft assets in hand and free agent options available, his tenure in Buffalo appears to be closing. His $18.08M cap figure in 20108 ranks 1st on the Bills, and 16th among signed QBs.

After 19.5 sacks in 2 seasons under Jim Schwartz’s defense, Hughes just hasn’t found the same pass-rush production since. He’s still posting strong tackle/run-stop numbers, but the 29-year-old may not be the best fit for the current Bills’ system. His $10.4M cap figure in 2018 ranks 3rd on the Bills, and 11th among signed DEs.

Incognito has played every game since joining the Bills in 2015, while making the Pro Bowl each season as well. He’s still a very capable lineman even at 34-years old, but his cap number jumps to $7.575M in 2018. While this isn’t outrageous by any stretch, it may be too rich for Buffalo given their current standing. He’s a borderline cut candidates at this point.

An unfortunate neck injury has ended Wood’s 9-year football career. It appears the Bills will wait until after June 1st to place him on the Retired/Reserve list for cap purposes, while Buffalo also reportedly seeks to recoup some of his signing bonus. Wood’s $4.8M salary for 2018 was guaranteed for injury. Should he not be able to pass a physical when the March 14th league year begins, the Bills will be on the hook for this payment (the salary fully guarantees on March 18th anyway).