Sylvester: I Agree With McDermott 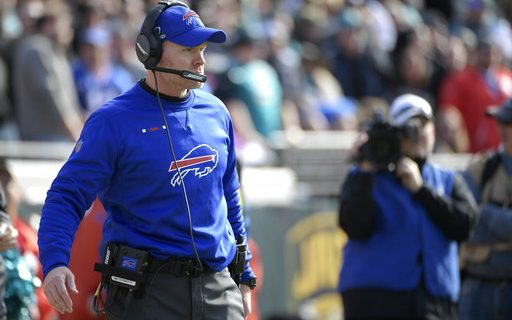 I hate coach speak. It’s full of cliche’s and non-answers. But there is one comment Bills Coach Sean McDermott repeated in his press conference following the 10-3 defeat the the Jaguars in the AFC Wild Card game. “There are no moral victories” the defeated coach uttered when asked if his team had accomplished everything they could. The question was appropriate for  a team that wasn’t expected to be in the playoffs. It suggested that the group of players reached maximum potential. The answer given, straight from the the coaching handbook, was exactly what I wanted to hear.

Happy To Be There

Bills fans all over the world were thrilled to have the 17 season playoff drought over with. Nobody expected it, even up to the final moments of the 2017 NFL season. The New Years Eve Excorcism is something this town will never forget. It was a galvanizing moment for fans that lived the glory days, and the new generation of tweeters and table terrorizers. The thrill of being in the playoffs was enough.

For the Bills, it was enough and it wasn’t. The team certainly reveled in the buzz this town gave them for reaching the postseason. After the hangover wore off, it was back to business finding a way to beat the Jaguars. Winning became the focus.

Sean McDermott had the motivational phrases changed immediately in the Bills locker room and training areas from Playoff Caliber to Championship Caliber. A new mantra and goal for a team that defied the odds. Getting the team to believe they could win was just as important as putting the game plan in. After all, this was new territory for many of the players.

For others, including McDermott, it wasn’t. The Bills coach experienced playoff runs with the Eagles and Panthers. He knows what it takes to make it to a Super Bowl. It was a week to lead, and show his team what was possible.

The game didn’t go the Bills way. It could have, easily could have. They only lost 10-3, playing a great defensive game, and a somewhat expected offensive game. I didn’t expect the Bills to score much, but I did expect more than 3.

McDermott could have done things differently, especially on 1st and goal at the 2. The world was expected run, but a failed pass attempt resulted in a pass interference call on Kelvin Benjamin. A crucial 10 yards was lost on the penalty, and the Bills settled for their only score of the game, a field goal. McDermott indicated after the game that there were some play calls he’d like to have over. Obviously running on first down from the 2 makes sense, but I always remember Marv Levy sarcastically saying “If a play call didn’t work, you should have done the other thing”. A better throw, perhaps, results in a TD. We’ll never know. I bet McDermott and Offensive Coordinator Rick Dennison will contemplated that series for awhile.

Other close calls could have worked out for the Bills too. If Charles Clay stays in bounds before catching a first down, the drive stays alive, and maybe Tyrod Taylor doesn’t get knocked out, and …….it’s pointless to continue. Those things didn’t happen, and the Bills didn’t win.

Back to Moral Victories

I like that McDermott stated there are no moral victories. He’s in it to win it. If you’re happy to be there, then you’re in the wrong the place. Competitors want to win, and McDermott and his team were there to win. That needs to be the standard. Winning. This game will sting for awhile, and it should.  It was very winnable, and the margin was closer than the 7 points. Fans can feel good about that, but I think it’s good sign McDermott does not.