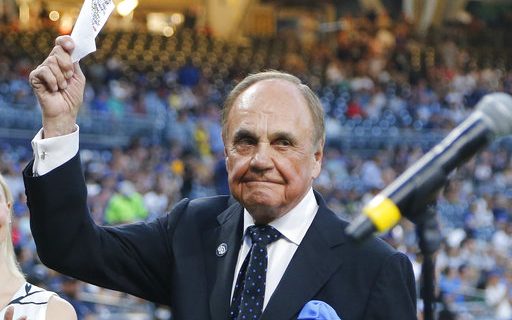 FILE - In this Sept. 29, 2016, file photo, San Diego Padres broadcaster Dick Enberg waves to crowd at a retirement ceremony prior to the Padres' final home baseball game of the season, against the Los Angeles Dodgers in San Diego. Enberg, the sportscaster who got his big break with UCLA basketball and went on to call Super Bowls, Olympics, Final Fours and Angels and Padres baseball games, died Thursday, Dec. 21, 2017. He was 82. Engberg's daughter, Nicole, confirmed the death to The Associated Press. She said the family became concerned when he didn't arrive on his flight to Boston on Thursday, and that he was found dead at his home in La Jolla, a San Diego neighborhood. (AP Photo/Lenny Ignelzi, File)

–World Jr Buzz. I am not surprised that attendance is low for the initial games of the World Jr U20 Tournament. All of the buzz, and there wasn’t much to begin with, was about the outdoor game featuring USA vs Canada this Friday.  I was very involved that first time Buffalo hosted the tournament, and many of the same folks are organizing again, so they know what they’re doing. The outdoor game was a nice touch, but the date is a miss. Canada and the U.S.A. would traditionally play on New Year’s Eve, but this is 2 days earlier. I understand not wanting to compete with the NFL, and finding a TV window that works, but tradition is tradition. Now, that all makes for a nice narrative, but price is the real issue.

Consumers on both sides of the border have price and package fatigue, and more importantly, have become accustomed to heavily discounted hockey tickets on the secondary market. The Sabres losing is not helping the World Jr. Box Office. I also believe the Winter Classic could be affecting the outdoor game in Buffalo. The Sabres “home” game at Citi field for the Winter Classic is a better draw for Buffalo fans. NYC is not that far of a drive, the Winter Classic jerseys are sweet, and the appeal of that event is greater than the game here. Timing is everything. Even with Sabres draft pick Casey Mittelstadt on the Team USA roster, $50 per 300 level seat (as of Wednesday on Stub Hub) is a lot to ask.

With all of that hindsight being said, I believe it will be a fine event and create great memories for players and fans alike.

–Bills and the Playoffs. I do not believe the Bills will make the playoffs. Too many things have to go their way for it to happen. But I think Sean McDermott (punts and all) deserves a lot of credit for having the team in position to make the postseason in his first year on the sidelines. He has no stars on defense, and only one on offense, but has gotten the most out of the roster. That is what good coaches do, get the most the out of their players. I look forward to seeing what he does in a few years with a more talented roster.

–College Bowl Season. I have not watched a bowl game yet, and probably won’t until the playoffs start. Don’t blame me, blame the money in college football. I was happy with most, if not all, of the bowl games being played on New Years’ Day.

–Dick Enberg. I think most of us knew Dick Enberg was great, but didn’t realize just how great he was until he passed away.  He struck the right tone every time in every sport. He was that good. But what made him great was his ability to bring the best out of his analysts, making them shine. Al Maguire and Bud Collins were allowed to do what they did, because Enberg was in control, and not worried about being overshadowed.