It Takes Two to Make a Line 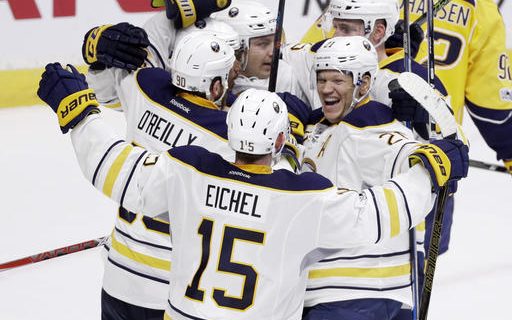 It Takes Two to Make a Line

Twitter is a great place to go for knee-jerk (interesting word) reactions to any and all news in the sports world. Throw your opinion out there and be prepared to be told you’re a moron or have your family lineage insulted. That may be an exaggeration because you’re more likely to be Gifed (It think I just made up a word). All of the above seem to happen daily with the tweeting of Sabres line combinations from practice.

I found some of the reactions to old pal, Joe Yerdon’s practice tweet interesting.

Some folks I follow started commenting on Jason Pominville not belonging on the top line. Gifs ensued. What joy. I chimed in that Eichel and Kane matter. Those two are the driving force on the first line, the same with Ryan O’Reilly and Kyle Okposo on the second line. The other winger doesn’t matter as much as you’d think.

The days of keeping three guys together on a line have gone the way of the rotary phone. Ask your parents what a rotary phone is after they finishing telling you who The French Connection was. The most recent memorable lines that garnered nicknames were the Merlot Line of the Boston Bruins named after the color of the practice jersey Greg Campbell, Dan Paille, and Shawn Thornton wore; and That 70’s line of the L.A. Kings derived from players Tyler Toffoli, Jeff Carter, and Tanner Pearson all have sweater numbers in the 70’s.  Cool, original, and circumstantial.

In the early days of advanced stats, hockey departments focused on finding two players that click together on a line. How do I know this? I asked a pro scout about line combinations and why they change so frequently. Why didn’t they keep 3 guys together for consistency sake? The answer was interesting. The scout told me the growing trend was to find the two players that play well together consistently, and that the third player didn’t matter as much as you think. Don’t mistake matter as much for doesn’t matter at all. That player has to go along for the ride, keep up, and perform. If he sticks, great.

Sticking with the Sabres, here are some examples of players that worked together and the scout indicated played best together in the modern era.

I stuck with playoff versions of the Sabres, and it’s been awhile since we can say that. Maybe this year is different.

Top line: Clearly Jack Eichel and Evander Kane are the combination to keep together here. They have speed and can snipe it as the kids say. Jason Pominville is the right guy to put with these two. He knows how to finish, is a smart player, responsible, and has been in every situation.

Second line: Ryan O’Reilly and Kyle Okposo are the duo here. During most of the pre-season, Zemgus Girgensons was the left winger, but the line today had Benoit Pouliot riding there. Pouliot has always been a slick skater and capable of scoring in the mid to high teens in goals. No issues with him on the left side on this line or the third line.

Third line: The combination here is unknown. Pouliot resided here with Sam Reinhart, but now Girgensons is taking his turn. I think Reinhart and Z can become a thing, or maybe Seth Griffith is the guy. I actually thought Evan Rodrigues had the opportunity until being blasted vs Toronto in the preseason. This line is one to keep and eye on, and my guess for the many changes in the early going.

Fourth line: At the moment I’m going to peg Jacob Josefson and Jordan Nolan with the best chance to the gel. Matt Moulson doesn’t belong here, but hasn’t proven to be good enough to play higher. Johan Larsson is a player that needs to embrace being in the lineup wherever that is.

The good news is Phil Housley has plenty of players that can move up and down his lineup as necessary. The bad news, at this time anyway, we may be a year away from getting clever with a nickname.