Football nostalgia was on the mind of a crowd that recently gathered at the Buffalo History Museum.

The main hall of the Buffalo History Museum – which dates back more than a century – had never seen anything like it.

Display cases this July night were scattered around the room, filled with shirts, ticket stubs, statistics, and other goodies. The viewers filled in the gaps in the room, talking about old times with some old friends.

The odd part was the subject: The Arena Football League. To be more specific, the common denominator was a reunion of those with an interest in the Buffalo Destroyers, the local team that was a part of the AFL (not to be confused with the Bills and the AFL of the 1960s) from 1999 to 2003. The franchise was granted in 1998, so this year marks the 20th anniversary of that event.

The gathering of people was the idea of Gary Cobb, who is almost single-handedly keeping the flame of Buffalo’s indoor football team alive. Maybe that’s not too surprising, since as George Bozeka of the Pro Football Researchers Association said, “Every team has that guy (who collects as much as he can).”

“I met Greg Tranter (president of the Museum’s executive committee) and he said, ‘How about we have a night in the museum (for the team)?’” Cobb said. “I said, fine. That idea changed into it to a reunion. I contacted some players and other people.”

The crowd mostly consisted of front office staffers along with their friends and relatives. A couple of Bombshells – the Destroyers’ memorably named dance/cheer group – were present as well. The center of attention, though, was David White. He mostly is remembered as a member of the Buffalo Bills (1995-96), but he was also an original Destroyer.

“I was coming off an injury,” the ex-NFL linebacker said. “I was looking at life after football to be honest. I was still doing workouts and staying in shape. … Then Dave Whinham (the team’s head coach) called. He said, ‘We are forming a new arena team.’ I said, ‘Is that the one where there’s eight guys to a side?’”

Indeed it was – the equivalent of playing football inside of a pinball machine. The owner of the franchise was Mark Hamister, and the team hired White to spend the next several months helping market the team from Erie to Syracuse – and then suit up when 2009 arrived. White was part of a solid marketing effort that increased awareness of the game throughout the region.

“It was very interesting – that would sum it up,” White said. “There were guys from around here like Sean Doctor. Tony Jones showed me the game. Wayne Williams helped me. Carlton Haselrig was a beast as a guard for Pittsburgh. There were some guys who had Arena League experience. We all came together and formed a team.”

Opening night was April 30, 1999 at the First Niagara Center, and 13,214 turned out to see what all the fuss was about. Buffalo and New England were tied at 7-7 after a quarter, and then the proverbial roof fell in. The SeaWolves went on a 24-0 run to take a 31-7 lead at the half. On the last play of the half, one of the Destroyers was injured and had to be carried off the field.  It ended 59-26.

It didn’t get much better after that. The games were all high-scoring by football standards, but the Destroyers kept losing – 12 straight times. As the saying goes, you don’t usually get a second chance to make a first impression.

“Any sport’s team – if you start out terrible, it will hurt marketing,” Cobb said. “If you get into pro sports, you know you’re going to take some losses sometimes.”

The losing streak finally came to an end on July 23. The Destroyers hung on for a 30-23 win over Portland. In White’s words, Buffalo was no longer “0-and-forever.”

“It was if we won a championship,” he said about the postgame celebration. “There was champagne, guys popping bottles. It was a big deal.”

TOUGH ON THE LEGS

The team finished 1-13, and White had learned a lot of lessons about life as an Arena Football League player. For starters, he took a pounding.

“We were playing football on a hockey rink,” said White, who played college football at Nebraska. “Many times at home, we played right before a Sabres game. Often they just rolled the turf on the ice.”

What’s more, he had to play both ways – offense and defense. That took some adjustments.

“Defense was defense – rushing the passer. They didn’t run the ball that much,” White said. “Playoff offense was tougher. I had played tight end in high school, and I did my share of blocking, but not to this extent. They wanted to bring me along slowly, but I told Coach Dave to put me in the game. I’m a quick study, and the rest is history. I even scored a couple of touchdowns to win that first game. I caught on quick.

“Marv Levy used to tell us to act like we’d been there before when we scored, but I hadn’t been there much – only once with the Bills on a fumble recovery.”

White finished that season as the team’s second-leading rusher, with 91 yards on 31 carries and three touchdowns. Tony Kimbrough and Kevin Mason split the quarterback chores, and Darrick Branch – called by Cobb the greatest Destroyer in history – and Bobby Olive were the top receivers with 74 and 55 catches respectively. The kicker was Bjorn Nittimo, who played for the Destroyers two years after suffering a severe concussion in 1997. He was memorably profiled by then Buffalo News writer Tim Graham in 2016. 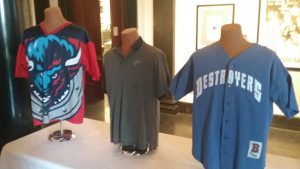 There were plenty of choices when it came for shirts for Destroyers’ fans.

Year Two wasn’t much better, at least at the start. Buffalo dropped its first eight games of 2000, and the home attendance crashed to a low of 4,203 on May 26. One of the only silver linings to come from a 1-21 start was that the team stayed together.

“It was a learning experience,” White said. “There was a lot of fun. We grew. That comes with a losing season. One of two things will happen. Either we will circle the wagons like Chris Berman says, or we are torn apart. We circled the wagons.”

What’s more, there were no horror stories about bouncing paychecks and terrible facilities.

“When you hear the stories of the veteran guys of the things that happened to them, that was refreshing,” White said. “One thing they emphasized here was that this was going to be a world-class organization short of the NFL. That’s the way they did it. We had a great practice facility in Amherst. They put us up in apartments. Mark Hamister would have us out to his house for dinners and functions. They took pride in making the Destroyers one of the envied teams in the league. Guys wanted to come to Buffalo because of how well they were treated here.”

Ex-Bill Ray Bentley took over the coaching duties from Whinham in midseason, and suddenly the Destroyers found their way. They went on a five-game winning streak that got them into the playoffs. There they lost a 41-34 decision in Arizona, but the 5-9 record was at least progress.

White finished 2000 as the team’s leading rusher with 132 yards on 10 touchdowns, then he was off to play with a couple of other teams. White even won a championship with Tampa Bay later in his career. 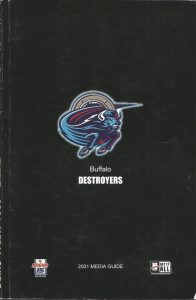 Good luck finding the details of the Destroyers’ final regular-season game in this 2001 media guide.

As for the Destroyers, they won their first game in 2001, but lost eight of the next 13 and missed the postseason. Buffalo qualified for the playoffs at 6-8 in 2002 despite losing its last four games, and dropped a close one to Orlando. Finally in 2003, the Destroyers got off to a 3-1 start and finished 5-11 and done for the year.

And, as it turned out, they were done forever. Hamister – who had made an unsuccessful bid to buy the Sabres in 2002 – gave up on the Destroyers’ chances of surviving in Buffalo after that season for financial reasons. The team moved to Columbus, where it lasted five more years.  The all-time record here was 23-51, including 0-2 in the playoffs. The average attendance was 8,376.

Shortly after that, oddly enough, Cobb becomes part of the story. He had gone to a few games and liked it. Cobb attended the big farewell to Memorial Auditorium in 2009, and saw other devoted collectors display their memorabilia. He decided to concentrate on one team: the Buffalo Destroyers.

“I made a few contacts,” Cobb said. “I went to flea markets. I went to people’s houses after I put an ad in the paper. I wanted to keep it alive. I knew it was exciting from watching it on TV, and I even called the league each week to get the scores, because no one was covering it.

“One time I contacted the team in Ohio and said I had a Destroyers’ museum. A guy said, ‘We’ve got some stuff and we’ll send it to you. Just pay the postage.’ When the team folded, I got some Buffalo stuff at cost.”

His collection includes the statistics from a Buffalo-San Jose game in 2000, which has a curious spot in the team’s sports history. It was an 83-54 loss that ended the season; somehow, any mention of that game was omitted from the Destroyers’ 2001 media guide. Oops.

Here we are, then, 20 years after the news that indoor football was coming to Buffalo. The league itself has contracted over the years to the point where there are only four teams left in Arena Football – all huddled in the Northeast.

But for some – at least if you are 25 or older – memories of the Destroyers persist. Cobb does his part with a website, buffalodestroyersmuseum.com, which contains mostly photos, and a Facebook page.  He hopes the idea of reunions catches on down the road.

“It’s fun to see people reacting to history,” Cobb said. “People say, I remember this, I remember that. And they see stuff they didn’t know existed. It’s tough that some people couldn’t make it, but it’s fun to see the reactions of people who are here.”

White added, “You can’t teach passion. You look at Gary and you see Buffalo. We’re all historians in our own right. He decided to do it. Being part of the first team means a lot to me. Maybe the next four or five years we’ll get more guys here and celebrate. It’s a big deal. It’s a piece of Buffalo’s sports history. I appreciate the things Gary does to keep the Destroyers alive.

“A guy said the arena game was a party in which a football game broke out. … We had a great time.”