The Doctors Will See You Now 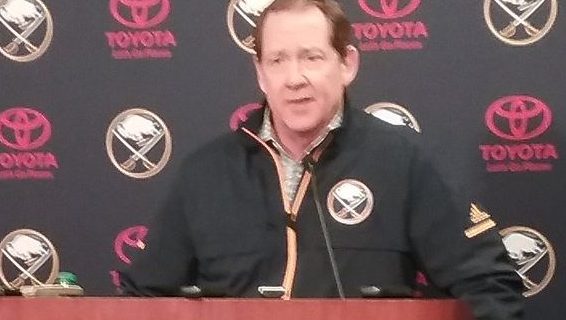 Monday’s locker clean-out day for the Buffalo Sabres at the KeyBank Center had little to do with equipment at times and more to do with therapy sessions.

Yes, sticks and skates were getting packed away for the summer. But much more interesting was the way that the players were unburdening themselves about what a terrible season it was for them. You may have heard that the Sabres sunk by 20 points from the previous season to finish last overall in the NHL standings.

At times, it was easy to wonder if someone was going to roll a psychologist’s couch into the middle of the locker room, and see if a member of the media asked a player why he hated his mother.

The most noteworthy patient was Ryan O’Reilly, who offered an eye-opening portrait of the attitudes of himself and his team. He warmed up when he was asked how everything went so wrong.

“I don’t know what the answer is,” he said. “Myself, I don’t think I was mentally tough enough this year. I was affected by too many losses. It’s something I have to focus on.”

Ryan, were other players thinking the same way?

“Our mindset was being OK with losing,” O’Reilly answered. “It really crept into to everyone during the course of the year. I lost myself a lot. We were kind of just trying to get through the game, being OK and not making a mistake. That’s not hockey at all. It’s crept into all of our games. It was definitely disappointing throughout the year.

“I lost the love of the game multiple times. I need to get back to it. It’s eaten me up with it, and the other guys too.”

A CHORUS OF AGREEMENT

“I’ve only been around here for a couple of years, but it’s got to stop – that mindset,” he said. “I just think it’s been bad here for too long. If there is a little bit of ‘We’re going to go into the game and just play and see what results we get,’ well, that’s not the mindset for hockey. You have to go into hockey games thinking you’re going to win every single game. If you lose, you look at what you did wrong, fix it, and move on to the next one. We’re a long way from that.”

Jack Eichel was also willing to speak at length about the team’s problems in the session, a contrast to last season’s clean-out day when he acted as if he wanted to be anywhere but the KeyBank Center. Eichel sounded like the next captain of the team throughout his interview, including when he said the losing attitude started early in the season with a poor start.

“We were never able to get ourselves out of a hole,” he said. “We’d play a few games, feel good about ourselves. Then there would be a lapse of a few games. Then you’re back questioning yourself. When you look at the year we had, and some of the wins we had against good hockey teams whether it was on the road or coming from behind, there were some good moments. But consistently, maybe when we weren’t playing the best team, we didn’t come ready to play. That’s on us. That’s something that needs to change. That’s what the best teams do every night. I think we bring it against the best teams because we know we need to. Maybe we’re not as focused or engaged in the game for other teams.”

After listening to those voices, it’s not a matter of figuring out why the Sabres lost so often. It’s a matter of how they managed to get out of bed to go to the rink for games.

The Sabres haven’t made the playoffs since 2011, and they haven’t won a playoff series since 2007. More to the point, they have averaged 65.4 points per game over the last five years, an era that has included three last-place finishes in the overall standings. It’s almost as if the Hockey Gods looked down upon the Sabres’ management after the Tank Years and said, “As your punishment, you will wander around the NHL’s desert aimlessly for years to come.”

“I never expected this,” coach Phil Housley said about the 2017-18 campaign. “It was a difficult season in that respect. I’m not used to having the results that we had.”

Business executives love to throw the words “culture” and “process” around these days, perhaps because they all buy the same motivational books in airport newsstands. Even so, it’s easy to conclude that the previous approach to rebuilding the team has collapsed, and that it has left an attitude infection that will be hard to scrub away. It’s time for a new culture and a new process.

“Overall, our mindset has to change,” Jason Pominville said. “It became noticeable when you lose so much over the course of three, four years that some of the guys have become accustomed to that. It’s unfortunate, but it can’t be acceptable. I know no one wants to lose, but you can’t let it become acceptable without every realizing it. You can ask guys who have been on winning teams – it has to change.”

Going forward, many of the most important players in the Sabres’ future weren’t even around to talk. Eight of them were assigned to Rochester on Sunday, representing reinforcements to an Americans’ team that hopes to win a championship in the American Hockey League. When players like Linus Ullmark, Alexander Nylander, Casey Nelson and Brendan Guhle see their Sabre teammates again as a group in the fall, they’ll see people like Eichel and Casey Mittelstadt – perhaps the two biggest pieces of the Sabres’ future. They all hopefully will see a few new veterans who still remember how to win and can lead the way toward better times in the future.

But those young players won’t see some others who will be elsewhere next season. At least a half-dozen people will be gone from the roster by training camp, and perhaps even more. It comes with the territory, and Eichel knows it.