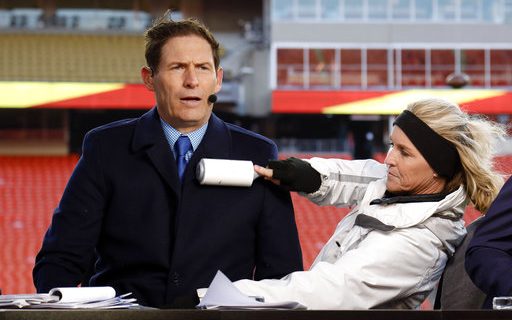 ESPN's Monday Night Football presenter Steve Young gets his coat touched up on the set at Arrowhead Stadium before an NFL football game between the Kansas City Chiefs and the Denver Broncos, in Kansas City, Mo., Monday, Oct. 30, 2017. (AP Photo/Colin E. Braley)

Editor’s Note: Mike Waggoner is a WNY native who has worked at ESPN & NFL Network during his long career as a sports producer.  He has worked with some of the biggest names in TV sports.  Periodically, Mike will talk about some of the people, places and personalities he has worked with.

During my career, two guys I was very fortunate to work with as their solo producers were Hall of Famer’s Steve Young and Michael Irvin.  They not only were successful players, but I feel two of TV’s most insightful NFL analysts today, with two completely different styles. Irvin I will get into at a later time, but my experiences working with Steve were classic.

I still remember living in Los Angeles and getting a call from Bristol, finding out that working with Steve was going to be part of my weekly fall assignment during ESPN’s inaugural Monday Night Football season. (Note: I will not be writing dates or years so that I can preserve my youth somewhat throughout these chronicles. Up to you if you want to Google when that was.)  Fresh off the cancellation of ESPN Hollywood — another endeavor to be detailed at a future date — I was asked to be Steve’s producer. I hadn’t yet worked with “talent” of that magnitude… FYI “talent” is what we say in TV as another word for someone on camera.

So that season Steve had responsibilities at the “mothership” (as Dan Patrick says) in Bristol for NFL Sunday Countdown. Because he wasn’t a fan of traveling every week from the West Coast, they decided that having a taped segment in the show each week would suffice. It was called “Steve Young is Restless,” the title quite an incredible creative spin on the soap opera. The day before our first shoot, I was very nervous, but it went fine as most of our shoots did thanks to an incredible crew.

Time Was Not On His Side

Working with Steve was a blast. We got along perfectly. He is a brilliant guy, and a blast to talk with. He treated me fantastically. However, they warned me in Bristol about how unpredictable he was. Predictably unpredictable. Notoriously late. It’s funny how you hear about these football players not being allowed to be late to meetings, “Tom Coughlin” time… “If you’re 5 minutes early, you’re late.” or something like that. I don’t want to bury the guy, but he was late all the time. It’s as if he had all of this tardiness built up inside through all of those playing years. Because this was a taped segment, it wasn’t really a big deal. The crew was paid handsomly regardless, and we’d joke on our watches making predictions of when he’d show up. Once Steve and I were texting each other before our scheduled start time… typical “Where are you?” “You close?” stuff from me, and him “10 mins, 20 mins, 5 mins” until I finally responded. “You’re embarrassing.” He loved that. After a number of these instances, I affectionately referred to him as “His Restlessness”.

Another time, he forgot his tie for the shoot. It was a big “no-no” to have him tie less in his segment. We did our segments at Stanford University where they had their own studio on campus. I went to a nearby building, asked a random guy working there if I could borrow his tie for an hour or so. An odd request that I doubt he was expecting. When I explained why, he took it off and tossed it to me. His secretary interfered and said, if he does this Steve would have to return it himself. I said sure, and Steve did, then signed some autographs and did a photo opp with the staff there.

Perhaps my favorite Steve story was a time when we had to do our segment in Miami that day of the MNF game to air the following week, because the Dolphins were hosting MNF. I think it was Christmas Eve which made it an unusual week. So Steve and the Young family all were on their way to Florida for their holiday vacation. Steve called me the night before and said he forgot to pack a dress shirt, and asked if he could just do it in a golf shirt. As I mentioned earlier, wardrobe choice was not a flexible situation. So I was in North Carolina at my parents’ house, and because my father luckily worked in Chapel Hill at a men’s store, we were able to get a shirt for him, iron it out of the bag, and I was able it with me on my flight down. Fast forward to me on the field pregame set up for the taping at 4pm. Sunlight was key, and because the segment aired in the morning, it was supposed to be fake live (another TV reference). Beating sunset was essential. I frantically called him… “How far away are you?!?!”… “Wags, they’re out of minivans at Hertz, I’m doing the best I can…” Then 15 minutes later, he’s on his phone talking to me, and I hear him yell across to someone “They don’t take credit cards at the tolls here??? Wags I gotta so… see you in a bit… driving as fast as I can.” I had to laugh at all of this, because I knew he was doing the best he could, but it’s a helpless feeling waiting. In the end he made it, it was quite dark behind him because 4pm turned into 5:30pm, but we got it all done. Wasn’t our prettiest segment I’ll say.

I loved those years with Steve. He’s the reason I have one of my Emmy’s. Sunday NFL Countdown won an Outstanding Studio Show Emmy that year, and I was awarded one as a Segment Producer. Never would have won it without him.