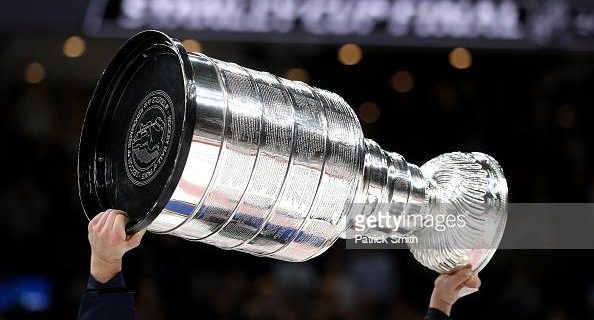 Welcome to this year’s edition of the Stanley Cup Semifinals, where four teams will battle for the right to become the final two squads to square off for the most famous trophy in sports.

Technically, yes. In a normal season the National Hockey League has the winners of each division in the East and West face off against one another to determine who will face the winner of the opposing conference. But this is anything but a typical season.

Due to the NHL temporarily realigning thanks to COVID-19 and the closure of the Canadian border, conferences were abolished in 2020-21 in favor of more regionalized divisions. The winners of those groups will be matched up based on regular season records to determine this year’s Cup finalists.

Throughout the postseason, Buffalo Sports Page will provide you with series previews and predictions from the start of round one through the finals. Previews will become more in-depth as the playoffs roll along, but for now here is our analysis of the semifinals. 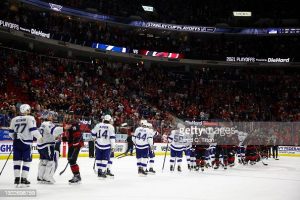 The reigning champions and a powerhouse in the Eastern Conference over the last decade, the Lightning are deeper than they’ve ever been. Youngsters like Brayden Point, Mikhail Sergachev, Yanni Gourde and Anthony Cirelli and imports like Barclay Goodrow, Blake Coleman and Ryan McDonagh have joined Steven Stamkos, Nikita Kucherov, Ondrej Palat, Tyler Johnson and Alex Killorn to build a juggernaut. Andrei Vasilevskiy is widely regarded as the best goaltender in the NHL and Victor Hedman is the reigning Conn Smythe Trophy winner. To get to their sixth semfinal/conference final appearance in the last 11 years, the Lightning downed the Florida Panthers and Carolina Hurricanes in six and five games, respectively. 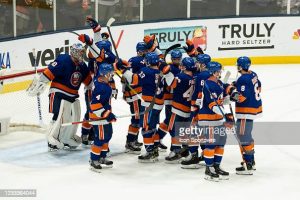 UNIONDALE, NY – JUNE 09: The New York Islanders celebrate the victory after the third period of Game 6 of the NHL Stanley Cup Playoffs Second Round between the Boston Bruins and the New York Islanders on June 9, 2021, at the Nassau Veterans Memorial Coliseum in Uniondale, NY. (Photo by Gregory Fisher/Icon Sportswire via Getty Images)

After John Tavares’ defection to Toronto three years ago, most believed the New York Islanders would suffer a major downturn. Not so. Talents like Matthew Barzal, Jean-Gabriel Pageau, Josh Bailey, Anthony Beauvillier and Brock Nelson have turned the Islanders into Cup contenders and are supplemented by strong defensive talents in Ryan Pulock, Adam Pelech, Scott Mayfield and Nick Leddy. Veterans like Travis Zajac and Kyle Palmieri were brought in by general manager Lou Lamoriello to help Matt Martin, Casey Cizikas and Cal Clutterbuck play in coach Barry Trotz’s smothering defensive system – they were needed more than ever after captain Anders Lee suffered a torn ACL – and Semyon Varlamov and Ilya Sorokin have split the starting goaltender duties. The Islanders have gotten to this point by eliminating both the Pittsburgh Penguins and Boston Bruins in six games apiece.

Islanders in seven. These two franchises met in last year’s Eastern Conference Final and the Lightning advanced by beating New York in six games. This corner believes that while the Bolts won’t go down without a fight, the Islanders are battle-tested and know what it will take to defeat them this time around to advance to the Final for the first time since 1984. 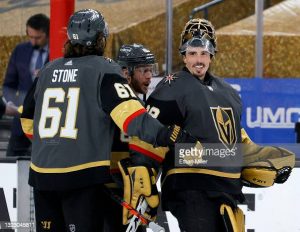 LAS VEGAS, NEVADA – JUNE 10: Mark Stone #61, Jonathan Marchessault #81 and Marc-Andre Fleury #29 of the Vegas Golden Knights celebrate the team’s 6-3 victory over the Colorado Avalanche to win Game Six of the Second Round of the 2021 Stanley Cup Playoffs at T-Mobile Arena on June 10, 2021 in Las Vegas, Nevada. (Photo by Ethan Miller/Getty Images)

The Golden Knights followed up their first three seasons with another strong outing and are one of the better outfits in the Western Conference. Led by William Karlsson, Jonathan Marchessault and Reilly Smith, the Golden Knights have augmented their core group with experienced pros like Mark Stone, Alex Pietrangelo and Max Pacioretty and are a team that relies on speed and a strong forechecking game. Coach Peter DeBoer has kept this team on course while Robin Lehner and Alec Martinez have lightened the loads of headliners Marc-Andre Fleury and Shea Theodore. Vegas knocked out the Minnesota Wild and Colorado Avalanche on their way to their third appearance in the conference final/semifinal round in their first four years of existence. 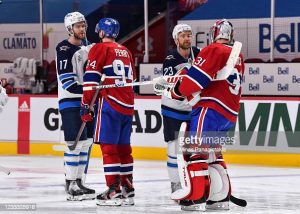 MONTREAL, QC – JUNE 07: Adam Lowry #17 and Trevor Lewis #23 of the Winnipeg Jets shake hands with Corey Perry #94 and Carey Price #31 of the Montreal Canadiens following the Canadiens 3-2 overtime victory to close out the series in Game Four of the Second Round of the 2021 Stanley Cup Playoffs at the Bell Centre on June 7, 2021 in Montreal, Canada. The Montreal Canadiens defeated the Winnipeg Jets 3-2 in overtime and eliminated them with a 4-0 series win. (Photo by Minas Panagiotakis/Getty Images)

After an up-and-down beginning to the year, Canadiens coach Claude Julien was let go in favor of Dominique Ducharme and Montreal continued to be so-so in regular season play. Since the postseason began, however, the Habs have been red-hot. Up front Montreal is led by Tomas Tatar, Phillip Danault, Brendan Gallagher, Nick Suzuki and Jesperi Kotkaniemi, while the Habs’ headliners on the back end are captain Shea Weber and Jeff Petry. Pickups from outside the organization like Tyler Toffoli, Josh Anderson, Corey Perry and Eric Staal have given the Canadiens some added scoring punch, but what has boosted the Habs’ postseason success is the play of Carey Price. Price endured two of the worst seasons of his career but has rediscovered his status as one of hockey’s elite goaltenders – helping Montreal edge out the Toronto Maple Leafs and Winnipeg Jets to reach their third conference final/semifinal appearance since 2010.

Golden Knights in five. While Montreal has had a better-than-expected performance in the 2021 playoffs, it won’t be enough to get past one of the best teams in hockey. Unless Price continues his recent excellent play, Vegas will advance to the Final for the second time in in four years.