TONY’S TAKE – A PREVIEW OF 49ERS-COWBOYS 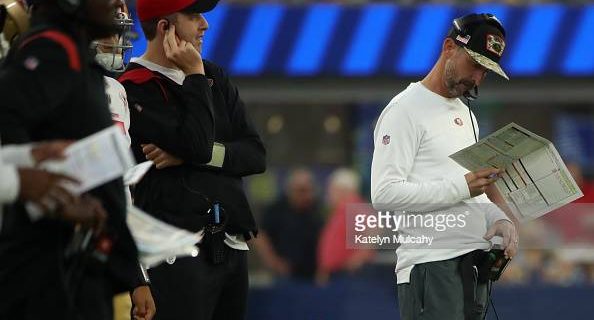 INGLEWOOD, CALIFORNIA - JANUARY 09: Head Coach Kyle Shanahan of the San Francisco 49ers looks over a playbook during overtime against the Los Angeles Rams at SoFi Stadium on January 09, 2022 in Inglewood, California. (Photo by Katelyn Mulcahy/Getty Images)

One of the NFC’s wild card games will take place at AT&T Stadium in Arlington, Texas as the San Francisco 49ers will face the Dallas Cowboys. Here’s what you should know: 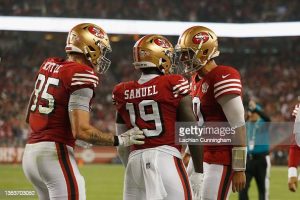 SANTA CLARA, CALIFORNIA – NOVEMBER 15: Deebo Samuel #19 of the San Francisco 49ers celebrates with quarterback Jimmy Garoppolo #10 after scoring a touchdown in the fourth quarter against the Los Angeles Rams at Levi’s Stadium on November 15, 2021 in Santa Clara, California. (Photo by Lachlan Cunningham/Getty Images)

49ERS’ OFFENSE A CHIP OFF THE OLD BLOCK

49ers head coach Kyle Shanahan has one of the top offensive minds in football. His philosophies about the game were directly influenced by his father – former 49ers offensive coordinator and Denver Broncos and Washington head coach Mike Shanahan – and by his assistants, most notably Gary Kubiak, Rick Dennison, Sean McVay and Matt LaFleur. Having observed their work in San Francisco and Denver and being colleagues with them in Houston, Washington and Atlanta, Shanahan’s taken bits and pieces from all of them to create his own attack by the Bay.

The 49ers’ offensive system relies on smaller, quicker linemen who can work in unison and push defenders horizontally on outside zone running plays while leaving cutback lanes for ballcarriers. Executing these blocks are All-Pro Trent Williams (one of the NFL’s most mobile left tackles who excels on screens), Laken Tomlinson, Alex Mack, Daniel Brunskill, Tom Compton (filling in for the injured Mike McGlinchey) and versatile fullback Kyle Juszczyk.

While the outside/wide zone is the team’s foundational run, Shanahan will also use power plays, traps and counters as a changeup tactic and will throw in some misdirection concepts like end-arounds and reverses as well. These are usually carried out by veterans Raheem Mostert (who is out for the season with a knee injury), Elijah Mitchell and Jeff Wilson Jr. Countless tailbacks have had success in it over the years and most of San Francisco’s runs are executed out of “21” personnel (two backs, one tight end).

The 49ers like to have two running backs on the field most of the time in order to give credibility to the belief that they will call a running play at any time, and it also takes advantage of smaller defenders who are used to being on the field to stop the pass and creates more vanilla coverages. According to former MMQB/SI writer Andy Benoit, “Shanahan plays with two backs more than any schemer, by a wide margin…. with two backs in, the Niners compel defenses to prepare for more run possibilities, which limits their options in coverages. Shanahan exploits the suddenly predictable coverages through route combinations or mismatch-making formation wrinkles.”

Handing the ball off to them has been quarterback Jimmy Garoppolo. “Jimmy G”, as some like to call him, is a former backup to Tom Brady in New England and was acquired in 2017 for a second-round draft pick. When he’s been on the field and healthy, Garoppolo has shown to be intelligent, decisive and accurate (especially in the play-action game, which creates defined reads for him) and possesses a quick release, solid arm strength and good mobility. Yet he’s rarely healthy or consistent, prompting Shanahan to draft strong-armed rookie Trey Lance from North Dakota State in the spring.

San Francisco’s weapons in the passing game are dangerous. Two-time All-Pro tight end George Kittle has blossomed into one of the league’s best at his position and is dominant both in the receiving game and at the point of attack. Speedsters Deebo Samuel and Brandon Aiyuk are similar receivers – each are polished route runners, have good hands and are adept at picking up yards after the catch. They can also return punts in a pinch and are liberally used by Shanahan in jet and orbit motion to influence defenders’ responsibilities. Samuel has also emerged as a dangerous ballcarrier on reverses and end-arounds, and will sometimes line up at running back.

Passing-wise, the 49ers are aligned with the West Coast offense’s principles. A ball-control passing game that can eat up clock while stretching teams from sideline to sideline rather than vertically, this version of the system features mobile quarterbacks who can move within the pocket, especially on bootlegs, rollouts and play-action.

It also will have its skill players line up anywhere on the line of scrimmage to try and get defenses to declare their coverages, and aligns wide receivers close to the offensive line to give them more space to operate and to block on running plays. The scheme makes excellent use of shifts and motions (especially to create false reads and favorable angles in the running game) and the receivers typically execute intertwining route combinations, especially ones involving posts, crossing patterns and flood concepts with pass options at the deep, short and intermediate levels.

San Francisco has had solid production in 2021, finishing the season 12th in passing and seventh in rushing. 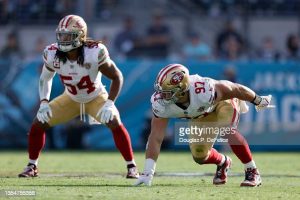 JACKSONVILLE, FLORIDA – NOVEMBER 21: Fred Warner #54 and Nick Bosa #97 of the San Francisco 49ers during the third quarter against the Jacksonville Jaguars at TIAA Bank Field on November 21, 2021 in Jacksonville, Florida. (Photo by Douglas P. DeFelice/Getty Images)

When Shanahan was hired by San Francisco, he brought in Robert Saleh, a longtime protégé of Gus Bradley, as his defensive coordinator. Bradley was one of the original architects (along with Pete Carroll) of the Seattle Seahawks’ fabled Cover Three defensive scheme (featuring deep zone coverage on the outside with a safety in the box and a deep safety patrolling centerfield), which they employed en route to back-to-back NFC championships and a Super Bowl title between 2013-14.

Saleh has since become the head coach of the New York Jets and his replacement was linebackers coach (and former player) DeMeco Ryans. Ryans has kept the 49ers’ system intact and they ended 2021 seventh against the run, sixth versus the pass and fifth in sacks. Their base coverage remains Cover Three, but they have added in more split safety zone coverages like Two, Four and Six to not get beaten by deep crossing patterns.

The prototype for Cover Three-style cornerbacks for years has been for them to have length and an ability to excel in press coverage – so much so that the 49ers made sure that three corners on their roster (former All-Pro Josh Norman, Dontae Johnson and Ambry Thomas) are at least 6’0”. K’Waun Williams, Emmanuel Moseley and Deommodore Lenoir are also important cogs on this unit (Jason Verrett is normally a part of this team too but he is once again out with a major injury). Safeties Jimmie Ward – who has found a home at free safety after changing positions a lot in his earlier years – and Jaquiski Tartt are the starters on the back end.

The 49ers have an excellent pair of linebackers for their nickel packages in underrated sideline-to-sideline playmaker Dre Greenlaw and one of the league’s best in Fred Warner (Azzez Al-Shaair is their third linebacker). In front of them is normally one of the NFL’s deepest defensive lines made up of Nick Bosa, Dee Ford, Arik Armstead, Javon Kinlaw, D.J. Jones and Samson Ebukam.

All of these players are adept at controlling one or two gaps when defending the run, and Ryans – like Saleh before him – uses one or two of his linemen to two-gap while the rest of the front seven will control just one, which eliminates the potential holes for opposing running backs to go through. Ryans will also have his linemen liberally execute stunts, twists and slants to open up one-on-one opportunities in pass rush situations. Unfortunately for San Francisco Ford has barely played over the last two years with neck/back issues and Kinlaw is out with a knee injury. 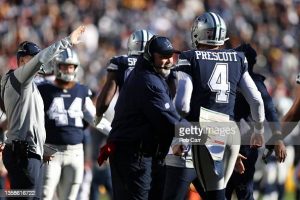 LANDOVER, MARYLAND – DECEMBER 12: Head coach Mike McCarthy of the Dallas Cowboys celebrates with Dak Prescott #4 after successfully converting a two-point conversion during the first quarter against the Washington Football Team at FedExField on December 12, 2021 in Landover, Maryland. (Photo by Rob Carr/Getty Images)

COWBOYS’ OFFENSE A MIX OF OLD AND NEW IDEAS

The foundation of Dallas’ passing attack was the vertical-based Air Coryell system for the better part of three decades, but with the hire of former Green Bay Packers coach Mike McCarthy last year the offense has gotten a facelift. The melding of McCarthy’s version of the West Coast offense with the Cowboys’ former approach under previous head coach Jason Garrett has yielded good results with Dallas being third in the NFL in passing, ninth in rushing and pacing the league in scoring this year.

It is coordinated by play caller Kellen Moore, who rose to the position three years ago. Moore has added more formations, motions and intricate route combinations to this attack, a refreshing change for an offense that previously utilized static formations and isolation routes that relied on a receiver’s talent to get open. The trigger man for Moore’s system is Dak Prescott, whose mobility helps Dallas remain dangerous on play-action, bootlegs, rollouts, zone-reads and RPOs – all plays that are built off the run.

Prescott is an interesting quarterback to evaluate and is playing well. According to former MMQB/SI writer Andy Benoit, “Prescott does many things well; he commands the field in spread-empty formations, makes the occasional big-time throw and poses a threat as a perimeter runner, keeping edge defenders from attacking down on Dallas’ zone runs….. Then there are the negatives. Prescott’s arm is merely adequate, and he’s not always great at reading a field quickly.”

Prescott’s weapons are four-time Pro Bowl wide receiver Amari Cooper. His arrival from the Raiders three years ago, the emergence of Michael Gallup (out with an injury) as the boundary ‘X’ receiver and the importation of speedster CeeDee Lamb has rejuvenated a passing attack that had previously relied on Ezekiel Elliott’s sublime abilities in the screen game. Dalton Schultz and Blake Jarwin are the Cowboys’ tight ends. 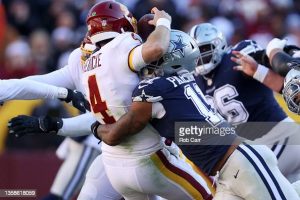 LANDOVER, MARYLAND – DECEMBER 12: Micah Parsons #11 of the Dallas Cowboys forces Taylor Heinicke #4 of the Washington Football Team to fumble and is returned for a touchdown by Dorance Armstrong #92 during the first quarter at FedExField on December 12, 2021 in Landover, Maryland. (Photo by Rob Carr/Getty Images)

Former Seattle Seahawks defensive coordinator and Atlanta Falcons coach Dan Quinn is a strong proponent of the Cover Three scheme (deep zone coverage on the outside with a safety in the box and a deep safety patrolling centerfield) and has had excellent results in Big D while also mixing in more single-high man coverages. While the Cowboys were so-so against the pass (20th), rushing yards allowed (16th) and sacks (13th), they were ranked first in interceptions and seventh in points allowed.

Given that Dallas rarely blitzes, their defensive line – led by Demarcus Lawrence, Randy Gregory, Carlos Watkins and Neville Gallimore – relies on slants, stunts and twists at the line of scrimmage to get to the quarterback. They also use them against the run, which helps shut down multiple gaps at once.

Helping their line at the second level are linebackers Micah Parsons (who is the team’s top blitzer), former Falcons safety Keanu Neal and Leighton Vander Esch, who are all intelligent, fast and extremely good in run support and in pass coverage. Neal, however, will miss Sunday’s game due to injury.

The Cowboys are led in their secondary by Trevon Diggs (who led the NFL in interceptions with 11 – tying the team record held by Everson Walls), Anthony Brown and Jourdan Lewis. Their safeties are Jayron Kearse and Damontae Kazee.