TONY’S TAKE – A PREVIEW OF BUFFALO-WASHINGTON 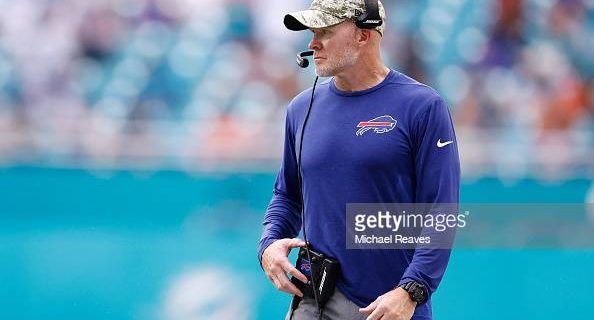 Welcome to Week Three of the 2021 NFL season. Here at Buffalo Sports Page, we will attempt to inform and educate our readers about the Buffalo Bills’ upcoming opponent and what each team might do to emerge victorious.

The Bills’ third game of 2021 will take place at Highmark Stadium in Orchard Park, New York as they face Washington. Here’s what you should know: 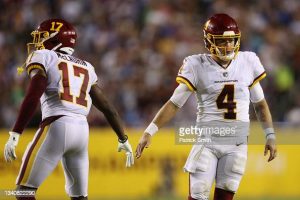 WASHINGTON HAS SOME OFFENSIVE PLAYMAKERS

Longtime Carolina Panthers head coach Ron Rivera took over Washington’s football team before the start of 2020 and has changed the identity of their playbook. Having been rooted in the West Coast offense under previous coaches Jay Gruden, Mike Shanahan and Jim Zorn, Rivera and offensive coordinator Scott Turner (the son of former Washington coach Norv Turner) have brought the franchise back to an Air Coryell-style system, featuring deep-to-intermediate passing and power runs – a type of attack not seen in D.C. since Hall of Fame coach Joe Gibbs roamed their sidelines.

After a season in which Washington had four different starters take turns under center (Taylor Heinicke, Kyle Allen, Alex Smith and Dwayne Haskins), the organization decided to move on from Smith and Haskins and signed 38-year-old Ryan Fitzpatrick, the former Buffalo Bill who started 53 games for them between 2009 and 2012. Now on his ninth NFL team, Fitzpatrick remains a gunslinger. Willing to fight passes into any window, no matter how big or small they may be, sometimes pays off and sometimes it doesn’t – hence Fitzpatrick’s long-standing reputation as a journeyman who throws a lot of interceptions.

Unfortunately for Washington, Fitzpatrick won’t start this weekend because of a hip injury. Heinicke will fill in, and in his three NFL starts has shown limited arm strength and needs defined reads for him to scan defenses along with a clean pocket. He also has displayed a sense of timing and rhythm in his throws along with some intelligence.

Wide receiver Terry McLaurin posted career-highs with 87 catches and 1,118 yards in 2020 while showing the ability to line up outside the numbers and in the slot, while fellow wideouts Curtis Samuel and Adam Humphries remain useful – especially Samuel, who is viewed as a jack-of-all-trades type. Tight end Logan Thomas had a breakout season in his first full year as a starter after transitioning from quarterback earlier in his career, and is an improving route runner with solid hands.

Running back Antonio Gibson was a revelation as a rookie last year while notching over 1,000 combined rushing and receiving yards and 11 scores, and scatback J.D. McKissic compiled 80 catches out of the backfield and in the slot. They operate behind an offensive line that is in the process of undergoing a makeover – All-Pro guard Brandon Scherff is Washington’s best blocker and he is joined by veterans Ereck Flowers, Chase Roullier and Charles Leno Jr. (who is prone to allowing pressure on his inside shoulder) while the inconsistent Sam Cosmi is their new right tackle. Perhaps the Bills can attack the two offensive tackles, especially Cosmi, whose struggles mainly come in pass protection due to up-and-down technique. 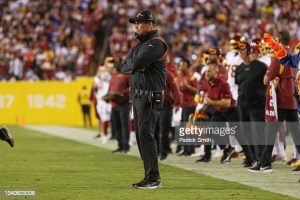 LANDOVER, MARYLAND – SEPTEMBER 16: Head coach Ron Rivera of the Washington Football Team looks on during the second quarter against the New York Giants at FedExField on September 16, 2021 in Landover, Maryland. (Photo by Patrick Smith/Getty Images)

Rivera’s defensive play-caller, former Raiders and Jaguars head coach Jack Del Rio, has transitioned this unit into a 4-3 scheme that is a departure from the 3-4 that the team’s past coaches preferred and has his charges playing at a high level – so high, in fact, that Washington ended 2020 with the second-least amount of passing yards allowed, fourth-least amount of points allowed and racked up 47 sacks – the sixth-best number in football.

Those numbers came courtesy of an elevated blitz rate – Del Rio sent five or more pass rushers at the opposition around 40 percent of the time last year and is doing so at a 43 percent rate this year, the highest in the NFL – and a deep defensive line. Boasting recent first-round draft picks Chase Young (the reigning Defensive Rookie of the Year), Montez Sweat, Daron Payne and Jonathan Allen, Washington – like Buffalo – can win at the line of scrimmage with stunts, slants and twists to create confusion for rival offensive lines. 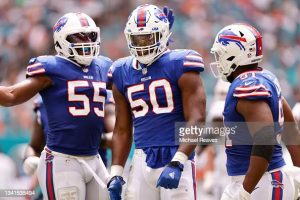 MIAMI GARDENS, FLORIDA – SEPTEMBER 19: Greg Rousseau #50 of the Buffalo Bills celebrates after a sack against the Miami Dolphins at Hard Rock Stadium on September 19, 2021 in Miami Gardens, Florida. (Photo by Michael Reaves/Getty Images)

BUFFALO’S DEFENSE IS GOOD AGAIN – AND GETTING REINFORCEMENTS

Schematically, the Bills’ defense mostly relies on basic zone coverages after the snap but before the snap it is complex – safety rotations to disguise their coverages keep opposing quarterbacks guessing, selective pressure looks at the line of scrimmage and coverage exchanges at the snap are Sean McDermott’s calling card (those blitz looks are usually in the A-gaps from their linebackers to confuse opposing offensive lines and quarterbacks).

The Bills’ defense is usually among the top units in the National Football League in usage of Cover Two, Four and Six, and are also in blitz rate (their blitz rate through two weeks so far is around 26 percent – down from 37.4 a year ago). They mainly utilize nickel personnel, as evidenced by Buffalo using five defensive backs on 90.4 percent of their plays in 2020, the most in the league.

In 2021 the Bills decided to heavily invest in upgrading their pass rush. Rookies Gregory Rousseau and Carlos “Boogie” Basham, along with second-year defensive end A.J. Epenesa and free agent signing Efe Obada have injected a shot of youth behind the aging Hughes and Mario Addison, and defensive tackle Star Lotulelei is back to clog gaps against the run after opting out of 2020.

Those additions helped Buffalo’s defense terrorize Miami last week to the tune of six sacks and three turnovers. Frazier creatively used many six and seven-man fronts along the line of scrimmage along with zone blitzes characterized by Rousseau dropping into coverage and Edmunds and Milano rushing the quarterback. Yet no one benefited more from the gameplan than Epenesa, whose nine pressures in Week Two was the third-most of any defensive player since last season (behind All-Pros Aaron Donald and T.J. Watt) and was the most by any Bills defender since Hughes generated 15 against the Minnesota Vikings three years ago. 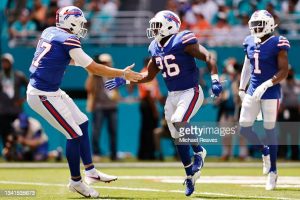 MIAMI GARDENS, FLORIDA – SEPTEMBER 19: Josh Allen #17 of the Buffalo Bills celebrates with Devin Singletary #26 after his rushing touchdown during the first quarter against the Miami Dolphins at Hard Rock Stadium on September 19, 2021 in Miami Gardens, Florida. (Photo by Michael Reaves/Getty Images)

Allen – last season’s runner-up for MVP – set Bills’ team records for completion percentage, completions, passer rating, passing yards and passing touchdowns in 2020. His improved processing skills, ball placement, patience within the pocket and touch on passes allowed Buffalo to become one of the most explosive attacks in pro football.

His core of targets is deep and extremely talented. Stefon Diggs is an exceptional route runner (much like the rest of his teammates), excels in making contested catches and operates well out of bunch and stack formations. His presence along with physical youngster Gabriel Davis has balanced out Buffalo’s wide receiver corps already boasting veteran Emmanuel Sanders and crafty slot receiver Cole Beasley.

Buffalo’s offense is a Patriots-style system built upon concepts involving option and crossing routes from the slot, downfield routes from the outside, designed quarterback runs to take advantage of Allen’s mobility, deep dropbacks and alignments that create favorable matchups (and some trick plays with jet/orbit motion and sweeps with Isaiah McKenzie). They also used more pre-snap motion and expanded upon their play-action and screen game greatly – mostly out of 11 personnel groupings (one back, one tight end and three wide receivers) and 10 personnel (one back, no tight ends, four receivers).

In fact, the Bills used multi-receiver sets so often that they lined up in 11 personnel on 71 percent of their offensive snaps and 10 personnel on 14 percent of their plays in the regular season. In 2020, they used four wide receivers or more 155 times – the second-most in the NFL – and they utilized someone in pre-snap motion 43 percent of the time, a huge increase from their 25 percent rate in 2019. Offensive coordinator Brian Daboll also called for a passing play on first down 64 percent of the time, according to ESPN Stats and Information – no team with a winning record in the last 20 years did it more often than Buffalo.

The Bills’ offensive line isn’t made up of slouches either. Composed of Dion Dawkins, Jon Feliciano, Mitch Morse, Cody Ford and Daryl Williams, this unit can hold their own in pass protection and mainly execute outside zone runs almost exclusively to the left side of the line, along with zone read-options, pin-and-pull concepts, draw plays and split inside zone sprinkled in for running backs Devin Singletary and Zack Moss.

The book on slowing down the Bills’ offense – as evidenced last season in losses to Kansas City and Tennessee and in Week One against Pittsburgh – has been to rarely blitz, lean on zone coverage with a lot of stunts from defensive lines with mixed fronts and late movement in secondaries. This approach can hold Allen in check, will Washington attempt a similar gameplan? 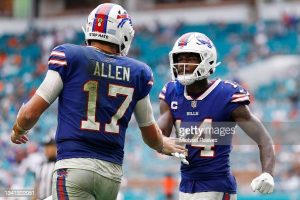