TONY’S TAKE – A PREVIEW OF GIANTS-EAGLES 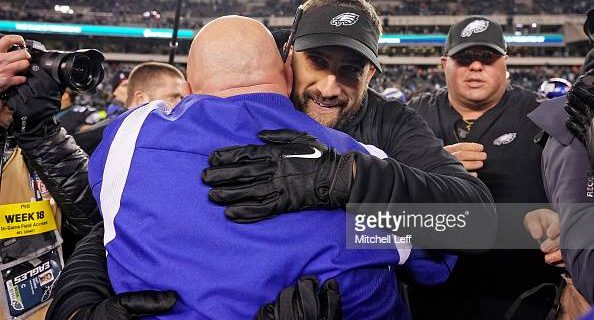 Welcome to the 2022 NFL season’s Divisional Round Weekend. Here at Buffalo Sports Page we will attempt to inform and educate our readers about the upcoming playoff games and what each team might do to emerge victorious.

One of the NFC’s divisional round games will take place at Lincoln Financial Field in Philadelphia, Pennsylvania as the New York Giants will face the Philadelphia Eagles. Here’s what you should know: 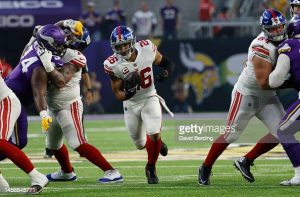 MINNEAPOLIS, MINNESOTA – JANUARY 15: Saquon Barkley #26 of the New York Giants rushes during the first quarter against the Minnesota Vikings in the NFC Wild Card playoff game at U.S. Bank Stadium on January 15, 2023 in Minneapolis, Minnesota. (Photo by David Berding/Getty Images)

GIANTS OFFENSE, WHILE NOT OVERLY TALENTED, IS SUCCEEDING

Brian Daboll, the former offensive coordinator of the Buffalo Bills, Kansas City Chiefs, Miami Dolphins and Cleveland Browns and ex-New England Patriots assistant, is the new head coach of the New York Giants and has become the first coach to take “Big Blue” to the postseason since Ben McAdoo in 2016. His importation, along with new general manager Joe Schoen (also from Buffalo) has brought competency and legitimization to New York.

Daboll’s offensive approach continues to mimic that of what he used in Buffalo and New England – built upon concepts involving option and crossing routes from the slot, downfield routes from the outside, run-pass options (especially in the red zone), deep dropbacks and alignments that create favorable matchups. They also use plenty of pre-snap motion and shifts and have expanded upon their play-action game greatly – mostly out of “11” personnel groupings (one back, one tight end and three wide receivers) and “10” personnel (one back, no tight ends, four receivers).

Daboll and offensive coordinator Mike Kafka (formerly of the Chiefs) have used this scheme to resurrect the career of quarterback Daniel Jones. Jones, a former first round draft pick and the successor to Eli Manning, had struggled for three years while toiling with a franchise that employed two head coaches and little aptitude surrounding him at the skill positions and on the offensive line. Now with Daboll calling the shots, Jones – while not among the league leaders in most statistical categories – has provided a steady hand while cutting down on his interception total to just five and ending 2022 among the top five rushing leaders at quarterback (along with Josh Allen, Justin Fields, Lamar Jackson and Jalen Hurts).

The Giants’ top offensive weapon is running back extraordinaire Saquon Barkley. The 6-foot, 233-pound Barkley evokes comparisons to Marshall Faulk and Barry Sanders for good reason – able to make plays in both the passing and running game, Barkley possesses the strength and quickness to break tackles and slither in and out of gaps. The quote “Give me 18 inches of daylight, that’s all I need” from Hall of Famer Gale Sayers certainly applies to New York’s tailback, as he can make big plays with his change of direction, burst and excellent vision.

After accumulating over 2,000 yards from scrimmage and 15 total touchdowns as a rookie in 2018, Barkley’s production dipped over a span of three years mainly due to injuries and ineffectiveness. But Barkley’s enjoyed a career renaissance in 2022 with 1,650 yards from scrimmage and 10 scores, and he hasn’t done it alone – he has performed behind multiple blocking schemes executed by a rebuilt offensive line. Former first round picks Andrew Thomas and Evan Neal, ex-Bill Jon Feliciano and guards Mark Glowinski and Nick Gates are the Giants’ starters in the trenches.

Following wide receiver Sterling Shepard’s season-ending injury, the Giants’ main wideouts have been the unsung Darius Slayton, Isaiah Hodgins and Richie James. Kenny Golladay, the former Detroit Lion, has been a major disappointment following a big free agent contract with just 43 catches and one touchdown – caught in this year’s season finale – in two years in the Big Apple. 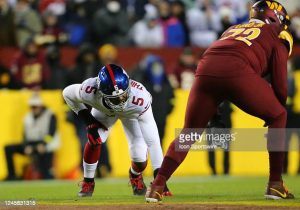 NEW YORK’S DEFENSE NOT ELITE, BUT HAS GOOD SCHEME

Coordinated by Don “Wink” Martindale, the former defensive shot caller for the Baltimore Ravens, New York blitzes at one of the highest rates in the league and mostly does so on overload and fire zone rushes out of single-high coverage looks. He has multiple front looks he’ll show at the line of scrimmage – oftentimes showing six or seven-man rush schemes but bringing just five, making him one of the hardest defensive coaches to gameplan against.

Not to be confused with the “Big Blue Wrecking Crew” of the 1980s with names like Lawrence Taylor, Harry Carson, Carl Banks, Pepper Johnson and George Martin or the Giants’ defense of the 2000s with Michael Strahan, Justin Tuck, Osi Umenyiora, Jessie Armstead and Jason Sehorn, this New York team has some talent, but few blue chip prospects. Kayvon Thibodeaux, the fifth-overall draft pick out of Oregon, has shown flashes of his pass rush ability but finished with just four sacks while adjusting to life in the pros. Dexter Lawrence and Leonard Williams can do a little bit of everything – filling gaps against the run and get to the quarterback – and they are joined by Azeez Ojulari on the team’s defensive line.

At linebacker, New York has a hodgepodge of veteran castoffs surrounding a rookie. Micah McFadden, a fifth-round pick in 2022, is joined by ex-Cowboy Jaylon Smith, agile former Lion Jarrad Davis and Landon Collins (who has returned after a three-year stint in Washington), who is solid in both man and zone coverage against running backs and tight ends – which serves him well as a one-time safety.

On the back end “Big Blue” has three defensive backs brought in via free agency in Adoree’ Jackson, Fabian Moreau and Tony Jefferson while slot corner Darnay Holmes and safeties Julian Love and Xavier McKinney were acquired via the draft.

Despite the excellent scheme, Martindale’s charges haven’t performed that well in 2022. 25th in totals yards given up, 14th against the pass and 27th versus the run (along with being 18th in points allowed, 25th in takeaways and 13th in sacks), this side of the ball has a long way back to respectability. 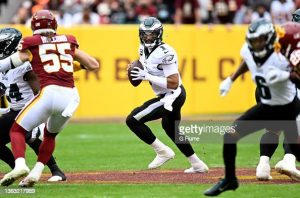 After Doug Pederson brought a Super Bowl championship to Philadelphia in 2017, things began to sour rather quickly in the City of Brotherly Love. Following a deterioration of talent thanks to age, free agency and the salary cap, general manager Howie Roseman let go of Pederson and hired his replacement in former Indianapolis Colts offensive coordinator Nick Sirianni.

Sirianni, who worked for Pederson’s championship-winning play caller in Frank Reich, has brought a similar system to the Eagles. Pederson offense’s – a chip off the old block from his mentor, former Eagles coach Andy Reid – is a West Coast offense-style unit that is built off misdirection concepts, quick underneath throws, screens, bootlegs, run-pass options and occasional downfield route combinations.

While Sirianni does subscribe to those approaches, he has put his own twist on them by getting the ball to his running backs often in both the passing and running game. One of the league’s most patient ball carriers in Miles Sanders and backups Boston Scott and Kenneth Gainwell have been the biggest beneficiaries of this approach as they finished fifth in the NFL in rushing one year after they paced the league.

Helping them in that department has been third-year quarterback Jalen Hurts. Hurts, a product of Oklahoma, has utilized his mobility on several types of read option plays with zone, power and counter concepts built into them and has capitalized by rushing for 13 touchdowns, which broke his own franchise single season record for a quarterback that he set a year ago. He also has a strong arm, and his accuracy, ability to identify coverages and decision-making post-snap has grown by leaps and bounds while executing a passing game that Sirianni has highly schemed for him with defined primary reads. It’s also helped that Hurts has the same offensive coordinator (Shane Steichen) in back-to-back-years for the first time since high school, and he’s set career-highs in passing attempts, completions, completion percentage, touchdowns and passer rating.

To accelerate his growth, Roseman acquired one of pro football’s most physical wide receivers in A.J. Brown from the Tennessee Titans. Brown, perhaps the Eagles’ best pass-catching threat since Terrell Owens, has responded with career-best marks in receptions and yards while tying his four-year high in touchdowns with 11.

The Eagles have depth behind Brown too. Their pass targets include one of the best tight ends in the NFL in Dallas Goedert, a deep threat in DeVonta Smith and reserves Quez Watkins and Zach Pascal have also gotten in on the action.

Blocking for Hurts and his cohorts are All-Pros Jason Kelce and Lane Johnson, Jordan Mailata, Landon Dickerson and Issac Seumalo. This offensive line is one of the best in the NFL thanks to the development prowess of position coach Jeff Stoutland.

Beyond their rushing accolades, the Eagles were also ninth in the league in passing yards and third in scoring. 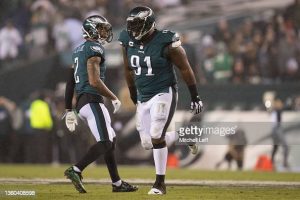 PHILLY DEFENSE HAS BEEN GREAT

Defensive play-caller Jonathan Gannon, who directed the Colts’ defensive backs for three years, is mostly a fan of zone coverage. An avid fan of longtime NFL defensive guru Vic Fangio (now a consultant for the Eagles), Gannon has taken Fangio’s approach and gotten impressive results with them.

Like Fangio, Gannon doesn’t like to blitz much. Relying on a four-man pass rush and two-deep safety looks often, he heavily employs well-disguised hybrid coverages that feature man and zone concepts – especially Cover Four, or “quarters”, with each defensive back dividing the field into fourths and matchup principles to take away vertical concepts. While a base 4-3, Gannon will also mix in some 5-2 fronts to stop the run.

A year after struggling in many statistical categories, the Eagles have seen a quick turnaround. Although they were just 17th versus the run, they ended 2022 second in total yards given up, first against the pass, eighth in points allowed, tied for fourth in takeaways and were first in sacks with an eye-popping 70 – 15 more than the second-closest team (Kansas City). In fact, Philadelphia became just the fourth team ever to reach 70 sacks in a season, along with the 1984 Chicago Bears, ’87 Bears and ’89 Minnesota Vikings, and were just three away from breaking the ’84 Bears all-time record.

To have success this way, you need to get pressure from a defensive line that is deep and talented. Which the Eagles have in spades. In what might be the deepest line in football, Gannon can trot out former All-Pro Fletcher Cox, Brandon Graham, Robert Quinn, Derek Barnett (out with an injury), Javon Hargrave, Ndamukong Suh, Linval Joseph, Josh Sweat and rookie Jordan Davis. Haason Reddick followed up his big free agent contract with 16 sacks while Hargrave, Sweat and Graham had 11 apiece.

Safety C.J. Gardner-Johnson, one of the game’s rangiest and intelligent centerfielders, holds down the back end along with Marcus Epps and can also play slot corner. Cornerbacks Darius Slay, James Bradberry and Avonte Maddox are one of, if not the best trio of corners in the NFL (Gardner-Johnson and Maddox are also asked every once in a while to spy mobile quarterbacks and are quite good at it, but Maddox is out against the Giants with a toe ailment). T.J. Edwards and Kyzir White are Philadelphia’s linebackers.