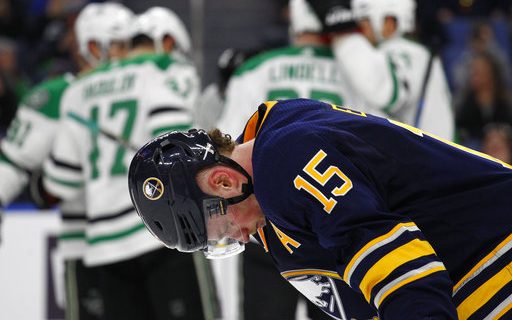 At long last, the Jack Eichel saga has mercifully come to an end.

The Buffalo Sabres on Thursday dealt their embattled ex-captain and a 2023 third-round draft pick to the Vegas Golden Knights in exchange for winger Alex Tuch, center Peyton Krebs, a first-round draft pick in 2022 and a second-round pick in 2023. While no one will know the winner and loser of this trade until a few years down the road, we at Buffalo Sports Page have a few thoughts on this franchise-altering transaction:

THIS HAS HAPPENED BEFORE

The more I think of it, if you take Eichel’s complicated neck injury and future surgery out of the equation, the more I’m starting to realize that his situation in Buffalo was somewhat similar to that of Pierre Turgeon’s.

Both are/were great talents – Turgeon is currently the highest-scoring player who isn’t a member of the Hockey Hall of Fame – and both were high draft selections by the Sabres. Yet too much was placed on their plates too soon. Expectations were astronomical for both, Eichel was instantly painted as the face and savior of the franchise while Turgeon was hailed as the second coming of Gilbert Perrault. Which in many cases are burdens that no 18-year-old can bear.

Neither had the maturity at that stage of their careers to handle those responsibilities, which ended in Eichel being shipped to Sin City and Turgeon traded to the New York Islanders as the centerpiece of a package for Pat LaFontaine. Hindsight may be 20/20, but it’s become more and more apparent that Eichel never should have been given the captain’s ‘C’ to begin with, and the person who should have been bestowed that honor was probably Ryan O’Reilly.

THE RETURN PACKAGE IS SOLID – DON’T RUIN IT!

The acquisitions general manager Kevyn Adams got in exchange for one of the NHL’s best centers – while on the surface appearing to be a bit puzzling – is not a bad return at all, unlike what former general manager Jason Botterill traded for when he sent O’Reilly to St. Louis.

The 25-year-old Tuch, a Syracuse native who grew up in Baldwinsville two houses away from now-retired Sabre Tim Connolly, boasts size (he’s 6’4” and 220 pounds), a scoring touch and speed, and has proven that he can be a productive top-six forward on an NHL team. He could be even better than what his career statistics have shown thus far – his first year and a half with the Golden Knights was spent on the team’s second line but was demoted to the third line after Vegas acquired Mark Stone and took up residence there ever since. In Buffalo, Tuch should slide right into his former role.

Krebs, meanwhile, was regarded by many as Vegas’ top prospect. The 17th overall pick and the Golden Knights’ first round selection in 2019, Krebs was projected by many to be taken within that draft’s top 10 slots but his stock took a hit after suffering a torn Achilles’ tendon before the draft began. Since then his career has progressed to the point where Vegas valued him highly – he’s viewed as a center with high potential who can excel in all three zones on the ice and whose intangibles are off the charts (and given that he’s only 20, he will need some time to marinate with the Rochester Americans before he can be called up to Buffalo on a permanent basis).

You can read more on those two here, as Jillian Wagner of SB Nation did an excellent job of breaking down the games of both Tuch and Krebs:

THIS LATEST REBUILD ATTEMPT APPEARS TO HAVE A PLAN

In addition to Eichel, two other members of the Sabres’ previous roster core were also dealt over the summer in Sam Reinhart and Rasmus Ristolainen. The haul they picked up for those three players include: 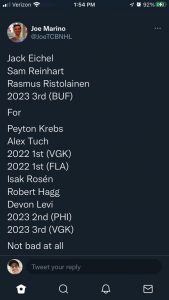 While most of the players acquired were prospects (Krebs, Levi) and future draft picks (three firsts – one used on Rosen – one second and a third rounder), two players were brought in for the present: Tuch and Hagg, who has found some chemistry with Mark Pysyk to start the 2021-22 season.

The one common thing that binds these players together is that none of them are older than 26, and they’re all useful pieces for head coach Tony Granato. How they will pan out remains to be seen, but at least – unlike previous regimes – Adams and Granato have a vision for what they want the Sabres to look like on the ice.