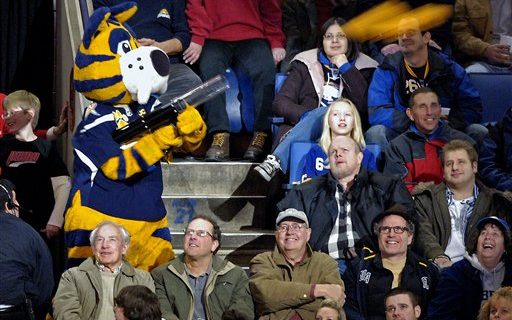 Who's inside the Sabretooth costume? That's just some of the inside info that Ryan Miller may be giving to newest Buffalo Sabre Brandon Montour, according to sports humorist Jeff Wozer. (AP Photo/Don Heupel)

The Sabres traded for defenseman Brandon Montour this week.  One of his former teammates in Anaheim was Sabres great Ryan Miller.  Sports humorist Jeff Wozer has uncovered the advice that Miller gave Montour about his team team and new city.

• WGR’s Paul Hamilton can get you free tickets to the musical “Hamilton.”

• Every kiss does not begin with Kay. In Buffalo it begins with a sixer of Genny Cream.

• Governor Cuomo does a great job as Sabretooth.

• Heads up: Schopp and the Bulldog is a radio show, not the title of a children’s book.

• Need a NY driver’s license? Terry Pegula will take the road test for you.

• If you’re named a Moe’s Hot Player and don’t score expect a barrage of angry Tweets from John Murphy.