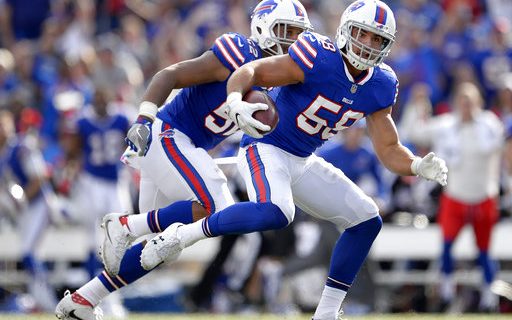 Buffalo Bills linebacker Matt Milano (58) returns an interception against the Buccaneers last season. The Bills defense may be counted on to provide more turnovers that last year. (AP Photo/Adrian Kraus)

For the next 5 days, leading up to the start of Bills Training Camp, Buffalo Sports Page will ask and answer the ten biggest questions facing the team in 2018.

When Marv Levy wasn’t quoting Winston Churchill, he was espousing before and after every game, the importance of winning the turnover battle. Last year’s Bills team monumentalized Levy’s turnover creed. Despite finishing 26th overall in defense and 29th in offense – hardly the rankings of a playoff team – they finished +9 in turnovers, helping mask their deficiencies.

Gone is Tyrod Taylor, the John Birch Society of quarterbacks. Despite his conservative play, Taylor tossed only four interceptions last season. His replacement is unknown. But what is known is that the yet-to-be named starter will be inexperienced. And inexperience at quarterback equates into turnovers. This isn’t a cheap knock on the Bills three candidates – AJ McCarron, Nate Peterman, Josh Allen – but an NFL reality. Peyton Manning in his first year heaved 28 interceptions.

Factor in a potential Shady McCoy famine, a refitted offensive line, and a receiving corps that resembles the NFL’s version of a used car lot of Ford Fiestas and a jump in interceptions looms inevitable.

To compensate for the expected spike in offensive turnovers the team will need to lean on its defense.

Last year’s squad exhibited ballhawking tendencies, with 18 interceptions and seven fumble recoveries. Improving on these numbers is a possibility. The addition of sack-hound Trent Murphy should improve the pass rush. Vontae Davis, if healthy, brings All-Pro swagger to the cornerback position. Rookie middle linebacker Tremaine Edmunds, a human radio tower with the armspan of a California condor, will impede quarterback throwing lanes. And Star Lotulelei, a gap-clogging brute who clogs the middle like a stalled Volkswagen Beetle in rush hour traffic, should improve the run defense, leading to more turnover-friendly long second- and third-down situations.

If the defense can help keep the team’s turnover differential above or near even the Bills may surprise again. Otherwise, the Bills could be in for a long year. If so fans may have to summon their inner Marv Levy’s and grab solace in the Winston Churchill belief that “If you’re going through hell, keep going.”