UB Basketball: Looking Back & Looking Ahead 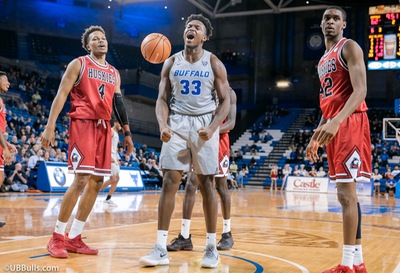 UB's Nick Perkins had a big game to lead the Bulls to a road win at Toledo. (Photo: UB Athletics)

UB hoops had a great week with two road wins in two hostile environments. First the Bulls won in Akron on Tuesday night 76-70. CJ Massinburg led the Bulls with 21 and Dontay Carruthers added 15.

On Friday the Bulls traveled to Toledo and came from behind to beat the Rockets 88-82. This was a very impressive win. The Bulls had blown out the Rockets by 30 at Alumni arena in January. This was a “Holy War” type of game for Toledo. They wanted revenge. Toledo jumped out to a 10-0 and 17-4 lead. To make matters worse the Bulls had foul trouble as well. Dontay Carruthers, Davonta Jordan and CJ Massinburg all had to sit at times because of being in foul trouble. The Bulls battled back to cut the deficit to only three at halftime. This seemed like a major victory for UB. The Rockets had dominated the first half but only led by three.

The Big Man Joined The Band

For the second straight game the Bulls put the game away with good free throw shooting. Against Toledo the Bulls went 23 of 31 from the line. Better defense and good free throw shooting capped off a tough road win. Toledo came into the game with 20 wins. They had a strong NET ranking so this was considered a very strong road win for the Bulls. The victory improved the Bulls to 22-3 on the season and 10-2 in the MAC.

The Bulls now come home for three straight contests. On Tuesday the Bulls will face Ohio. The Bobcats come into the contest having lost five straight MAC games. Their most recent loss was at Central Michigan on Saturday 87-80. The Bobcats are led by Jason Carter and Teyvion Kirk. Carter averages 16 points a game and Kirk scores 15 points and 6 rebounds a game. Ohio enters the game only 3-9 in MAC play.

On Friday another national television audience will be on hand to see the Bulls face Kent State. The game will be televised nationally on ESPN 2. The Bulls defeated Kent 88-79 on January 25th.