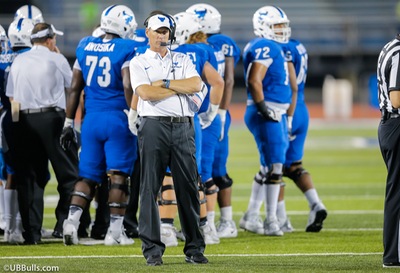 This is the time of year that the college football bible comes in the mail. It’s the Phil Steele college football preview magazine. Good thing college football season is a couple of months away because it takes a few months to make your way through this 352 page magazine jam packed with information. Let’s just focus on one thing so far and that is the UB opponents for this year.

Teams change from year to year so everything can’t be based on what a team did last year. UB went 10-4 last year but obviously the loss of Tyree Jackson and Anthony Johnson is going to hurt them this year. The teams the Bulls play this year had an overall record of 64-84 record last year. Steele had UB with the 11th easiest schedule in college football this year. I’ve seen other people say that UB is in the top five in terms of easiest schedule in the country. Of the 12 opponents UB plays this year only five had a winning record last year. Those five are Penn State, Temple, Ohio, Eastern Michigan and Toledo. UB has three of those five teams at home this year.

Teams sometimes struggle in the first year of a head coach or new quarterback. The Bulls themselves have to replace Tyree Jackson. Time will tell who will be the new signal caller for UB. The good news for the Bulls is many of the teams they face will be in the same boat as them. Five of UB’s opponents this year will have a new starting quarterback. Unlike UB, that has Lance Leipold in place, five UB opponents will also have a new coach on the sidelines. Some of these teams have both a new QB and a new head coach so for the record eight of UB’s 12 opponents will either have a new quarterback or new head coach. You might want to add Kent State that has a second year coach that went 2-10 last year.

UB At a Glance

UB will come in this year with a strong running game led by Jaret Patterson and Kevin Marks. Four of the five starting offensive lineman are back that should help whoever wins the quarterback battle. Just like the QB the wide receivers will play out in August with several new faces trying to make their mark.

Defensively the Bulls should be solid up front with two good pass rushers in Taylor Riggins and Malcolm Koonce coming off the edge. The Bulls return five of their top eight defensive linemen from last year. The back seven will be led by LB James Patterson and CB Aapri Washington who recently were named to the All-MAC pre-season team.

Biggest Game of the Year

The one game that you may want to mark on your calendar is homecoming on October 5th against Ohio. The Bobcats are predicted by Steele to win the MAC East. Last year Ohio thumped UB in Athens so revenge is on the table. If the Bulls hope to go back to another MAC title game this is a game that they must win.

Phil Steele predicts the Bulls will finish third and contend in the MAC East and contend to play in another bowl game. The Bulls play five opponents that were very poor last year in Robert Morris, Akron, Central Michigan, Kent State and Bowling Green. These five games should all be wins. Of the remaining games Temple, Ohio and Toledo are at home. You would think you have a good chance of winning your home games even though they will be against quality opponents. On the road Miami Ohio and Eastern Michigan went 6-6 and 7-6 respectively last year. Again these will be tough but both are winnable games. The only true loss on the schedule at this point looks like at Penn State. So while not predicting another 10-4 season like last year it does appear that the Bulls based on one of the easier schedules in the country should be bowl eligible for a third straight season.