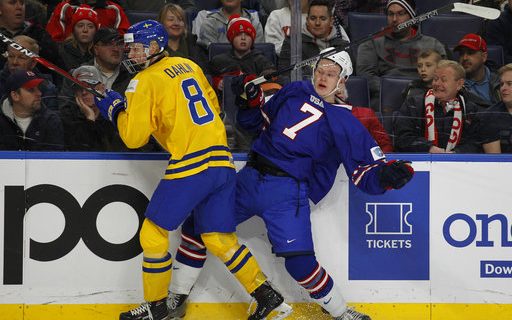 The headline may seem like an overstatement, hyperbole, or whatever else you’d like to call it, but last night’s NHL Draft Lottery win was it. There were some big wins in 2010 to win the Northeast Division, and in 2011 for a near miraculous run to make the playoffs. This feels bigger. It also erases the the previous lottery loss in 2014 when the Florida Panthers took Aaron Ekblad number one overall.  I do not count 2015 as a loss because drafting Jack Eichel was a win.

The Sabres biggest need has been a top defenseman, specifically a puck moving defenseman that can control the game. Tyler Myers looked like that guy his rookie season, but couldn’t maintain that level of performance. Myers is a good defenseman and is having a nice career in Winnipeg. Rasmus Ristolainen is a good player, that expectations of greatness were placed on out of desperation. He’s been the best defenseman on a weak and stressed unit. Brendan Guhle can skate faster backwards than many can skate forwards. He still needs more seasoning, but I think will be a good one. To win in the NHL, you need a great one, and that’s what Buffalo will be getting this June in the entry draft.

Rasmus Dahlin is the consensus number 1 pick in the NHL Draft. It’s not even close. At times, the kid looked like the man in the Swedish Elite League. He’s been compared to Niklas Lidstrom and Erik Karlsson. I’ll take anything close to either Erik, but that’s unfair to the kid at this time. The video below has a good summation from Craig Button, followed by some salivating highlights.

Wow is right! Is he the next Erik Karlsson, Drew Doughty, or Duncan Keith? We won’t know until he’s a few years into his career, but the chances look pretty good.

Is there a better guy to coach Dahlin than Hall of Fame defenseman Phil Housley? I’d argue no. His first year on the Sabres bench was terrible, but I put more of that on the players than Housley. He’s not completely off the hook, but he deserved to stick around, and it’s a good think he did. He has an opportunity to help Dahlin adjust to the NHL, and be the leader to turn the Sabres defensive corp around. Housley made PK Subban a better player (he was pretty good to begin with) in Nashville, and I expect him to guide Dahlin to reach his full potential in Buffalo.