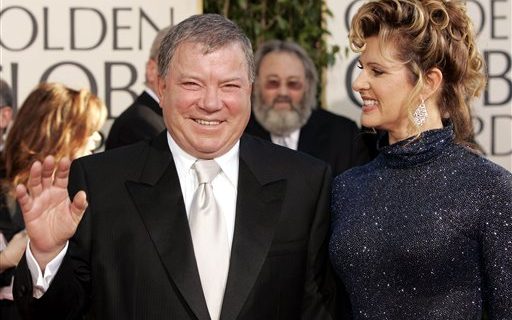 William Shatner, who won best supporting actor in a series, mini-series or television movie for his work on "Boston Legal," arrives with his wife, Elizabeth, for the 62nd Annual Golden Globe Awards on Sunday, Jan. 16, 2005, in Beverly Hills, Calif. (AP Photo/Kevork Djansezian)

So after almost 10 years, in the summer of 2000-something, I left ESPN in Bristol to take a producer position in Los Angeles for a show called ESPN Hollywood that was to launch that fall. Working on a specialized sports and entertainment show while living in sunny southern California? Yes. The positives outweighed the negatives at that point in my life, so that July my brother Scott and I drove from Bristol, CT to Los Angeles, CA – a six day trek. Thankfully Scott stayed with me and helped me navigate through that enormous city until I got settled, then he flew back home. I won’t get into the ESPN Hollywood show in great detail specifically just yet, but basically it was an original studio show, co-hosted by Mario Lopez – yes THAT Mario Lopez – and Canadian born Thea Andrews, who was one of the original hosts of what is now “First Take”, but back then was called “Cold Pizza”.

Our show unfortunately didn’t last long, due to ‘creative differences’ back in Bristol (I love using that term… so rock and roll). ESPN Hollywood was dilligently “slapped” together each day by some of the finest people I ever got to work with. Man, we had fun. I was one of just three people to make the trip west from Connecticut, but once I got to know the people that would be teaming up with to launch the show, I was an honorary Angeleno in no time. The majority of us that worked on EH are all still friends on Facebook now, so it’s nice to still be in touch with them, and I know they will get a kick out of these memories.

Anyhow, one of the challenges of working on ESPN Hollywood was that it was a daily feature driven show with fresh material EVERY day. Not a single piece I remember was ever re-run… probably 4-5 features each show. Amazing. Challenging. That meant that content and ideas were taken from anyone and everyone in the room who had something to offer. It merely had to have some sort of crossover from entertainment into sports to be fair game. Obviously, the bigger the name, the better. Anytime there was an event in Hollywood that had even an inkling of sports content, the ESPN Hollywood microphones and cameras would be there. Movie premieres were gold. Sports movies? Even better. A birthday party at a nightclub on The Strip for T.O.? (…yes, Terrell Owens was quite relevant then) …We’d get a credential. I do miss those impromptu club parties. My party days may be in my past, but let’s be honest locals… Elmwood or Chippewa are not Sunset or La Cienega.

So when it was announced that ABC was having their fall lineup announced at a party in West Hollywood, it was a no-brainer that our show would send a crew. Now one might ask… how was there a sports connection to ABC’s TV original programming schedule that year? There really wasn’t… BUT this was when the show “Desperate Housewives” was at its absolute peak. The celebrity couple at that moment was smokeshow diva Eva Longoria and San Antonio Spurs point guard Tony Parker. For a show like ESPN Hollywood, it sounds funny to me many years later, but I can’t explain what a huge deal this was. This was my first time doing interviews on a Red Carpet, and it was incredible. Let’s just say, glitz and glam beats locker rooms. Sight defeats smell.

In the end, that interview was pretty uneventful and boring (thankfully just my voice OFF camera). When I listened to it after I got back to the office, I sounded so goofy and nervous. You can’t fake that stuff, or at least it takes years of practice to do so. The footage itself of the two of them frolicking at the event got so overused, it wasn’t long before cracks formed on the video from the tape — yes this was the days of tape. TMZ owes a lot to our groundbreaking show.

Now the additional goal that night was trying to get content from all of the other actors and actresses there. You have to understand, Hollywood events had never really been covered by ESPN at that time, and although adding the word Hollywood on our mic flags connected the dots somewhat, I was given plenty of puzzled looks and people saying “ESPN??!!… What are YOU doing here?!?!?”

My favorite moment of this party and the one that is my “go-to” when asked about what it was like working at ESPN Hollywood events goes like this:

In addition to the popularity of “Desperate Housewives”, ABC had just as popular “Boston Legal”, a law drama starring William Shatner, Captain Kirk of “Star Trek” fame. Coincidentally, this was the year the Boston Red Sox ended their curse by winning the World Series. Coincidentally part two, I was also in the midst of working on a piece profiling the Sox biggest Hollywood crossover at the time, Johnny Damon, their shaggy heavy bearded outfielder. Damon had already hosted SNL and had made guest appearances on a bunch of TV shows. Having relevant content from some of the legends of network TV would assuredly give my Damon piece certain credibility. These are the moments you can luck into while working on a feature.

So here is the exchange between me and Captain Kirk (Note: he reeked of booze and had eyes bloodshot out of a cannon. Clearly there was a pre-party.)

“Hi William, so wanted to ask you a few questions for ESPN Hollywood…”

“Yeah, so you guys are on a hit show Boston Legal based in the city that just won the World Series. One of their stars on the team is Johnny Damon, who has already made an impact in Hollywood… what are your thoughts on athletes like Johnny crossing over into the TV and movies scene?”

“Johnny Damon? Oh my God yes…. he has done such wonderful things here already. Incredible things that no one expected. He has brought all of the blacks in the world, the whites in the world, and brought them together (clenching his hands). So much impact in such a short time.”

He then looked directly into our camera. “Who the fuck is Johnny Damon?!?!”