Wags Tribune: Dancing With The Stars 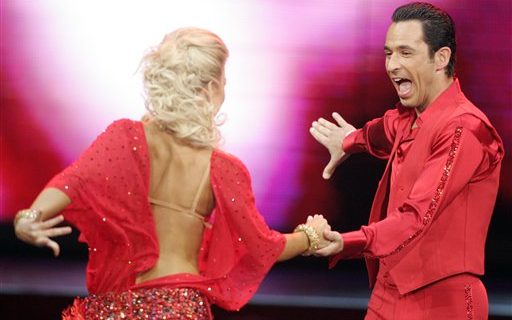 For starters, a couple “Chronicles” ago when I recalled my experiences on The Red Carpet for ESPN Hollywood, one of the main people in my story was former MLB outfielder and Red Sox heart throb Johnny Damon. I swear I had no idea that Damon was going to be announced last week as a contestant on the next “Dancing With the Stars” season. In all honesty, I wish that show would go away, but I don’t watch all that much TV anymore, so if it stayed on for another decade, it wouldn’t affect me too much.

So one of my oddest assignments in my career in the media biz, was getting a call that “the mothership” in Bristol (again credit to Dan Patrick for that term for ESPN) was that a producer in Los Angeles was needed to go get interviews with the athletes at “Dancing With the Stars”. The show was taped at the CBS Studios on Fairfax in Beverly Hills. I always found that strange, because clearly DWTS, as the cool people call it, was a monster hit for rival network ABC. I’m sure the reason why was complicated, so I never pursued an answer.

Anyhow, as I type, I don’t remember the exact athletes of that season. I know one was boxer Floyd Mayweather, also NBA owner Mark Cuban – what an athlete by the way – and there was one more who I can’t remember. Give me a minute to Google it… standby.

So this assignment was for the ESPN First Take show. Way long before its current debate format, the First Take show was a mish-mosh of sports and pop culture, with highlights and guest interviews mixed in. I was asked to get post-dance reaction from the three “sports figures” (sorry Cuban, you’re a sports figure moving forward, not an athlete), and feed it all back to the east coast in Bristol for their show the following morning. Now, full disclosure, ESPN had never given me an assignment as unusual, and honestly one that felt as silly as this. I LOVED IT.

You see, I was still pretty new to the L.A. scene as a producer, and ever since the ESPN Hollywood show had ended the year before, I was strictly working on an “as-needed” basis for ESPN in the SoCal region. Let’s just say that covering a hit Hollywood network show was much more exciting than being sent to cover USC Trojan spring football practice for obvious reasons. Eye candy all over the place, notably gorgeous dancers with flawless bodies, like Julianna herself. Plus it was low stress and frankly, easy… which can be a rare combination, but it happens.

The worst part? Sitting through the show taping itself. My cameraman and myself were required to be there to check in before the taping began. We wouldn’t even begin our interviews until after the show was done. So we had to sit for an hour and a half in a screening room, while the other members of the media – think Access Hollywood, ET, Bravo, E Channel, etc. – would “Ooooh!” and “Ahhhhhh!” while we just shook our heads and messed around on our phones. (His a Blackberry and mine a Treo… this was the late 2000’s) Once the host, what’s his face, signed off, all the media lined up and were escorted onto the dance floor cattle call style to conduct interviews. Being from ESPN carried some clout, so the handlers were good about getting us our guys in a timely fashion. Again, this was an ABC show.

The questions I would ask were as silly as the assignment itself.

“So Helio, how did this compare to actual competion on the racetrack?”

“So Helio, how did your preparation compare to preparing for a race?”

“So Helio, do you feel like you did better this week than last week?”

The answers were just as lame as the questions, and each week they didn’t change that much. Believe me I tried to be creative. The problem was if they fell or something during their routine that night, I may not have been paying attention. Hey, my work ethic was stronger during some of the assignments given to me than others.

I do remember observing a rather entertaining incident involving Floyd though, who coincidentally was super cool to us, but he wasn’t to everyone. Back then, there was this fashion correspondent from Access Hollywood at the taping to talk to all of the contestants. Flamboyant would be an understatement. I’m going to Google again to look up his name, think it was KJ or Cujo… standby again.

Ok… Steven Cojocaru… Kojo. Anyhow, I’m not going to call Floyd Mayweather a homophobe directly – I imagine he has changed a lot in the years since – but I remember this incident where I saw Kojo in the corner of the room in a fit of rage, supposedly because Floyd’s rep had told Kojo that Floyd was not going to grant him an interview. The assumption was that Floyd was afraid to talk to a gay reporter because of his image as “pound for pound the best fighter in the world”. The reaction from the Hollywood media types was actually much more amusing than watching the incident itself go down in front of us. All we heard around us were snickers and whispers of shock and dismay in the room. I can only imagine the eruption on social media if it was 2018. OH THE DRAMA.

Those events were definitely a blast to cover because it presented such a different vibe than the field, court, rink, or locker room. I was able to do a couple more seasons of this DWTS assignment before the suits in Bristol pulled the plug. Some of the notable “sports figures” on those two seasons were NFLers Warren Sapp, Jason Taylor, skater Kristi Yamaguchi, former tennis player Monica Seles… and Kim Kardashian herself! Ok, KK wasn’t a sports figure, but we all know you can connect any Kardashian to an athlete. I never got to interview Kimbers (sad face) because she wasn’t considered “sportsy” enough unfortunately. I did however say “Hi” to her as I walked by her once, so there’s that.

Check out Mike’s other Wags Tribunes including the Red Zone, the Red Carpet & Steve Young.