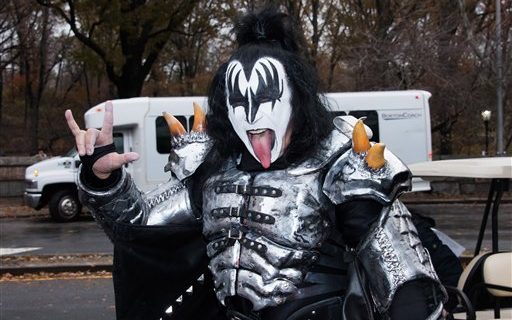 What happened when Gene Simmons of Kiss met golfer John Daly. Mike Waggoner was there, and tells the story in this Wag's Tribune. (Photo by Charles Sykes/Invision/AP)

So this story takes us back to the ESPN Hollywood experience, which I touched on in one of my earlier Chronicles. As a refresher, the content of the daily EH show consisted of anything that crossed sports and entertainment. Of course to fill 30 minutes EVERY day meant there were a few “reaches” along the way. I thought we did some fantastic stuff though. No one had done this type of cross-over program that you see all over the place now.

One of our show producers thought of the idea of having two celebrities – one an athlete, one an entertainer – sit with each other, and basically just “shoot the shit”, while the camera was rolling. There would be very little direction and guidance, no script whatsoever. The interaction would usually start a little slow, because neither person had ever met the other. You had to let the awkwardness play through until the two became comfortable. You then crossed your fingers and hoped for magic.

So my favorite one of these features that I was fortunate to produce was when we introduced one of the PGA’s most colorful golfers, John Daly, to the bassist and singer from the rock band KISS, Gene Simmons. Let that sink in for a second.

Now, this was extra special for me because from the age of 6 (yes, 6) until even now, I’ve been a KISS fan. They’re the classic band you either love or hate. I still remember my grandmother taking my two older brothers and myself to the record store in the Boulevard Mall and letting us each pick one album for ourselves. My choice??? “Love Gun”, by KISS, naturally. I still can see my poor grandmother holding a copy of “Sesame Street Disco”, pleading ‘Mike, are you sure you don’t want this one?’ Again I was 6.

Thankfully to my mom (and grandmother), I didn’t make sense of the lyrics. The makeup though? The blood spitting? The fire breathing? The costumes? KISS was huge for all ages those days. My best buddy, avid Buffalo Sports Page reader, Joe Rine and I would stand on our dressers in our bedrooms with tennis rackets while KISS songs played endlessly on our Fisher Price turntables.

So anyhow… back to the shoot. Our show that day had that morning shot individual ESPN Hollywood features on both Daly and Simmons as well. John Daly was about to begin his own reality TV show “The Daly Planet”, so previewing that was more than enough for a feature to be used in a future show. Meanwhile, Simmons was at our studio promoting KISS’s newfound partnership with Indy Racing League, including writing the song ‘I am Indy’.

So we asked them if afterwards, they wouldn’t mind sitting down in our lounge in front of a couple cameras for a few minutes. It turned out to actually be 15 minutes, but you never want to let it sound longer when you ask a guest for something ‘extra’. Time is more precious to the rich and famous than you and I. (At least it is to them.)

For the first five minutes, Gene and John really didn’t know what to say to each other, and it was predictably a little awkward. I think they overall found the idea a little strange to begin with. However, they realized the cameras were rolling so they started to get into it, and dialogue thankfully improved.

DALY: “Yeah, this is pretty cool sitting here. I loved KISS growing up. I had the KISS lunch box, the KISS belt buckle. I had a friend whose sister had the KISS dolls.”

SIMMONS: “Thanks for the merchandise sales. By the way, we now offer a KISS coffin if you’re interested” (They do!)

SIMMONS: “I hate that fucking song.”

I also remember the subject of marriage coming up. Daly’s second wife, Sherrie, was with him and they appeared that day to be happily married. Simmons, who claimed to have slept with over 10,000 women at the time, famously despised the idea of marriage.

SIMMONS: “The biggest financial pitfall in life is divorce. And the biggest reason for divorce is marriage.”

DALY: “Jesus, Gene. My wife’s sitting right over there… Don’t get me in trouble.”

(Note #2: About a year later, Daly’s marriage to Sherrie would crumble amidst an incident in which she attacked him with a steak knife, leading to a messy divorce that caused Daly some serious dollars. Now, I do not suggest Simmons philosophy on marriage had anything to do with it, but I do find it a little coincidental.)

Toward the end of the shoot, I do remember Simmons giving Daly a brief guitar lesson. Daly actually could play a little bit, and even sang “Knockin’ on Heaven’s Door” in an episode of his “The Daly Planet” show. Then — naturally — Daly returned the favor by helping Simmons adjust his grip on the putter we had in the room.

I think we took the 15 minutes of footage and turned it into a 6 minute feature that was definitely an enjoyable watch. I have no clue where it exists unfortunately. (I’ve moved about 10 times since then.)

Another memorable humorous incident happened right after Daly left. I asked Simmons to do a promo for the show. You know, the basic “Hi, I’m Gene Simmons of the rock group KISS and you’re watching ESPN Hollywood”

So he did a couple takes, and then I asked “Hey Gene those are perfect, now can you just do one and then do your signature stick out your tongue thing?

(Note #3: Simmons in case you didn’t know, is famous for having a dragon-sized tongue and is obnoxiously proud of it.)

His response to my request?

Mike has had some other great Hollywood adventures, including Dancing With The Stars and William Shatner.