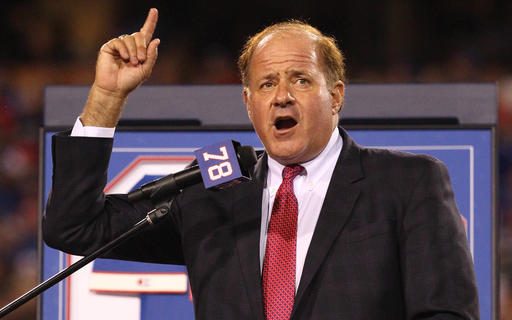 Chris Berman of ESPN has always been a big Buffalo booster. Maybe none more than when he boosted up a young Buffalonian starting his career at the Worldwide Leader in Sports. I'ts the inside story in the latest Wags Tribune. (AP Photo/Bill Wippert, File)

If I’m going to be contributing to Buffalo Sports Page on a regular basis with these anecdotes, it’s only natural that eventually I had to recount my experiences with “Boomer” Chris Berman. Just last month, Boomer made his annual appearance in town, first at Jim Kelly’s celebrity golf tournament, and then as the guest speaker to launch the Buffalo Experience the following day.

I was 23 when I first found out that I was headed to ESPN in Bristol, CT that November following my graduation from Fredonia. This was when Buffalo’s love affair with Berman was in full effect. Yes, the Super Bowl appearances were in the rear view mirror, but his impact on Buffalo was immense. Let’s be honest, our city gets made fun off on a national scale. It’s nothing new. Always the same stale jokes, that frankly, we Western New Yorkers find silly and irritating. To have someone like Boomer with national appeal praise Buffalo, basically taking us under his wing, felt great. He was leading the ride as our Bills teams kept “circling the wagons”.

Getting hired as a production assistant with ESPN was my first “real” job out of college. It was intimidating as shit. The faces you saw every night on Sportscenter were now attached to actual bodies. I remember it was my third day there, during orientation week. I was learning how to “log” a basketball game, and I heard the booming voice. So recognizable. When I turned around, it was Berman himself talking with Charley Steiner, another ESPN old-schooler. I couldn’t believe how large he was. Like the slope of an impossible green while watching golf on TV, it’s just something you cannot grasp unless you see in person. (Note: I was a huge Keith Olbermann fan at the time too, but meeting him as a young PA was a disappointment. The 2018 version of him might be totally different, but back then, despite his brillant writing and highlight reads, he was basically a moody “fat ass”. Again, he might be a completely different guy now.)

Anyone who has ever watched a Chris Berman host a sports show knows his fascination with nicknames. Former Bengal Eric “Sleeping With” Bieniemy, former Panthers QB Jake “Daylight Come and We Got to” Delhomme, ex-Twins pitcher Bert “Be Home” Blyleven… his list is endless. He didn’t stop with the players. When he first met someone at ESPN, he tried his best to come up with a name for as many as he could come up with. A couple of my close friends, Lee Fitting and Greg Jewell, who too have since become Bristol royalty in his footsteps, became known to Boom as “Fitting-Lee” and “Jewell – of the Nile”….. and me? “Daddy Wags.”

One of my most memorable stories working with Boomer was also one of my scariest as a PA in Bristol. I was assigned to a highlight for NFL Primetime, which was about as big of an assignment as you could ever get as a production assistant. You could essentially sink or swim as far as chances for consideration to be promoted to associate producer. Anyhow, I was assigned to the Broncos-Bills highlight that week. I don’t even remember the details of the game specifically. These were not the best Bills years, and frankly this was not my best day.

It was always a scramble to get your highlight together for any NFL game for Primetime. For a 1pm game, you usually were able to log — meaning you’d write down the times of major plays and best footage — the first three quarters on your own, then shuffle off to your edit room to begin the highlight edit process. You’d have a “babysitter” watch your game while you were in the edit room, and you would watch your game on a small TV, while your editor pieced it all together, then on a tape. During this period of frantic multi-tasking, you would be writing your “shot sheet” for Boomer, which is what he used to guide himself on the air through his read of the highlight. Sidenote: It was a sin to try and be “cute” on your shot sheet. You would never write “he could go all the way” or anything. You’d be history.

The most nerve wracking part of this experience for a young PA was when it was time to show your highlight to him in the conference room where most of the significant “big wigs” viewed the games in front of a cluster of monitors with each game being shown. Boomer, Tommy, Jaws, Suzy, Stuart, Ditka, Tirico, and all of the ESPN suits would watch the game there. They’d all witness your highlight to be shown to Boomer for the first time. Scary stuff.

So there I was – Bills Broncos highlight tape in hand. 3:32 in length. The producer Bill Fairweather hits play, and Boomer starts to watch the highlight along with the shot sheet. About a minute and a half into the three and a half minute highlight, he lets out a signature “WHATTTT?!?!? ….Can you replay that 30 seconds back, Billy… (his hands gesturing confusion) There’s a play missing on this shot sheet… WHAAATTTTT!?!?”

Horrified, I realized I messed up. Sick to my stomach, I had to hustle my ass back down to the screening area and then re-write the entire 6 page shot sheet. Time was ticking. I was shaking, freaking out, sweating, as I sped through the fastest writing my hand could ever do. I was embarrassed, scared, angry, disappointed at myself all at the same time because I knew I was better than that.

However, in the end, I fixed it in time for the re-read. After the highlight made its scheduled spot in the show, I was able to relax. It brings to mind that feeling of how you feel when you lose your wallet, phone or keys. You look everywhere, your heartbeat races, but then you find it. You know — THAT feeling. Sidenote: I heard that during my mad scramble, legendary ESPN executive producer Mike McQuade was quoted as saying “THIS is why we don’t give PA’s games in which their favorite teams are playing.” Hahaha.

So after the show that night, I did end up seeing Boomer in the hallway. All I could say was I was sorry. Boomer looked at me and said “Daddy Wags, don’t worry about it. Just slow down. You did a great job with the highlight. Be careful next time, and don’t give it another thought. Go Bills.” As classy as a TV celebrity could be.

You have to realize how many highlights all of us did throughout our time there. Everyone that worked in Bristol has a similar story in which they had a “screw up” involving a highlight and/or a shot sheet. Like in everyday life, you learn from your mistakes. I did end up getting promoted to AP not much later, so it was more a lesson learned than a black spot on my credibility.

One night after a late highlight shift, our friend and fellow production assistant, Dean Maragos, was killed in a car accident. He was just 25, with a huge successful career in TV ahead of him. We were all devastated. At the funeral, I will always remember Chris Berman hugging every crying, grieving, young PA he saw, which I know meant a lot to everyone. To this day, one of Dean’s closest buddies, Scott Turken, organizes an incredible golf tournament in Dean’s name every summer. Coincidentally, they are playing it this week. Boomer will be there, and he has sponsored one of the holes for “The Maragos” every single year.

Mike has more Wags Tribunes with stories of his career, including Dancing With The Stars and covering the Red Carpet in Hollywood.