A look at the control room for the NFL Red Zone channel at the NFL Network studios in California. (Photo: Mike Waggoner)

Editor’s Note:  WNY native Mike Waggoner is a contributor to Buffalo Sports Page.  At various points during his extensive television career, he has worked at ESPN & NFL Network.  That means he has plenty of good stories.  This one is about his time working on what was then a new revelation…the NFL Red Zone Channel.

As far as sports programming goes, there may not be a more unique sports show – I guess you’d have to call it a show — it’s not a game, right? — than NFL Network’s Sunday marathon of football action, Red Zone. It’s hard to believe that it made its debut in 2009. Red Zone has to be the simplest, yet brilliant, concept for televising a pro sport. Basically “trimming the fat” off a full slab of Sunday football games… no commercials, no exhausting replays from 100 different angles (only to get the call wrong), no boring fair caught punts, no made extra points, and no touchbacks on kickoffs. It’s been a game changer.

Having the opportunity to be one of NFL Network’s Red Zone replay producers in 2015 for the second half of that NFL season was without a doubt one of the thrills of my career. To partake in the behind-the-scenes operation of that show was unlike anything I’d ever done up to that point. 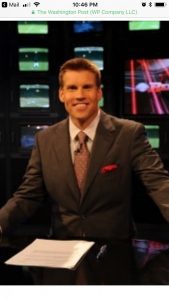 Saying a shift working on Red Zone goes by fast is a complete understatement. To say a shift working on Red Zone is fun may even be more of an understatement. A Red Zone day begins about an hour or so before kickoff in a production meeting hosted by the actual host of the show, Scott Hanson. The vibe is so loose. I’ve never been in a “happier” show meeting, and I’ve attended 1000’s of them. Scott’s a great guy who not only goes through each matchup by bringing up nuggets of info he wants to touch upon in the appropriate spots of each game, but he sprinkles in trivia questions for the room along the way. He awards prizes for correct answers too…. Again like I said, fun.

As one of the producers on the show, McCormick O’ Meara, or “Mac” as we call him, put it best when he told me “The best part of working on Red Zone is its immediacy. On other NFL Network shows, you’re prepping for sometimes five to six hours before the show you’re working on before it eventually gets on the air. As soon as we take the first kickoff from one of the early games, we’re buckled in for seven straight hours doing our best to not miss anything; whether it’s a toe drag one-handed catch, a big 3rd and long conversion, or a sideline eruption between a coach and player. It’s LIVE, intense, and things don’t always go as planned.”

(Mac also has a unique claim to fame, when he became the first person working on the show to ever have his newborn son introduced on the show this past season) 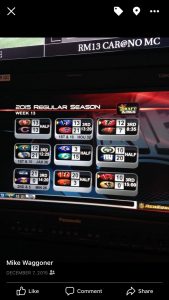 So this is how Red Zone basically works from behind-the-scenes:

There are two EVS machines, or “playback” machines, that each can take 4 separate game feeds in live, so 4 games on each machine = 8 games going at once. Each EVS machine has one producer and one operator. Each feed is titled by color to help simplify the process of the show producer calling out the next needed action to be broadcast.

Some of the ways to keep the flow going are being able to go from “live” shots to “fake live” shots and back and forth, so that it seems like a seemless stream of touchdowns, turnovers, drives, and key injuries. (Like I said, without the other B.S. in all football games these days). The actual show producer in the adjacent control room will make the call through headsets on which game to go to as he sees fit, and lets Scott, the host, know in the studio through his ear piece, so that he is prepared to navigate the action appropriately. They have mastered this to an absolute science. Mistakes happen, but stuff is flying so fast, you barely notice. It’s time to move on, and not look backwards.

This would be the common verbage heard if you were a fly on the wall in the Red Zone control room:

“Mac, hold that touchdown by Dez Bryant on GREEN… Wags, we are going to you LIVE in RED for Patriots-Dolphins, Pats have 1st and goal at the 7… Mac, have that interception by Denver cued up in GOLD though in case they go to commercial in Dallas… Roll GREEN, FAKE LIVE… then to RED for Pats Dolphins LIVE…”

“Let’s go LIVE to Vikings Bears in BLUE… let’s watch that drive for a bit until we have something else… (10 seconds later) Touchdown in Kansas City… Mac, can we get that Kelce TD cued up in GREEN as soon as it’s ready? (9 seconds later) Uh oh…Mariota just got drilled… he’s down in Tennessee game… we may have to switch over to Titans Steelers… Wags, cue that play up to right before the snap… ok everybody FAKE LIVE to GOLD for Tennessee-Pittsburgh… (8 seconds later) OK let’s go back to Minnesota-Chicago LIVE in BLUE… Vikings are inside the 10.”

You get the idea. Ping Pong-ing back and forth and back again. Communication is key. The operators are incredible as far as speed with their hands and fingers. Underappreciated skills. As far as us as producers, the key is keeping those eyes open for any play. With 8 games going on, it can get quite nuts, I mean we have only two eyes apiece.

Like Mac said, this goes on for 7 straight hours! You may wonder how hard it is to stay in one place that long. It definitely presents its challenges. Once, I had too much to drink the night before or the morning of, and as I sat down for my shift and the games kicked off, for the first 30 minutes I was fine. Then I started to feel it. I was squirming, and doing my best to ignore the fact that I had to go really, really bad. The problem is you couldn’t leave your spot, because then the other EVS producer would have to keep his eyes on all 8 feeds, which was an impossibility. I was definitley in a tough spot. An hour and a half later I was hoping it would reverse itself, but no such luck. I couldn’t handle it anymore and let it loose while sitting in my chair.

Just kidding. That never happened. We had guys briefly substitute for us if we had to take quick bathroom breaks. However, host Scott did not have the benfit of a sub, and this past season, actually tweeted about ending a 4-year streak of holding it in.

Ok… I think this is a good spot to end this post.

Check out the other Wag’s Tribune stories, including his time at ESPN Hollywood, and working with Steve Young.