What Jets Trade for #3 Means To The Bills 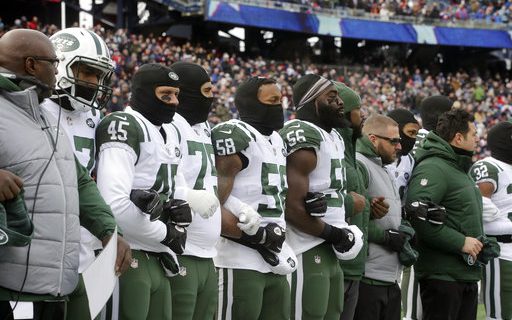 Will the quarterback that the Bills want soon be standing with his Jets teammates? NY's trade for the #3 draft pick has presented a challenge for the Bills front office. (AP Photo/Steven Senne)

The Indianapolis Colts traded out of the number three spot and moved back to number six in the first round. The NY Jets now hold the third spot in the draft.  First of all this was a great trade for Indianapolis. They received five times the value on the trade chart that they should have received for moving back just three spots. The Colts received two second round picks this year and one second round pick next year. GM Chis Ballard should be applauded for the move.

The Jets paid a big price but they are in a prime spot to take one of the top quarterbacks in the draft. The ball is now in the Bills court. What do they do?

Options for the Bills

The Bills could trade up past the Jets to the Giants to the second pick in the draft. The price of that move, which was already high, may have just gone higher considering what the Jets just paid for the third pick. That’s if this pick is even available. The Giants may not want to give this pick up. The Giants may want to take a quarterback, RB Saqoun Barkley or the best pass rusher in the draft, Bradley Chubb of NC State. So there is a good chance that the Giants wouldn’t want to move back. If the Giants did, the Bills would most likely have to give up both first round picks and another first round pick next year. The Bills should hope that the Giants either trade with the Bills or take Barkley or Chubb. The nightmare scenario is the Giants take a QB and the draft goes QB, QB, QB in the first three picks.

Brandon Beane’s relationship with Giants GM Dave Gettleman is huge here. He needs to know what the Giants are doing.

The Bills could trade with Cleveland at four. This works if the Giants don’t take a QB at two. The Bills could still get one of the top QB’s in the draft. The price goes down dramatically as well from the trade chart from two to four.

The Bills could stay at 12 and pick the best QB available. This scenario works if the Bills feel there isn’t a dramatic difference between first and the fourth best QB in the draft.

The problem with trading everything this year for the Giants second pick is the Bills have huge holes to fill at LB, WR and OL. You don’t want to trade everything for a top QB only to have him carted off the field because your offensive line is horrendous.

The problem with not trading up to get a QB is that the Jets could have the QB you wanted and now you have to play that guy and Tom Brady twice a year for the seeable future.