When Do We Get To Play Golf? 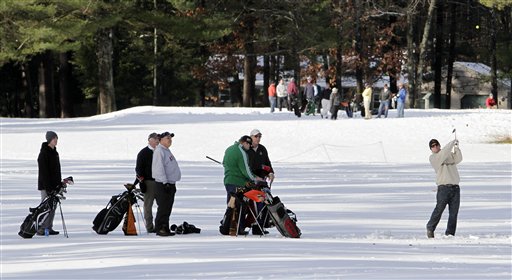 Golfers are seen during the traditional 29th annual Thanksgiving Day golf tournament Thursday, Nov. 24, 2011 in Concord, N.H. More than 100 players showed up at sunrise to play nine holes in the snow covered course.(AP Photo/Jim Cole) This seems like how we're going to start our golf season in WNY.

I’ve got the itch. I bet you do too. It appears every year at this time when we hearJim Nantz greet us from the Butler Cabin. “Hello friends” is the greeting, and it’s what I say to my golf clubs while trying my best silky Nantz impression. I slide them out of the bag one by one while watching players maneuver Amen Corner at Augusta National. I grip each one like I’m hugging my kids upon returning home from a business trip.

It’s good to see them again, touch, feel, and inspect each one while contemplating if they’ll due for another season. Perhaps new grips are in order. I peruse Golf Digest’s Hot List for the newest driver, dreaming of the extra 8 yards the latest fairway slayer can bring me. I’ve been putting all winter long in my basement, working on the paintbrush grip so many professionals now employ. I don’t have a pet, but if I did I’d name it “Putter”. I imagine it would be a similar  love/hate relationship. Times of great joy and fun. Times of disgust and thoughts of riddance.

It’s golf season, and time to scratch that itch. While the azaleas are in full bloom in Georgia, we’re getting used to seeing our grass again. Well, the idea of it anyway. Watching the season’s first Major always gets the juices going. Hearing the birds on the way out to the car each morning for the commute to work is a sign of hope. The emails from my golf club and men’s league seem to hit my inbox daily. The first tee time of the year Is close!

Or is it? This shouldn’t be a surprise to us, but spring sucks around here. It pretty much always has, and probably always will. Sure, we get a day in the mid 50’s and it looks like we’re going to turn the corner, but then a front comes in to kick us in the rear end. Temps struggle to get out of the 30’s. When we do get consistent temperatures in the 50’s, we usually get moisture with it. This causes delay in opening ranges (plug city), tough walks sloshing around the course, and testing out that 2 year waterproof warranty on our golf shoes.

I’ll play in anything. I truly will. Whether it’s cold temperatures or wet conditions my standard line is “they make gear for that, and I own it”. But playing and enjoying are two different things. I play the game because I love it. It brings me peace and joy, even when I bogey (not at that exact moment). I’d rather play golf that most anything else. That being said, there are times I don’t enjoy it very much. Wet and cold are not a great combination of conditions to have a fun round in. I have a feeling that is what we are going to be dealing with this early golf season in WNY. But that’s just a guess, so I thought I’d ask my buddy Patrick Hammer, Chief Meteorologist at Channel 2 for his opinion.

“Like the end of February, this weekend will provide somewhat of a head fake leading us into a false spring. Temperatures will surge this weekend, but tumble once again next week, even with the threat of a few flakes” Hammer said. He also added some of his signature humor, “ Par 5 golf may have to wait until Cinco de Mayo”. Thanks Patrick, and don’t worry, we won’t shoot the messenger. We only want to shoot par.

It looks like we’re dome dwellers through the month of April. I’ll survive, hate it, but I’ll survive. In the meantime, I’ll continue to cuddle my clubs in the basement.