I have done sillier things than drive to Rochester from Buffalo for a baseball game that was rained out after two innings.

I’m the guy that, in 1974, was part of a road trip with three others in which we drove to Cleveland for a double-header with brothers Jim and Gaylord Perry scheduled to pitch for the Indians. About the time we were in sight of the stadium, the team’s radio station announced the twin-bill had been washed out. Where was Don Paul when I needed him to tell me to stay home?

Still, it was disappointing. The weather forecast promised the odd pop-up shower (appropriate for a baseball game, I think), but we figured that at most we’ve have a rain delay. Instead, the rain started to come down in the top of the third in the game between the Rochester Red Wings and Buffalo Bisons. It didn’t stop until well after we were on the Interstate home.

I was consoled by the fact that I had only seen the park once, when it was really hot outside and I was in a small group that was in town for a wedding. Those aren’t ideal conditions for getting a good look around.

Besides, the Bisons were playing this time. I hadn’t seen the Bisons play a game since August, 2019. They were playing practice games, more or less, in Rochester in 2020 because of the pandemic. This year the Bisons are playing out of Trenton until the Blue Jays decide to pack their belongings and go back to Toronto. So some friends who are season-ticket holders and I headed down the Thruway.

Allow me to offer some observations about our trip to Frontier Field, followed by a few photos:

*It was nice to see a baseball jersey with a Buffalo on the front. As to who was wearing a particular shirt, well, that was tougher. The jerseys did not have names on the back. No rosters were in sight either. The only name on the Bisons’ roster I recognized was Richard Vrena, who was in my scorebook for a game played in Buffalo on August 29, 2019.

*Looking around the facility, there was plenty of foul territory on the grounds. It wasn’t Oakland’s home park, but it was still surprising. Frontier Field has the usual signs on the walls, including one advertising “Baldness.com” in left field. I expected the p.a. announcer to say, “Any batter who hits the ball off the baldness.com sign will win a free hairpiece.”

*There’s an old joke about a baseball pitcher who gives up home runs to the first three batters – on the first pitch each time. The manager goes out to the mound and says to the catcher, “What’s he throwing?” The catcher answers, “How should I know? I haven’t caught one yet!” Connor Overton had that sort of start in the bottom of the first of the Bisons. Home run, blast to center that was caught, home run – all on what was the first or second pitch (I think). Luckily, he settled down quite a bit after that.

*Good to see Bisons superfan Mark Aichinger make the trip down the Thruway for the game. Made it feel a little like home.

*There are very few covered seats in Frontier Field, forcing the fans to flee for the concourses when the rains came. Luckily, the facility has plenty of space underneath the stands – complete with some tables. We bought some kettle corn to help pass the time, and waited … and waited. There are tributes to the Rochester baseball hall of fame’s members, and Section V’s best athletes on the walls inside.

*After walking around the grounds during the rain delay, we naturally stopped at the souvenir stand. The items were rather typical, although an International League media guide for 2020 seemed pricey for $20. After all, the season was never played, and the league no longer exists. But … there was a line of items that were interesting. It seems that Maureen Callahan of the New York Post described Rochester as “grim and depressing” in a 2019 column. The Red Wings jumped on concept for marketing purposes, and made up some t-shirts and hats to make fun of it. They even invited her to throw out the first pitch at a game in August 2020, but Covid-19 had other plans. Reminder: There’s nothing worse than a columnist who makes fun of other cities. 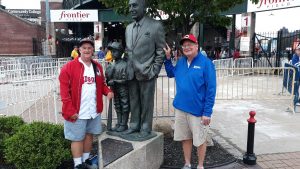 My friends Mark and Mark (that’s Mark on the left) joined me on the trip to Rochester. Since one drove and the other paid for parking, the least I could do is have them pose for a photo with Morrie Silver at the front gate. Morrie helped save minor league baseball in Rochester in 1956. The uniform number of 8222 – the number of original stockholders in ’56 – is retired in Silver’s honor. The field is located on Morris Silver Way. 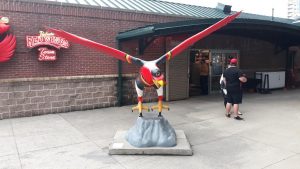 A large red-winged bird guards the souvenir stand to prevent mischief … and pose for photos. 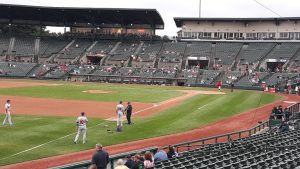 Here’s the view from left field before the game. At the top of the grandstand under the roof is something of a section used for private parties.

We’re not completely done with Covid-19. As you can see, fans are not allowed to sit around the dugouts. 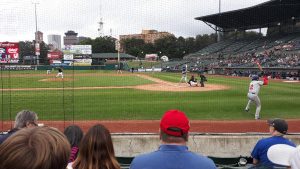 A seat a few rows behind home plate was $22. Luckily, it came with a rain check. The Bisons are supposed to be returning to Rochester in mid-September, so maybe I can put it to good use.