Based on exactly one game – Saturday’s contest in HarborCenter between the Buffalo Beauts and the Boston Pride – it was easy to come to two conclusions about play in the National Women’s Hockey League.

One, everyone can skate.

Two, no one can score.

Yes, it’s a small sample size. Pucks do go into the net in the NWHL during the course of the season. I just didn’t get to see any of them. The Beauts and the Pride played 65 minutes of hockey without a score. Then when the teams moved to a shootout, they needed 10 rounds to decide a winner. For the record, Lisa Chesson got the game-winner – her team’s third shootout goal in the 10 tries – to give the Beauts their fifth straight win. Boston lost its fifth straight.

Has that number of rounds in a NWHL shootout ever been topped?

“Not that I’m aware of, not in this league,” Beauts coach Ric Seiling said. 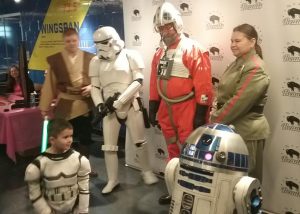 It was a long day at the office for the two teams, thanks to the extra work at the end. It looked like 400 or so fans showed up for the game, paying $15 each to get in. One of the attractions was that it was “Star Wars Night,” although “Star Wars Day” might have been more accurate to describe the matinee matchup. The characters from a galaxy far, far away greeted the children and their parents in the stands.

With the scoreboard needing few updates, the spectators had to wait a while to find something to cheer. The quality of play was quite good, and the women played solid positional hockey. They obviously are well-coached. And, clearly, you need to be able to skate to stay in the NWHL.

“If you look at these teams, almost everyone on the ice is from a D-1 (Division I) school,” Seiling said. “The game is a lot different than what people think. They come here and go, ‘Wow – that’s a good hockey game.’ People don’t realize the intensity of this game – the athleticism, the hockey ability, the skill level of these girls.”

The lack of scoring was a bit of a surprise, considering the opportunities created. The Beauts allowed six of the game’s first seven shots, and then took control. During the next 20 minutes or so, Buffalo had 19 straight shots. Credit Boston goalie Brittany Ott for slamming the door on all 19 of them.

Still, the matchup had plenty of flow throughout the 65 minutes. There weren’t many breaks in the action, but one stoppage was noteworthy. That’s when “Lady of Spain” came over the sound system – a song immortalized in the movie “Slap Shot.” Fans of the cult hockey classic can still recite the order to the organist, “Don’t ever play ‘Lady of Spain’ again!!”

Both teams had their chances in the third period, but the red lights remained off throughout. Buffalo finished the contest with a 47-25 edge in shots, and probably deserved the victory. When the game was over, a girl about four years old gave another toddler in the stands a big hug, smiled broadly, and said, “We won!” It was almost as if she had never seen a sports team in person before, and maybe she hadn’t. Perhaps the young girls hung around to get an autograph or meet the members of the Beauts after the game.

Buffalo is in second place in the NWHL, still trailing the undefeated Metropolitan Riveters (New York City area). The chances of the Beauts hosting their first playoff game in team history look good, with a seven-point lead on third-place Boston with five games left on the regular-season schedule. It’s odd to have a four-team league in a professional sport, even if it’s a way to develop the clichéd “heated rivalries.” But, it’s a start.

“If you look at the talent level of this league with the exception of Boston in the first couple of years, as they had most of the U.S. National Team, more and more players are graduating,” Seiling said. “The draft picks are coming out, and you’re got good players. Where are they are going to go? The idea behind this league was grass roots, to grow this game. Now they have something to shoot for. … They have some place to play after college.”

The league has experienced some growing pains. One team has dominated the regular season in each of its three seasons (Boston in Years One and Two, Metropolitan this time), and the lack of competitive balance hasn’t helped. The NWHL has tried to carve out a niche through social media, as it’s difficult to find news on the league from “traditional” news sources. Earning attention has been a struggle at times. Good luck trying to call one of the teams on the phone for information. And, yes, a record book would be nice.

That’s why the news that Pegula Sports and Entertainment – the company that owns the Bills, Sabres and Bandits – had bought the Beauts was so exciting for the Buffalo franchise and the league. It changed the league’s business model, in which one group had owned all the teams. The idea apparently is to follow the WNBA example and have each women’s hockey team have an association with an NHL team. The Riveters have a “strategic alliance” with the New Jersey Devils. We’ll see if it works.

There hasn’t been much time for the new owners to change much, but eventually PSE will display its marketing muscle. Seiling saw a piece of the future recently just by driving down the Kensington Expressway.

“Coming in the other night, we were on the big electronic billboard on the 33 – ‘Come to Saturday’s game.’“ Seiling said. “It’s a big plus to have that sort of ownership behind you.”