Who’s Next? Which Sabres Are Hall of Fame Worthy? 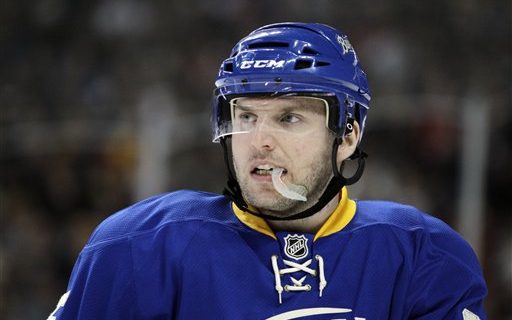 Former Buffalo Sabres' forward Thomas Vanek will be a candidate for teh Greater Buffalo Sports Hall of Fame when he retires. Buddy Bailey looks at what other Sabres may soon be enshrined. (AP Photo/David Duprey)

I’m on the Media Advisory Board of the Greater Buffalo Sports Hall of Fame. We take a look at the candidates for the next class of inductees, and recommend certain players. It’s a difficult job, but a fun one. After all, we have a say in who will be honored for a lifetime of work.

Naturally, I’m always looking for help and advice, and The Hockey News supplied some of both recently. The publication put out a magazine that ranks the 50 greatest players in the history of each National Hockey League franchise. You and I might disagree with some individual rankings, but the writers obviously put some time and effort into their rankings.

Therefore, let’s use that as a starting point for discussion.

I count 21 players who are in the Buffalo Hall with connections to the Sabres.
Here they are, with the Hockey News’ ranking after each name.

Those still playing are disqualified from consideration for the moment. Most of the people in the top 20 who can be in the Hall have been inducted. Therefore, we’ve got the makings of a good list for those who should be considered, at the least, in the near future.

Here’s the list of top contenders (Hockey News ranking in parenthesis); I’ll leave it to you to make up-or-down judgments:

Ryan Miller (6): Will walk into the Hall of Fame as soon as he retires.

Tom Barrasso (11): Here’s where it gets interesting. Barrasso played five-plus years as a Sabre. He won a Calder, Vezina and Jennings Trophy here. Barrasso was the first goalie ever to jump from high school straight to the pros, and won the rookie of the year honors in the process. He’s in the United States Hockey Hall of Fame. That’s a good resume, even if it is not a long one. One almost unspoken drawback is that he wasn’t too popular with teammates and fans, and he can’t draw from a reservoir of good will in such considerations. But Barrasso could play.

Thomas Vanek (17): Still playing in the NHL, Vanek was drafted to score goals and he did that – 254 in 598 games as a Sabre. He’ll skate in shortly after retirement as well.

Miroslav Satan (19): The forward spent most of eight years as a Sabre, scoring 224 goals and 450 points in 578 games. Satan was one of the top scorers of some good Buffalo teams in the late 1990s, although that didn’t mean he was one of the league’s top scorers. Certainly, he deserves some consideration.

Alexei Zhitnik (21): The defenseman spent parts of 10 seasons here (712 games), usually as one of the team’s best defensemen. He could score some, and played a lot of minutes on some good teams. Zhitnik might have gotten a little lost because of the attention Hasek received, but he was quite valuable here.

Dale Hawerchuk (22): It’s easy to forget that Hawerchuk had 385 points in 342 games here. In four full seasons, he always had between 77 and 86 points. Hawerchuk’s time here was cut short by injury.

Jerry Korab (23): He spent parts of nine years with the Sabres in two separate stints, playing 537 games in blue and gold. Korab was a rugged defenseman who gave the Buffalo teams of the late 1970s a personality. By the way, he was traded to Los Angeles for a first-round pick – who turned out to be Phil Housley.

Doug Bodger (24): He came to Buffalo from Pittsburgh in the Barrasso trade. Bodger played 479 games here. He generally was good for 35 to 40 points a season on defense. The defenseman was traded to San Jose in 1996, thus missing on the run of success by the team. But he was a solid player, year in and year out.

Jason Pominville (25): He returned here over the summer after spending more than seven full seasons here. He’s still adding to his resume now, and my guess is that he’ll get into the local Hall at some point.

Other names: Pierre Turgeon (27) probably needed to stay here a little longer for inclusion. Ric Seiling (29) suffered an eye injury that hurt his career, but he still was a good two-way forward. Derek Roy (30) had five very good seasons in the late 2000s. Jay McKee (35) had a pretty good run here in playing parts of 10 seasons, and his name will come up in the Hall conversation. Rob Ray (36) is a tough guy to judge on numbers, but he is piling up his credentials through broadcasting and is loved in the community.

Barrasso is the most obvious name missing from the inductee list, and his candidacy certainly was discussed at some point. Has that ship sailed for good? Hard to say. Satan and Zhitnik strike me as borderline cases, but their candidacies might be worth discussing as we wait for Miller and Vanek to become eligible.