You won’t find any cornstalks in the outfield, but you’ll pass some on the drive there. Kevin Costner and James Earl Jones will not be making any appearances, but if invited, maybe they’d show up. George Davis built his field of dreams in Rapids, NY, and little league teams have been coming since 1998.

I hadn’t heard about Harley Field until my son’s team was scheduled to play. I didn’t even look it up, just plugged the address in to the navigation and headed towards Lockport. Little did I know it was in Rapids (didn’t know that existed), and what the kids were about to experience.

The drive takes you a few miles off of Transit Rd. into the country. Every parent on the team  remarked they thought they were lost, because it seemed in the middle of nowhere, and not the usual setting for a little league field. Most fields are within a village or just outside of small town. This was from that.

After deciding to keep going (friendly Siri voice said we were close),about 1/4 mile from the destination I noticed the fence, a tall fence that protects the road, just past right field (165 down the line). It’s not the Green Monster, but similar in idea. The parking lot is in the outfield, much like the player lot at Coca Cola field. We parked, and entered the field through one of two doors in the outfield fence, right and left field, just like bullpen doors. I don’t think my 8 yr old grasped what he was stepping onto when his cleat touched the warning track, but I knew. He, his teammates, and the parents were in for a special day.

The grass was perfect, the infield and warning track were red clay dirt. I have not been to Williamsport, so this was the best little league field I had ever seen. The fence was tall, for the kids, and adorned with sponsors like you’d see in a professional park. There’s a mini water tower with a larger than life baseball sitting on top of it. The scoreboard at Harley Field is old school, green with numbers changed by human hands each inning.

There was a man watering the infield dirt (when’s the last time you saw that at a little league game?) and I walked out to say hello. I introduced myself and asked if he was the owner. “Yes, George Davis, it’s my field and I live right there” he said politely gesturing to his house about 100 yards from the backstop. I asked him to tell me the story about the field because it’s beautiful, and it was obvious he took a lot of pride in it. George proceeded to tell me the story, all while continuing his work. 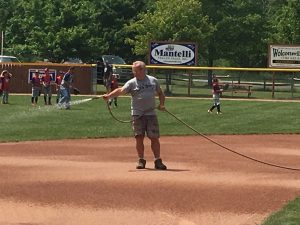 George Davis getting his field ready for play.

In 1998 he was laid off from the GM plant for a month or so, and had time on his hands. He had always dreamed, for 40 years, of having his own ball field. He said he almost bought one a few years before building Harley Field, but figured it needed too much work and wasn’t close enough to his home. He had a decent sized property next to his house (a well kept home) that he purchased as an investment to possibly sell for housing lots in the future. George was thinking ahead, but he did’t see the layoff coming.

It was unexpected for George. He said they usually happened at the plant, but he had never been affected. His name came up this time. So, he was a the local store (the general kind) and got to talking with a friend who asked him what he was going to do with his time. George didn’t know, so his friend suggested he build the baseball field he was always talking about. He offered George the red clay dirt he had in a pile from digging a pond on his property. Another friend came in late to the conversation, heard this, and offered George the use of his old dump truck that took more oil than gas. As long as George kept an eye on the oil, he could use it. Use it he did.

So George invested in some motor oil, cleared his land, hauled dirt, and started Harley Field. It didn’t look like what you see today, but he has added to it every year. Making improvements year after year, adding amenities like a playground and sound system. He mentioned that he charges to use the field, and it’s open to teams outside of Lockport little league for use. He said $50 per team usually gets it done. He uses that money, money from sponsorships, donations, and from his well stocked snack stand to maintain the field. Property taxes, insurance, fertilizer, and line chalk haven’t decreased in cost over the years.

George isn’t doing this for the money, and that is clear from talking to him. He loves baseball, and loves having the next generation play in his backyard. He plays baseball themed music in between innings, and has the best base coaching boxes in all the land.

The personal touches matter too. He stopped by each bench prior to the last inning to ask if and how many kids wanted to buy hot dogs after the game. He wanted to make sure they were ready, knowing kids can sometimes get inpatient when they’re hungry.

We didn’t win the game, but that didn’t damper the experience. It was a treat to play there, and the coaches gathered the team for a picture by the scoreboard. It wasn’t for the kids, it was for all of us parents who loved watching our kids play on this amazing field, secretly wishing we were back in time playing ourselves. That’s what Harley Field is all about. Memories. Memories of old and new.