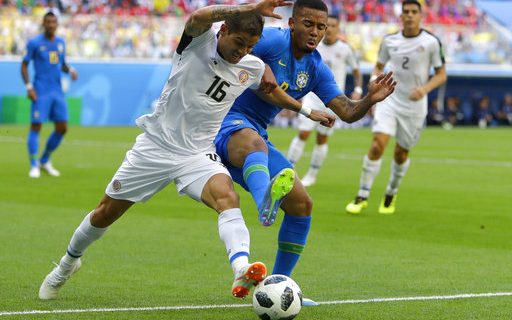 The World Cup is one week into the competition, and contenders are emerging and pretenders are falling aside.  BSP’s Bob Gaughan breaks down the updated odds for taking home the world’s most desired trophy.

1. Brazil: 9-2– Brazil still one of the top favorites but I’m not impressed with how they have played in the first two games. This is a very talented team that wasn’t battle tested coming in. The Swiss played a very physical style and came away with a draw in the first match. Brazil was 0-0 with Costa Rica for 90 minutes in the second before two late goals.

2. Spain: 9-2– Spain has impressed me with their controlling style of play in the first two games. Ronaldo’s hat trick caused a draw against Portugal, but I felt Spain dominated the play for the majority of the match. This team is still the favorite for me.

3. Germany: 6-1– The heart of a champion showed against Sweden playing a man down and coming away with a victory. Toni Kroos’s goal in the 95th minute is one of the goals of the tournament. This being said this team was on the brink of being eliminated in the group stage for the first time in the country’s history. They benched Mesut Ozil after the loss to Mexico. This is way too high of odds for the way this team has played and looked so far.

4. Belgium: 7-1– This is the second best team in the tournament so far. Belgium has looked fantastic in the Group stage. Coming in we knew this was one of the better offensive teams. After scoring eight goals in the first two games I can say this looks like the best offensive team in the tournament. The only question is defense. Tunisia had a ton of good opportunities in their 5-2 loss. If Belgium can tighten up their defense they along with Spain look like the best two teams.

5. France: 8-1-France is 2-0 so far. Coming in I thought this was the deepest team in the tournament. Both of their victories have been by one goal. I didn’t think they looked great against Australia. Peru is better than people think, so that victory was a good one.

6. England: 12-1-Harry Kane’s late goal gave the Brits a good win in their first match against Tunisia. Kane’s flurry of goals in the first two games makes him one of the stars of the tournament. I liked this team coming in. Destroying Panama was expected. Can they handle the pressure of the history of English soccer when the get to the elimination stage?

7. Croatia: 14-1– for my money the third best team in the tournament so far. Their victory over Argentina has drawn more criticism about how Argentina played. The fact is Croatia isn’t getting enough credit for being a good team. They clearly were the better team in my eyes. This is good value at this point for me on a team that looks like one of the best in the tournament.

8. Portugal: 18-1-Ronaldo’s hat trick against Spain has to be one of the great games so far. This was sweet for Ronaldo since the Spain government had recently made him pay a stiff fine for tax evasion. The only downside of the tournament for Portugal is Pepe’s diving. What Americans hate most about the sport is how Pepe flops.

9. Mexico: 20-1– Mexico is 2-0 after victories over Germany and South Korea. Their victory over Germany is one of the biggest upsets in the tournament. The thing people don’t realize about Mexico is they have a great league in Mexico. Since many of their players don’t play around the world this gives them an advantage to practice more often as a national team. This is an underrated team.

10. Argentina: 20-1– This isn’t Messi’s fault. He may get the blame for missing a penalty shot and causing a draw vs Iceland. The fact is this team isn’t that good. They were overrated coming in and were exposed on the public stage by Croatia. Messi is still great but he doesn’t have the talent around him that we thought he had.

Before the World Cup began, Bob gave us his preview.