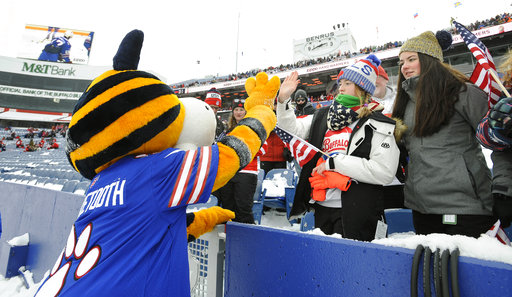 Sabretooth, the Buffalo Sabres mascot, greets fans prior to a preliminary round game between the United States and Canada at the IIHF World Junior Championship in Orchard Park, N.Y., Friday, Dec. 29, 2017. (AP Photo/Adrian Kraus)

The World Juniors hockey tournament is going strong in Buffalo, with the medal round games this week.  But not all the out-of-town fans have been well behaved.  Sports comedian Jeff Wozer checked the police blotters to find out how hockey fans are mis-behaving at the Championship Village.

• Police called to Zippo Warming Area to attend to a domestic dispute between Lauren Hall and Sabre Tooth.

• Lloyd’s Taco food truck driver ticketed for failing to yield to a mascot.

• Drunk Belarus fan arrested for making out with Shark Girl.

• Generic food truck vendor cited for taking advantage of European visitors by claiming leaf on weck is a Buffalo specialty.

• Sabretooth arrested in Zippo Warming Area for not having a concealed t-shirt gun carry permit.