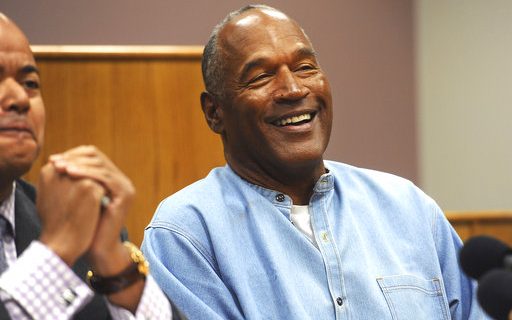 FILE - In this July 20, 2017, file photo, former NFL football star O.J. Simpson laughs as he appears via video for his parole hearing at the Lovelock Correctional Center in Lovelock, Nev. Simpson enjoys living in Las Vegas, and isn't planning to move to Florida like he told state parole officials before he was released in October from Nevada state prison. (Jason Bean/The Reno Gazette-Journal via AP, Pool, File)

This weekend, The Buffalo News printed an exclusive interview that reporter Tim Graham conducted with O.J. Simpson.  But of course, Buffalo Sports Page humorist Jeff Wozer has discovered some surprise revelations in the interview.

• During the year he rushed for 2,003 yards he, before every game, lined his jock with Weber’s horseradish mustard.

• Still claims Mark Zuckerberg stole from him the idea for Facebook.

• Seven out of the nine years in Nevada’s Lovelock Correctional Center he won the prison’s Punt, Pass & Kick competition.

• Thanks to make-up no one knew he was the Catman drummer for the band Kiss.

• He wrote a letter of recommendation on Al Cowling’s behalf helping him get hired as an Uber driver.

• Earned good money in prison selling handmade shivs made out of melon rinds on Etsy.

• Was the Channel 7 voice who asked, “It’s 11 o’clock do you know where your children are?”

• Parole was only granted after he apologized for helping the Kardashian’s become famous.