Wozer: Other Highlights At The NHL All-Star Game 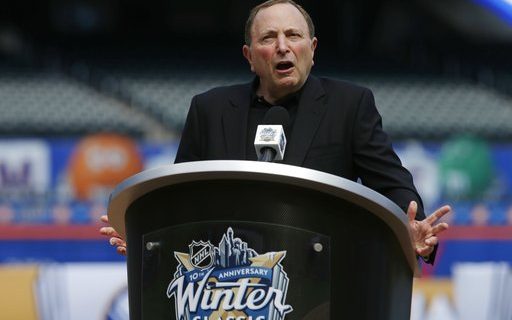 NHL Commissioner Gary Bettman connected to Destiny's Child? There were other highlights at the All-Star Weekend, according to sports humorist Jeff Wozer. (AP Photo/Frank Franklin II)

The hockey world gathered this weekend in San Jose, CA for the annual NHL All-Star Game.  There was a skills competition, and the game.  But there were other highlights, according to sports humorist Jeff Wozer.

• Commissioner Gary Bettman revealing he was the inspiration behind Destiny Child’s “Bootylicious.”

• The Metropolitan Division is renamed the Non-Rural City Boy Division.

• The first ever street hockey game on San Francisco’s famed Lombard Street called after 11 minutes due to all the street hockey balls rolling down the hill.

• Game delayed for 19 minutes while officials searched for puck in Brent Burns’ beard.

• Commissioner Bettman giving NHL players the okay to participate in the 2020 Summer Olympics.

• NHL announcing next year’s All-Star game will retain the 3-on-3 format but while a Zamboni circles the ice.