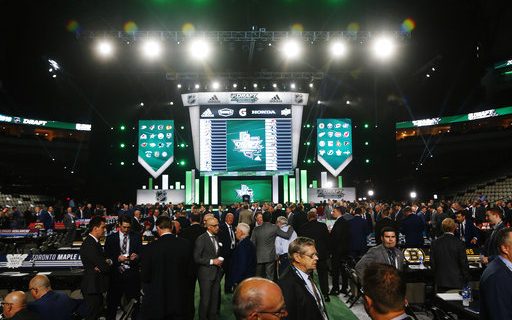 It was an exciting NHL Draft in Dallas, as the Sabres made Rasmus Dahlin the first overall pick and a future cornerstone of the franchise.  But not everything said at the draft table is about players and scouting.  Sports humorist Jeff Wozer has discovered the top things overheard at the teams draft table.

“Tim Murray is on the phone – he wants his job back.”

“I can’t believe I’m missing the World Cup for this.”

“If you see the arena manager tell him our draft table is wobbly.”

“Look Terry and Kim! You’re on the Jumbotron’s kiss cam!”

“Where’s Botterill? We can’t get seated at a draft table with an incomplete party.”

“Damn. I must have lost a loafer tassel during our pre-draft soccer warm-up.”

“Any interest in hiring Trevor Hoffman’s girlfriend as our Social Media Director?”

“It’s Sabre Tooth on the phone. It just woke up in a south Texas motel room with one of its kidneys missing.”

Jeff also has some ideas about what Jason Botterill likes about being GM, and signs the Sabres will make Rasmus Dahlin feel at home.