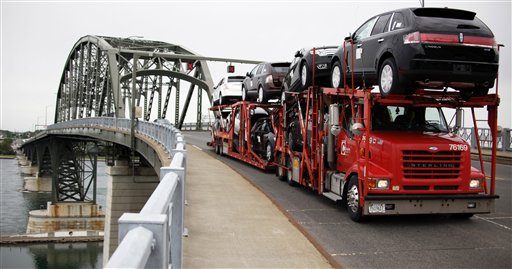 Jeff Wozer thinks teaching the Bills rookies how to properly cross the Peace Bridge should be part of their training about how to be a good WNYer. (AP Photo/David Duprey, File)

The Buffalo Bills recently took their rookie class to a local school, and a trip to the New Era Cap headquarters. It’s all part of getting them used to living and working in WNY.  But sports humorist Jeff Wozer has discovered the top rejected ideas of Bills management for getting those new players familiar with Buffalo.

• Toss water balloons from an adjacent building at Kevin O’Connell during his rooftop weather forecast.

• Man a booth at the Allentown Art Festival selling crap made from popsicle sticks.

• Get loaded on growlers of Labatt’s and then heckle Fantasy Island’s Wild West Shootout actors.

• File a trademark for “If I hear respect the process one more time I will pierce my eardrums with a meat thermometer.”

Jeff has been busy, discovering signs that you’ve joined a bad country club and that you’re kid has a bad Little League coach.