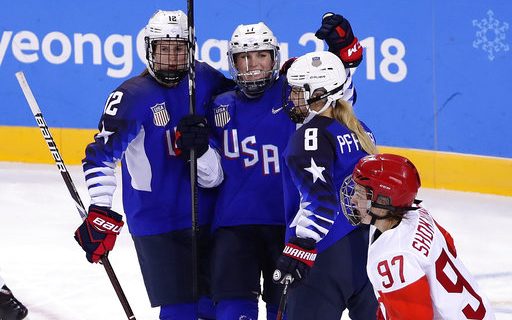 Jocelyne Lamoureux-Davidson, center, celebrates with Kelly Pannek, left, and Emily Pfalzer, of the United States, after scoring a goal during the second period of the preliminary round of the women's hockey game at the 2018 Winter Olympics in Gangneung, South Korea, Tuesday, Feb. 13, 2018. (AP Photo/Frank Franklin II)

Buffalo’s Emily Pfalzer is a member of the USA Olympic Women’s Hockey team competing in South Korea at the Winter Olympics.  According to sports comedian Jeff Wozer, Pfalzer has discovered some shocking surprises during her time in Pyeongchang.

• Her Tops Bonus Card gets her immediate access to any Olympic Village party.

• Terry Pegula offered her a $25 finders fee if she hears of any new teams he can buy.

• Curling athletes get mad when you use their brooms to sweep dorm room floors.

• Even the South Korea press asks, “What was up with that weird Eric Woods retirement press conference?”

Jeff also wrote about what former Sabres captain Brian Gionta is experiencing during his time at the Olympics.