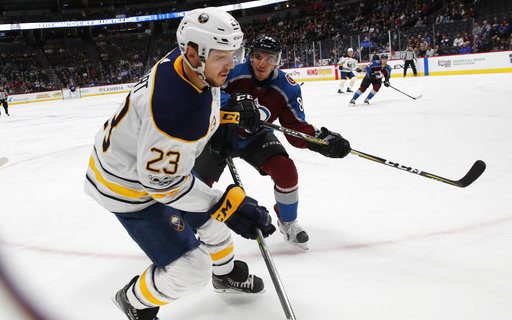 Buffalo Sabres center Sam Reinhart (23) is still looking for a new contract. Sports humorist Jeff Wozer has some ideas about why the negotiations have stalled. (AP Photo/David Zalubowski)

The Sabres are set to start training camp in a few weeks.  One big offseason situation has not been addressed:  A new contract for restricted free agent Sam Reinhart.

Sports humorist Jeff Wozer has discovered some of the reasons why the negotiations have stalled.

• Terry and Kim Pegula too distracted with securing a minor league affiliate for the Buffalo Beauts – the Rochester Cutes.

• After every home game Reinhart tired of having “Sabre Dance” stuck in his head.

• Reinhart keeps sabotaging negotiations by asking himself, “What would Dez Bryant do?”

• For the team’s next parents trip Sabres won’t allow him to instead take his imaginary friend Larry.

• Reinhart angry Canalside is building a Children’s Museum rather than a Hooters.

• The Sabres $30-million incentive offer if he wins the Vezina Trophy.

• Reinhart can’t get his attorney, Michael Cohen, to return his calls.

• Reinhart miffed that Bud Bailey never considered him in his “Buffalo Sports by the Numbers” piece for jersey #23.

Jeff has also uncovered why Jeff Skinner waived his no trade clause to come to Buffalo.