Wozer: Top Items on Jalen Ramsey’s To Do List 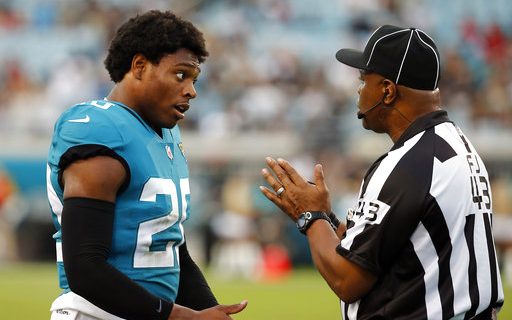 Jacksonville Jaguars cornerback Jalen Ramsey, left, has a discussion with field judge Terry Brown (43) during the first half of an NFL preseason football game against the New Orleans Saints, Thursday, Aug. 9, 2018, in Jacksonville, Fla. (AP Photo/Stephen B. Morton)

So sports humorist Jeff Wozer has worked hard to uncover what else Ramsey has to do, on his To Do list.

• Ask Jersey Shore if it needs another annoying cast member.

• Rescue image by dancing on Ellen.

• Pound on Marcell Dareus’ door for 20 minutes make sure he’s not late for practice.

• Notify Fox Sports that I’m available if it ever needs an obnoxious blowhard to fill in for Skip Bayless.

• Ask Omarosa out on a date.

• Consider appearing in Geico TV ad featuring the line, “As long as Jalen Ramsey comes across like a pompous windbag you can count on Geico saving folks money.”